The acting US defense secretary cited Iranian leaders' threats against President Donald Trump and other US officials in the order for the USS Nimitz aircraft carrier to remain in the Middle East. 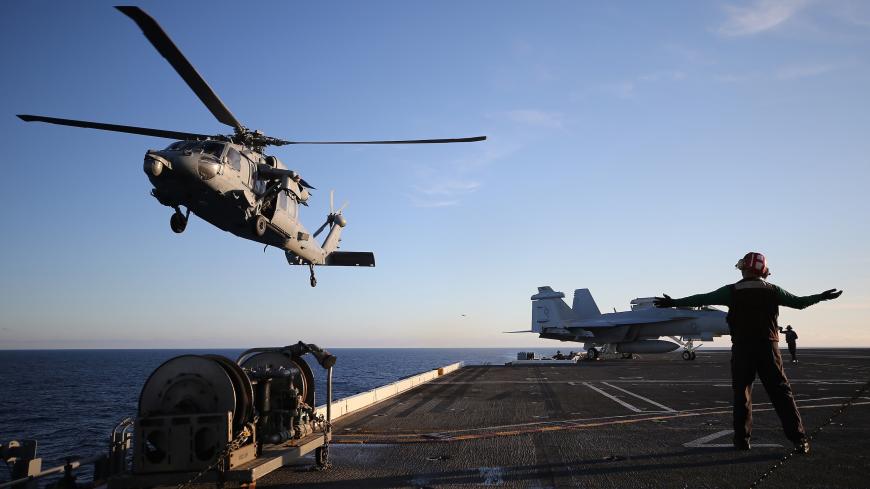 A US Navy helicopter descends to land on the flight deck of the USS Nimitz (CVN 68) aircraft carrier while at sea on Jan. 18, 2020, off the coast of Baja California, Mexico. - Mario Tama/Getty Images

The Pentagon ordered the USS Nimitz aircraft carrier to remain in the Middle East on Sunday, citing threats by Iranian leaders against President Donald Trump and other US officials.

Acting US Defense Secretary Christopher Miller’s decision reverses an order he issued just three days prior, overruling top Central Command officials to bring the ship home in a de-escalatory gesture toward Iran. While in the region, the Nimitz also lent support to the ongoing US troop drawdown from Somalia that began last month.

Washington has put its overwhelming military power in the region on display in recent weeks, dispatching B-52 bombers as well as a guided-missile submarine and cruisers into the Persian Gulf while extending the Nimitz’ now 10-month-long deployment at sea.

The show of force was intended as a warning to officials in Tehran ahead of yesterday’s anniversary of the US assassination of Iranian Maj. Gen. Qasem Soleimani, an act for which Iranian leaders have continued to promise revenge.

“Due to the recent threats issued by Iranian leaders against President Trump and other U.S. government officials, I have ordered the USS Nimitz to halt its routine redeployment,” Miller said in a statement issued Sunday night.

Hard-line Iranian officials have made public threats against US officials in recent weeks as the Islamic Republic commemorates the killing of Soleimani, who commanded the Islamic Revolutionary Guard Corp’s elite Quds Force.

Thousands of pro-Iran demonstrators rallied in Iraq’s capital yesterday to commemorate the deaths of the Iranian spymaster, his Iraqi protégé Abu Mahdi al-Muhandis and eight other people killed in a US drone strike outside Baghdad International Airport on Jan. 3, 2020.

Iranian President Hassan Rouhani compared Trump to the Islamic Republic’s old enemy, Saddam Hussein, the former dictator of Iraq who waged a brutal eight-year war against Iran. In a statement last week to Iran’s cabinet, Rouhani said that Trump’s legacy would soon end and be left to the “dustbin of history.”

An English translation on the Iranian presidency’s website seemed to suggest Rouhani was threatening Trump’s life.

“It is a mistranslation,” Juan Cole, a professor of Middle Eastern history at the University of Michigan and commentator on regional affairs, told Al-Monitor via email. “Rouhani says the life of Trumpism and of this administration will come to an end. It isn't a threat. At all.”

US officials have cited intelligence assessments that Iran moved short-range ballistic missile technology into Iraq in recent weeks and that Quds Force figures have met with Iraqi militia officials as a sign that Tehran’s proxies may be preparing to strike US personnel, though other officials have disputed the evidence.

Hezbollah leader Hassan Nasrallah suggested last week that revenge for Soleimani’s killing would be carried out through Iran’s proxies in the region, but said the remaining days of Trump’s presidency should be approached carefully.

Iran and the Trump administration have been locked in a heated strategic game in the Middle East. US officials accuse Tehran of exploiting the limited 2015 nuclear deal to expand its ballistic missile program and to pass military technology to proxy militias in Iraq, Yemen and Syria — moves that the United States says threaten its partners in the region, including Saudi Arabia and Israel.

The Trump administration walked out of the international agreement in 2018 and launched a campaign of economic sanctions against Tehran, aiming to drain the Islamic Republic’s financial ability to project military influence in the region.

President-elect Joe Biden wrote in September that his incoming administration will seek to rejoin the nuclear deal “as a starting point” for additional negotiations if Iran returns to “strict compliance.” Rouhani has said his government is willing to rejoin the deal but that Tehran’s regional influence efforts and ballistic missile program will remain separate from talks over rejoining the nuclear agreement.

“Our view… is that Iran’s ballistic missile program has to be on the table as part of that follow-on negotiation,” Jake Sullivan, Biden’s pick for National Security Advisor, said on CNN yesterday.

Tehran has publicly and incrementally violated the nuclear deal’s prohibitions in response to the Trump administration’s withdrawal from the agreement and sanctions.

An Iranian government spokesman said Monday that Tehran had begun to enrich uranium at its Fordow nuclear facility to 20% — more than five times higher than levels it committed to in 2015, but still far from the purity levels required to produce a nuclear weapon.