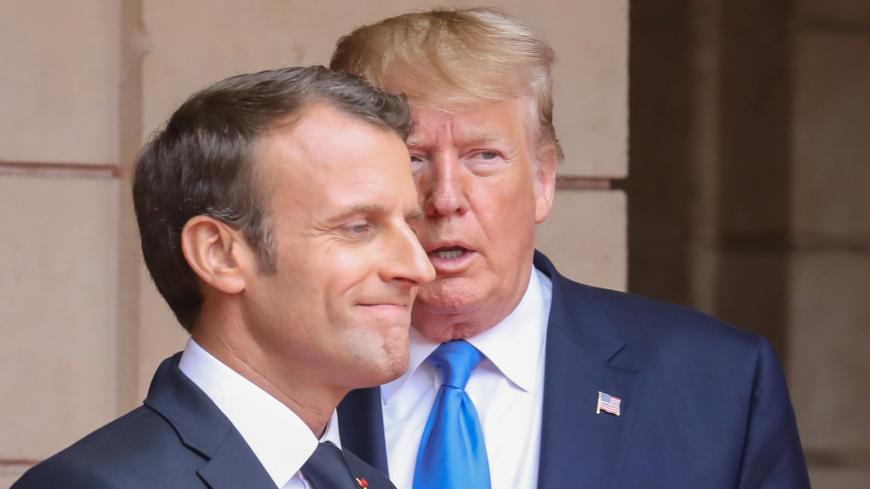 French President Emmanuel Macron speaks with US President Donald Trump ahead of a meeting at the Prefecture of Caen, on the sidelines of D-Day commemorations marking the 75th anniversary of the World War II Allied landings in Normandy, France, June 6, 2019. - Ludovic Marin/Pool via REUTERS

US President Donald Trump spoke with French President Emmanuel Macron about Iran today for the second time in a week, as Macron prepared to send his top diplomatic adviser back to Iran.

The intensified consultations come as the UN atomic watchdog agency confirmed reports that Iran had increased the level of its uranium enrichment to a slightly higher degree of purity than that permitted under the 2015 Iran nuclear deal.

Trump and Macron “discussed ongoing efforts to ensure that Iran does not obtain a nuclear weapon and to end Iran’s destabilizing behavior in the Middle East,” the White House said in a readout of the July 8 call.

Macron also held a phone call with Iranian President Hassan Rouhani July 6, during which they discussed ideas for renewed dialogue to try to lower tensions. Iran in the past several days has reduced compliance on two aspects of the nuclear pact in response, it says, to the failure of the other parties to the deal to find a workaround to a virtual US blockade on Iran’s oil exports.

Macron and Rouhani “agreed to explore, between now and July 15, the conditions for a resumption of dialogue involving all the parties,” a French readout of the Macron-Rouhani call said. “In the coming days, President Macron will continue his consultations with the Iranian authorities and the relevant international partners to de-escalate tensions related to the Iranian nuclear issue.”

“France is deeply concerned by Iran’s announcement that it has begun producing enriched uranium over the 3.67% limit set by the Joint Comprehensive Plan of Action (JCPOA),” the French Ministry of Foreign Affairs said July 7. “France is in close contact with concerned partners to initiate the necessary de-escalation of tensions related to the Iranian nuclear issue.”

Emmanuel Bonne, Macron’s top diplomatic adviser, is scheduled to make his second trip to Iran on Tuesday in the past few weeks, after assuming the job only in May. Bonne’s predecessor, Philippe Etienne, arrived this month in Washington as France’s new ambassador to the United States. France’s political director and longtime Iran nuclear deal negotiator, Nicolas de Riviere, took up his post today as France’s new ambassador and permanent representative to the UN in New York.

Macron said last month that he would propose to Trump at the G20 meeting in Japan that the United States consider relaxing some US oil sanctions in an effort to try to get the Iranians to come to the table for negotiations.

“I want to convince Trump that it's in his interest is to reopen a window on the negotiation process — maybe to reconsider some of the sanctions decisions, just for the time while we give the negotiations a chance," Macron said ahead of the G20 summit in Japan June 27.

“We have seen Macron discuss with Rouhani yesterday some ideas,” Malley, now head of the International Crisis Group, said on a call today with journalists.

A near-term de-escalation idea that third-party mediation could try to advance would be a “mutual freeze,” under which the United States might reinstate some waivers for Iran to export its oil, and Iran might agree to stop some regional provocations and resume compliance with the JCPOA, Malley said.

“Then perhaps you could think of the kinds of more ambitious negotiations … but which … are probably premature given the level of distrust between Iran and the United States,” Malley said. “The alternative is very clearly continued escalation … and at some point, a collision course, that President Trump doesn’t want, that Iran doesn’t seem to want, but which seems inevitable because of the steps each side is taking.”

Such an interim freeze “would be the best outcome,” Malley said, “but that does not make it the most likely.”

The Trump administration, however, has given little public indication to date that it would be willing to consider steps to ease its maximum pressure campaign to de-escalate with Iran or get to the table. The United States would like Iran to abide by the deal the United States withdrew from a year ago, and relentlessly criticized, without offering any path to a viable alternative.

“Fundamentally, we want them to stay in the deal,” a US official told Politico, regarding Iran, explaining that is why the United States has not objected to European efforts to set up the INSTEX financing mechanism to facilitate humanitarian trade with Iran.

“Iran’s latest expansion of its nuclear program will lead to further isolation and sanctions,” Secretary of State Mike Pompeo wrote on Twitter July 7. “Nations should restore the longstanding standard of no enrichment for Iran’s nuclear program. Iran’s regime, armed with nuclear weapons, would pose an even greater danger to the world.”

The United States has called for a special session of the International Atomic Energy Agency (IAEA) board of governors for July 10 to discuss Iran’s exceeding of the 300-kilogram cap on its low enriched uranium stockpile and increased level of uranium enrichment, which the IAEA confirmed today.

IAEA “Director General Yukiya Amano has informed the IAEA Board of Governors that Agency inspectors on 8 July verified that Iran is enriching uranium above 3.67% U-235,” IAEA spokesman Frederik Dahl said today.

Russia’s envoy to the IAEA took to Twitter to mock the US request for a special session, and suggested Iran’s enrichment cap and level is a matter that should be handled by the Joint Commission that oversees implementation of the nuclear deal that the United States withdrew from.

“It will be a special session indeed in a sense that its subject matter (voluntary commitments of Iran) hardly has direct relation to the Board’s mandate,” Russian ambassador to the IAEA Mikhail Ulyanikov tweeted July 8.

“The limits on amount and level of enrichment of low enriched uranium in #Iran represent voluntary commitments of Tehran under JCPOA,” Ulyanikov wrote. “Therefore deviations from these commitments relate to the competence of the Joint Commission on JCPOA only. The Commission already discussed them.”

Iran could reverse the steps it has taken and return to full compliance with the JCPOA if the other parties fulfill their obligations, a top adviser to Iran’s supreme leader said.

“If they return to fulfilling the commitments they have accepted, we will also return,” Ali Akbar Velayati, foreign policy adviser to Ayatollah Ali Khamenei, said in an interview published on Khamenei’s website July 8. “Otherwise, things will go on and there will be a series of rational and gradual acts of engagement.”

But in one sign the Trump administration may be seeing if the intensified diplomatic efforts bear fruit: a US official told Al-Monitor that he did not expect a sanctions designation of Iranian Foreign Minister Mohammad Javad Zarif at this time.