With only weeks to go until US President Donald Trump faces a deadline to sign sanctions waivers, the nuclear deal with Iran could go very different places. 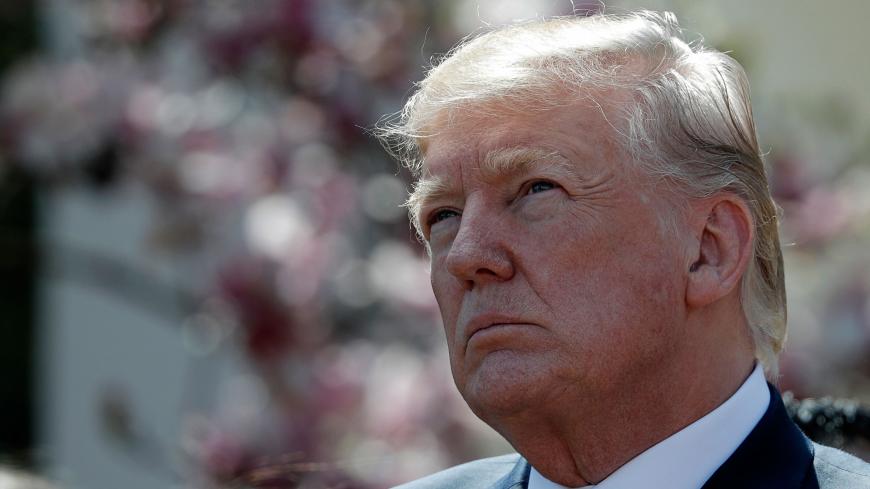 US President Donald Trump listens during an event on tax cuts in the Rose Garden of the White House, Washington, April 12, 2018. - REUTERS/Carlos Barria

President Donald Trump’s tapping of Mike Pompeo and John Bolton for secretary of state and national security adviser, respectively, should do away with any pretense that the US administration wishes to “fix” the Joint Comprehensive Plan of Action (JCPOA). While Trump has long telegraphed his desire to undo the nuclear deal, Pompeo and especially Bolton have long advocated regime-change policies toward Iran, including war. As the May 12 deadline for Trump to renew sanctions waivers under the JCPOA approaches, five scenarios exist for how Trump’s “fix it or nix it” saga on the accord will play out.

The first possible scenario is that Europe gives in to Trump’s demands and agrees to new sanctions on Iran over its regional activities and ballistic missile program. In this case, Iran will benefit even less from the nuclear deal, especially given how much of its JCPOA-ordained sanctions relief has already been stymied by US sanctions and threatening rhetoric. Even in this scenario, there is no assurance that Trump will still not seek other ways to kill the deal. For instance, Iran may choose to remain in the deal but would retaliate against regional sanctions by forgoing any regional cooperation with the West. In recent months, Iranian diplomats have met with their European counterparts to discuss regional issues, including in London and Munich. Hamid Baeidinejad, Tehran’s ambassador to London, recently stated, “Iran and Britain have made important decisions to take action to end this [the Yemeni] crisis.” If Europe joins in on new non-nuclear sanctions, this vital diplomatic path that has started may be suspended.

The second potential scenario is that Trump follows through on his rhetoric, withdraws from the JCPOA but chooses not to block European business dealings with Iran through secondary or extraterritorial sanctions. In this scenario, Iran’s response will depend on the reaction of the remaining powers that negotiated the deal. If Russia, China and, most importantly, Europe act proactively to uphold the JCPOA and oppose further US efforts to undermine it, Iran will be incentivized to remain in the agreement. However, Trump would kill chances for US-Iran regional dialogue and cooperation with Iran and increase Iranian opposition to US interests in the region. Given that the United States is entangled in several quagmires, including Afghanistan and Yemen, Iran could — instead of potentially facilitating face-saving solutions that allow for an American departure — seek to increase the cost of America’s presence.

Third, Trump may withdraw from the JCPOA and reimpose all US nuclear-related sanctions, including secondary sanctions targeting international trade with Iran. In this case, European trade with Iran might collapse, leaving Iran with what would be in effect a JCPOA minus the entire West — and not just the United States. European countries will find it difficult to resist the United States, and any token measures they take to placate Iran will not make a difference. Thus, Iran will be left with the option of leaving the JCPOA but remaining in the nuclear nonproliferation treaty (NPT). This would terminate the voluntary nuclear transparency measures Iran has agreed to under the JCPOA, such as its implementation of the Additional Protocol to its International Atomic Energy Agency (IAEA) safeguards agreement and the limits on its uranium enrichment program — including its commitment to restrict enrichment to below 5%. For example, Iran’s nuclear chief Ali Akbar Salehi has said that if such a decision is made by Iran’s establishment, Iran will “only need four days to ramp up 20% enrichment” at its fortified Fordow nuclear facility. Russia and China will be more open to an Iranian nuclear program confined to the NPT if Trump is to blame for the JCPOA’s failure, not Iran. The United States will not, however, and can be expected to push for harsher coercive policies short of war — leading Iran into greater alignment with Russia and China in confronting Western aims in the Middle East and beyond.

The fourth potential scenario is for Trump to leave the JCPOA and pursue an agenda of bringing maximum pressure on Iran, including paving the way for war. This will spur powerful voices in Iran to push for withdrawing from the NPT and follow the North Korean model to bring the United States to the negotiating table. In other words, the conventional understanding regarding North Korea is that the United States will not attack it because it has nuclear weapons, and the reason Trump now wants to negotiate with North Korea while he is increasing pressure on Iran is that the former has nuclear weapons. The strength of the case for this option would not be little in Tehran, as its adherents can argue Iran has not been afforded its rights under NPT rights and that the treaty has in effect become a vessel for punishing Iran. There will also be a greater chance that Iranian military commanders will take steps to play a greater role in the country’s politics to confront warmongers in Washington, Tel Aviv and Riyadh. This scenario would mark the worst point in the history of US-Iran relations and heralds the potential for another devastating Middle Eastern conflict that would dwarf the costs of the Iraq war for the United States.

The fifth and the most prudent scenario is that Europe convinces Trump to fully implement the JCPOA in return for the European powers — along with possibly the United States, China and Russia — engaging Iran in serious negotiations over regional disputes. The fact is that Iran has fully abided by its commitments under the agreement, as has been repeatedly verified by the IAEA, and the JCPOA is an international obligation for the United States as it was endorsed by a UN Security Council resolution. This scenario holds the prospect of finding political solutions to regional crises that would address Trump’s long-time accusation of malignant Iranian designs in the region. It would also allow for progress on efforts to build on the JCPOA and establish a formal regional nuclear weapons-free zone.