Pompeo visits CENTCOM amid mixed messaging from US on Iran

In a strange move for a top US diplomat, Mike Pompeo visited a US military command solo to avow that the United States doesn't want war with Iran. 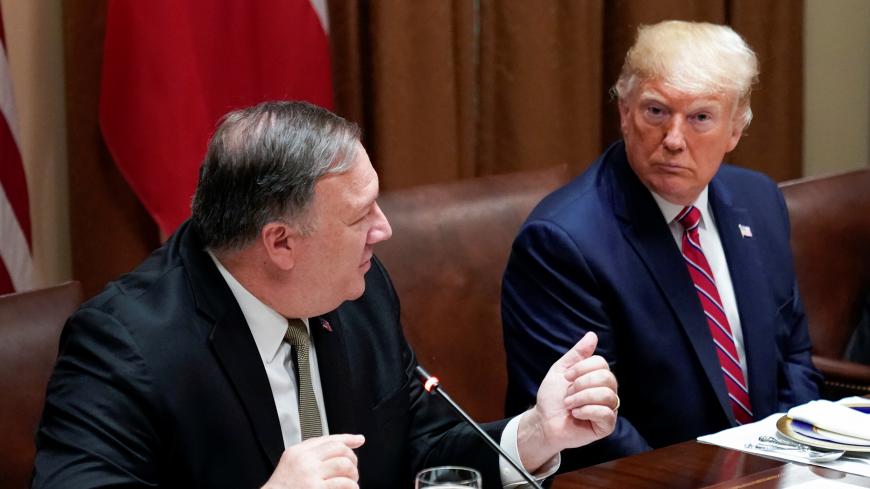 US President Donald Trump listens to Secretary of State Mike Pompeo during a lunch meeting with Poland's President Andrzej Duda in the Cabinet Room of the White House in Washington, US, June 12, 2019. - REUTERS/Kevin Lamarque

WASHINGTON — Even as he raised eyebrows by making an unusual visit to US Central Command headquarters in Tampa, Florida, Secretary of State Mike Pompeo found himself today stressing that President Donald Trump does not want war, in the latest confusing rollercoaster of US-Iran escalation and slight easing of tensions.

“President Trump does not want war, and we will continue to communicate that message while doing the things that are necessary to protect American interests in the region,” Pompeo told journalists at MacDill Air Force Base in Florida.

Asked if the US administration has used third countries to deliver messages to Iran to try to de-escalate tensions, Pompeo affirmed that it had.

“We have been engaged in many messages,” Pompeo said. “Even this moment right here, communicating to Iran that we are there to deter aggression.”

But Pompeo’s message about restoring deterrence was delivered, confusingly, in a US military hangar that seemed intended to project the optics of the nation’s top diplomat conferring with US military officers. Adding to the confusing messaging, it came as Trump announced on Twitter that his nominee to be secretary of defense, Patrick Shanahan, was withdrawing from consideration amid past allegations of domestic abuse in his family.

In a short statement, Shanahan said he had asked President Trump to withdraw him from consideration to be nominated as permanent secretary of defense and would be resigning from his Senate-confirmed deputy role, after forming a transition plan.

Army Secretary Mark Esper will take over Shanahan’s role on an acting basis, and the powerful Senate Armed Services Committee Chairman Jim Inhofe, R-Ok., told reporters the former Raytheon lobbyist is likely to be nominated for the full post. The New York Times reported that Pompeo and Navy Secretary Richard Spencer are among others on the short list.

“The secretary’s job is to go over these things and review them,” said a former defense official. “The one thing he’s very good at is saying that he has this capability or he doesn’t have this. He’s very focused on what the boss wants and giving it to him.”

Pompeo, speaking in Tampa today shortly before Shanahan’s nomination was pulled, gave no indication he was auditioning for the Pentagon chief job. But it was unusual for a secretary of state to visit a US military command without a Defense Department civilian counterpart.

Pompeo said his visit’s goal was to better US diplomatic and military coordination.

“The purpose of my visit was to come down here and make sure that the State Department and the Department of Defense were deeply coordinated across a whole broad range of issues … to make sure that when we present options, alternatives, policy recommendations to President Trump, we’re doing so in a way that is coherent and consistent and leads the president to a fuller understanding of the challenges and opportunities connected to decisions that he makes,” Pompeo said.

“We talked about the CENTCOM decision … to move a thousand more Americans into theater to make sure that we’re in the position to do the right thing, which is to continue to work to convince the Islamic [Republic] of Iran that we are serious and to deter them [from] further aggression in the region,” he said.

The Trump administration’s maximum pressure campaign on Iran, he added, has “been very effective, and now we need to make sure that we continue to do that so that we ultimately get the opportunity to convince Iran that it’s not in their best interests to behave in this way.”

Trump himself, speaking to Time magazine in an interview Monday, downplayed attacks on two oil vessels in the Gulf of Oman last week that his administration has attributed to Iran. The United States is increasingly less dependent on Middle East energy supplies, he noted, and suggested his main concern about Iran was its nuclear program.

“Other places get such vast amounts of oil there,” Trump told Time. “We get very little. … So we’re not in the position that we used to be in in the Middle East.”

Pompeo in Tampa today also stressed it was in the interest of other countries with greater dependence on Middle East energy to protect freedom of movement in the Persian Gulf.

“China … depends enormously on energy transiting the Strait of Hormuz,” Pompeo said. “You have South Korea, Indonesia, Japan, all of whom have an enormous interest in ensuring there’s freedom of navigation throughout this waterway. The United States is prepared to do its part, but every nation that has a deep interest in protecting that shipping lane so that energy can move around the world and support their economies' needs to make sure they understand the real threat … to their interests in the region, and the real threat to their countries’ economies if we’re not successful in doing that.”

The Trump administration’s episodic messaging, one day emphasizing the Iranian threat, the next projecting desire to de-escalate tensions, is not perfect, one senior US administration official, speaking not for attribution, acknowledged to Al-Monitor.

More broadly, Trump does not seem to know what a serious negotiation strategy with Iran would entail, or how to get to one, said Dalia Dassa Kaye, the director of the Center for Middle East Public Policy at the Rand Corporation.

“There is a disconnect between [US Iran] policy on the ground, and the episodic messaging that Trump wants to talk,” Kaye told Al-Monitor. “There seems to be a lot of confusion about how you get from Point A to Point B.”

“They don’t know either,” said former State Department Iran negotiator Richard Nephew of the administration’s signalling regarding its intentions on Iran. “They have five different policies per four principals.”

“The reason I am worried about escalation is it is hard to see what those off ramps are,” said Phil Gordon, former National Security Council Middle East adviser during the Barack Obama administration, on a call hosted by the Council on Foreign Relations today.

“The latest developments really carry a real risk of miscalculation and the risk of escalation is also real,” the EU official, speaking not for attribution, told journalists in Brussels today. “It’s very clear no one wants it to happen … but because there is no meaningful conversation, no channels, no hotline among countries in the region … everyone is really worried. This is why the EU is calling for maximum restraint.”

“There's an immediate need for channels to facilitate communication,” the EU official continued. “The focus needs to be on dialogue channels and on de-escalation.”

Pompeo was due to meet with EU foreign policy chief Federica Mogherini in Washington tonight, and then to host members of the Senate Foreign Relations Committee for dinner at the State Department.