GOP lawmakers insist that Trump’s show of force is the best way to prevent an immediate Iranian attack, even as a long-term solution to tensions remains elusive. 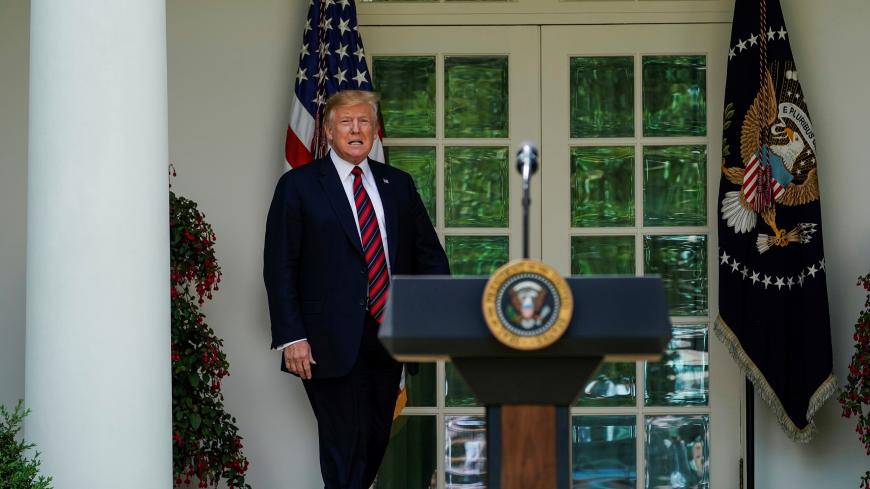 US President Donald Trump arrives to deliver remarks on immigration reform in the Rose Garden of the White House in Washington, US, May 16, 2019. - REUTERS/Joshua Roberts

Republicans are scrambling to tamp down talk of war with Iran amid increasing concerns that the Donald Trump administration’s maximum pressure campaign could inadvertently provoke a conflagration.

With Democrats and right-wing pundits alike warning of a disastrous repeat of the 2003 invasion of Iraq, GOP lawmakers are defending the president as a cool-headed statesman whose show of resolve is the best guarantee against further escalation.

Trump himself has sought to cool tensions, asking Iran’s leaders to call him to make a deal. “I hope not,” he told reporters today when asked if war was coming.

“It’s close to inconceivable that the president, the administration would consider a war with Iran,” Senate Middle East panel Chairman Mitt Romney, R-Utah, told reporters on Wednesday, while also insisting that Trump “is showing strength to suggest that’s not something we will accept.”

“The president made it clear when he ran for president that one of the worst foreign policy mistakes in American history was the decision to go to war with Iraq,” Romney said. “And that we would repeat that [is] unthinkable and something I can’t imagine the president or his senior staff would consider.”

Even relatively dovish Republicans applauded the US decision to send an aircraft carrier group and B-52 bombers to the Gulf and pull US Embassy staff out of Iraq amid what the United States says are worrying signs from Iranian proxies.

“I’m comfortable that it is a well-thought-through strategy to make sure that Iran doesn’t continue its adventures,” said Rep. Ken Buck, R-Colo., a member of the conservative House Freedom Caucus who cosponsored a resolution forcing Trump to end US support for the war in Yemen. Buck argued that “Iran isn’t going to test us” to the point that a military conflict would ensue.

He pointed to Trump’s partial military withdrawal from Syria as evidence that Trump is eager to avoid a war despite this week’s escalation.

“This president does not get enough credit for what he’s been doing in Syria and Afghanistan in drawing down forces and trying to de-escalate conflicts,” said Buck. “He hasn’t started any in the two years he’s been there, and I don’t think he’s looking for a fight.”

The Washington Post reported Wednesday that Trump has grown frustrated with national security adviser John Bolton and Secretary of State Mike Pompeo as their hawkish posture risks spiraling out of control. The State Department revealed today that Pompeo had spoken Wednesday with Sultan Qaboos of Oman, a longtime back channel between the United States and Iran.

Republican lawmakers who have been briefed about the latest intelligence also expressed trust in Trump’s response.

“I am convinced that the information and warnings that we have collected are of greater concern than the normal Iranian harassment activity that we’ve seen in the Persian Gulf and surrounding area,” said Rep. Mac Thornberry, R-Texas, the top Republican on the House Armed Services Committee, which has been briefed by both the Pentagon and intelligence agencies. “I don’t think it’s business as usual.”

The administration was also scheduled to brief both parties’ leaders in the House and Senate as well as leaders of the intelligence committees today. Officials are expected to brief the full Senate next week.

The New York Times reported Wednesday that Bolton’s statement earlier this month citing an increased threat from Iran-backed proxies emerged from photographs showing Iranian forces loading missiles on small boats in the Gulf. But their significance has prompted a debate among officials within the White House, Pentagon and CIA.

“It’s good and important to make clear to Iran not only through words, but through actions, that they cannot attack us with impunity,” said Thornberry. He expressed hope that “Iran decides it’s not worth attacking us or Americans and that they can be deterred from doing so.”

Senate Foreign Relations Committee Chairman James Risch, R-Idaho, also told reporters Wednesday that “we need to back the administration” in its maximum pressure campaign against Iran.

“The administration is doing what they should be doing,” said Risch. “It’s been the policy of the United States of America to do everything we can to convince those people that they need to change their conduct.”

Asked by Al-Monitor about the risk of a military altercation, Risch said, “We don’t want to talk about that.”

But Democrats counter that the Trump administration’s stated goal of forcing a new negotiation with Iran after the United States pulled out of the 2015 nuclear deal remains but a distant dream. And in the meantime, a miscalculation by either side is always a possibility.

“What if this is exactly where the Iran hawks in the administration and throughout Washington want us to be?” Senate Foreign Relations committee members Chris Murphy, D-Conn., and House Intelligence Committee member Jim Himes, D-Conn., wrote this week in a USA Today op-ed. “They understand that the American people would not support a preemptive, considered attack on Iran. But they might support retaliation if a nervous Iranian sailor points a weapon at nearby American naval forces.”