The House and several Republican senators are ready to move on a harsh Turkey sanctions package, but Senate leadership is more cautious. 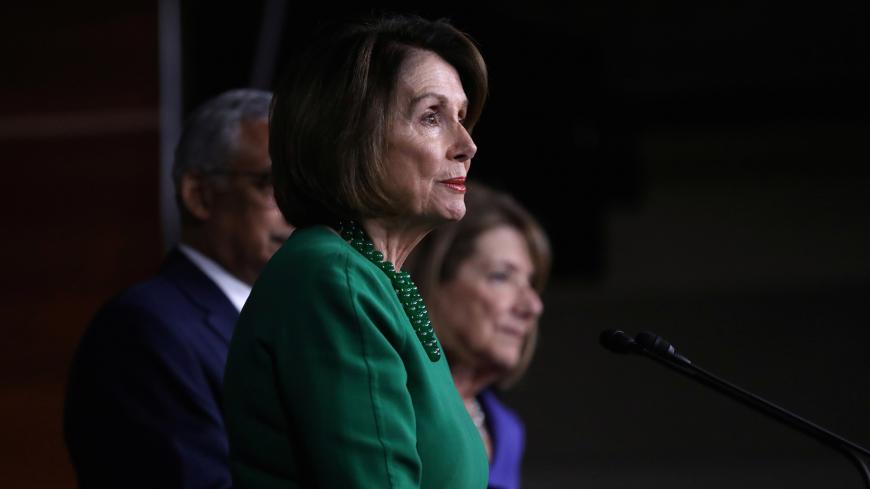 US House Speaker Nancy Pelosi takes part in a press conference about the College Affordability Act on Capitol Hill in Washington, US, Oct. 15, 2019. - REUTERS/Leah Millis

A bipartisan group of House lawmakers has deemed President Donald Trump’s sanctions on Turkey insufficient, signaling that they are ready to move ahead with their own sanctions bill to punish Turkey for its offensive against the Syrian Kurdish People’s Protection Units.

But any move to levy additional sanctions on Turkey could run afoul of skeptical Republicans — and one key Democrat — in the Senate.

House Speaker Nancy Pelosi, D-Calif., confirmed to Al-Monitor at a press conference this week that she is coordinating on Turkey sanctions legislation with Sen. Lindsey Graham, R-S.C., a Trump ally who has nonetheless feuded with the president over his decision to withdraw US troops from northern Syria.

“The president gave a greenlight to Turkey to go in and commit this humanitarian disaster for the Kurds, making us an untrustworthy ally, and then had a wet noodle for the sanctions that just were not up to the task,” Pelosi told Al-Monitor at a press conference.

“We appreciate the administration’s planned action against Turkey, but it does not go far enough to punish Turkey for its egregious offenses in Syria,” said Kaylin Minton, McCaul’s communications director. “We will continue pushing for the full range of sanctions and other economic consequences imposed in our legislation. We are optimistic our bill will move forward on the House floor soon.”

And just today, Rep. Liz Cheney, R-Wyo., introduced a separate sanctions package that remains a strictly partisan endeavor with the support of more than 70 Republicans. Although House Minority Leader Kevin McCarthy, R-Calif., Minority Whip Steve Scalise, R-La., and Rep. Mac Thornberry, R-Texas, the top Republican on the Armed Services Committee, have all signed onto the Cheney bill, McCaul has not.

Meanwhile, Graham and Chris Van Hollen, D-Md., are still pushing ahead with their own sanctions package in the upper chamber. While they will not unveil their bill until Thursday, they have indicated that they intend to stick by the framework they proposed last week.

“There’s a lot of support for it,” Graham told Al-Monitor. “I don’t think most people agree with President Trump that Turkey’s invasion of Syria is of no consequence.”

All three bills would sanction anyone supporting Turkey’s defense sector and parts of its energy industry, while banning US arms sales to Ankara. The Graham and Cheney bills would directly sanction President Recep Tayyip Erdogan and six other top Turkish officials, while the sanctions proposed by McCaul and Engel would not.

McCaul, who has not signed onto the Cheney bill, also partnered with Engel to introduce a nonbinding resolution condemning Turkey’s Syria offensive, which the House passed 354-60 today. If the bill were to pass the Senate, it would land on Trump’s desk, setting the stage for a possible veto override.

But Senate Majority Leader Mitch McConnell, R-Ky., has so far refused to commit to holding a floor vote on either a resolution or a Turkey sanctions bill. McConnell simply told Al-Monitor that “we’re discussing that whole Syria matter.”

Like McConnell, Risch and Inhofe have refused to weigh in on whether Congress should go further than Trump with additional sanctions on Turkey, pointing to the president’s sanctions that are already in place.

Graham said that Trump issued the sanctions on Monday after a call with Erdogan. After sanctioning Turkey’s defense and energy ministries, Trump tweeted that “additional legislation may be sought.” Still, Graham has continued attacking the president for withdrawing from northern Syria, accusing him of “making the same mistakes as President [Barack] Obama made in Iraq.”

“The steel tariff is laughable,” said Eissenstat. “Turkey doesn’t sell very much steel to us at all. The penalties on the ministries of defense, interior and energy don’t preclude any intergovernmental relations and, in any case, wouldn’t be activated for 30 days.”

Furthermore, Trump has refused to implement legally mandated sanctions on Turkey for its purchase of the S-400 Russian missile defense system. All three sanctions bills clarify that the Trump administration must implement the sanctions for the purchase.

The McCaul bill also calls for the Trump administration to sanction Turkey’s state-run Halkbank for an Iran sanctions evasion scheme dating back to the Obama administration.

But Congress may not even have to act on the Halkbank sanctions. The Justice Department indicted Halkbank for allegedly laundering money to Iran on Tuesday despite Ankara’s multiyear lobbying effort to avoid the indictment and sanctions. Eissenstat estimates that the Halkbank sanctions could exceed $2 billion but argued that “there’s something political about the decision to begin prosecution now.”

As the sanctions threats against Turkey mount, the top Democrat on the Senate’s Middle East panel is arguing in favor of more targeted legislation. Sen. Chris Murphy, D-Conn., who derided Trump’s Turkey sanctions as “farcical” last week, lobbied his colleagues against the Graham bill in between Senate votes on Monday.

“If we’re going to talk about sanctions, let’s make sure they’re targeted to the behaviors that we want Turkey to engage in or not engage in,” said Murphy. “Let’s have a real conversation about how to build a sanctions regime instead of just doing it because we’re angry at Trump.”

Sen. Mitt Romney, R-Utah, the chairman of the Senate Middle East panel, parted with Murphy, telling Al-Monitor that he is open to sanctions while lambasting Trump for the Turkish incursion.

“It’s appropriate to apply sanctions when you see a nation wipe out our friends,” Romney told Al-Monitor. “But recognize that the reason for what the Kurds are doing is because of the decision by the administration to open the door for what’s occurring.”

But even lawmakers who support harsh sanctions on the NATO ally are not convinced that sanctions will effectively deter Turkey from pulling out of northeast Syria.

“I think they will not change Turkey’s behavior, but I think there needs to be some accountability for what Turkey’s doing,” Sen. Jeanne Shaheen, D-N.H., told Al-Monitor.