The vote to end US support for the Saudi coalition in Yemen deals another blow to Riyadh, but it’s also an effort by liberals to curtail the president’s war-making authority. 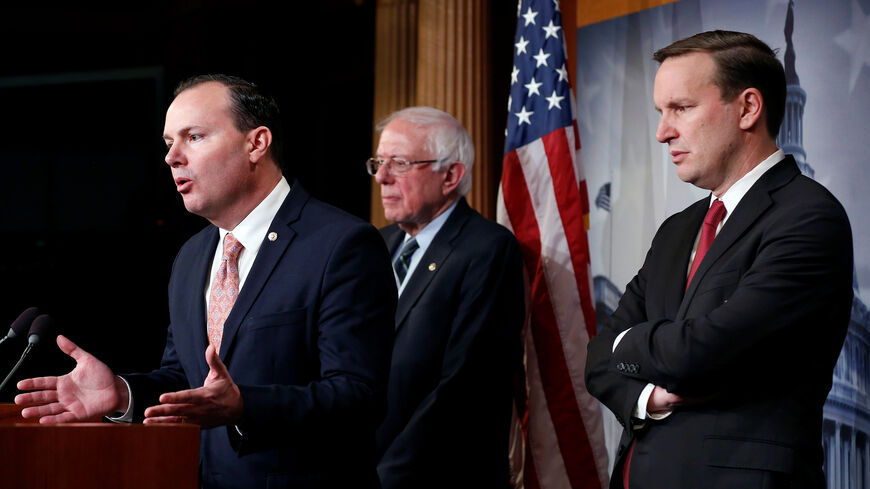 Sens. Mike Lee, R-Utah, Bernie Sanders, I-Vt., and Chris Murphy, D-Conn., speak after the Senate voted on a resolution ending US military support for the war in Yemen on Capitol Hill in Washington, Dec. 13, 2018. - REUTERS/Joshua Roberts

The Senate voted 54-46 today to end US support for the Saudi-led coalition fighting Yemen’s Iran-backed Houthi rebels, the third time Congress has done so since December.

The resolution is but the latest bipartisan rebuke of Saudi Arabia over the humanitarian crisis in Yemen and the murder of journalist Jamal Khashoggi.

It now goes to the Democratic-controlled House, where its expected passage would mark the first time Congress has successfully used the 1973 War Powers Act to try to curtail a foreign military intervention. Liberal Democrats hope to set an expansive precedent that would maximize Congress’ power to curtail US military activity abroad.

“We have the opportunity to cast the historical vote which will end the most horrific war on the planet right now, where 85,000 kids have already starved to death, and stop following the lead of a despotic, murderous regime in Saudi Arabia,” Sen. Bernie Sanders, I-Vt., the resolution’s author, told reporters before the vote. “Lastly and not leastly important, the United States Congress is going to reassert its constitutional responsibility over issues of war that has been abdicated to presidents — Democrats and Republicans — for too many years.”

Sanders, a candidate for the 2020 presidential election, teamed up with House counterparts in the Congressional Progressive Caucus to introduce the legislation in 2017.

The caucus initially emphasized that the resolution would end US midair refueling for Saudi coalition warplanes, which the Donald Trump administration ended last year shortly after Khashoggi’s murder. But lawmakers insist the resolution would also require Trump to end intelligence sharing and targeting support for the Saudis by defining those activities as “hostilities” under the War Powers Act.

They argue that US logistical support for the Saudis makes Washington a belligerent party in the conflict. The Saudi coalition has come under intense scrutiny for bombing civilian targets, including schools and funerals. The Trump administration declined to certify last month that the Saudis were undertaking efforts to reduce civilian casualties despite a congressional mandate do so as a condition for resuming US assistance.

But when the House passed the resolution last month, an amendment offered by Rep. Ken Buck, R-Colo., exempted intelligence sharing from the bill. That amendment ultimately passed 252-177 with the support of 57 Democrats despite the Congressional Progressive Caucus’ efforts to whip votes against the amendment. The Senate unanimously agreed to retain similar language today by voice vote with an amendment from Sen. Marco Rubio, R-Fla., hoping that it would help ease rapid passage in the House.

“Frankly if it had come up to a vote I probably would have voted against it,” Sanders told Al-Monitor at a press conference after the vote. “But I think the language of the Rubio amendment is in fact something that the president already has the authority to use, so we didn’t think it was a big deal.”

Republican leaders argue that the resolution is too broad and sets a precedent allowing any lawmaker to force a vote to end military cooperation arrangements and US security assistance to any country.

“We should think twice about undermining those very partners whose cooperation we need for our own security,” Majority Leader Mitch McConnell, R-Ky., said on the Senate floor ahead of the vote. “We should not use this specific vote on a specific policy decision as some proxy for all the Senate’s broad feelings about foreign affairs. Concerns about Saudi human rights issues should be addressed with the administration and with Saudi officials.”

The White House has threatened to veto the bill, arguing that US support for the Saudi coalition does not amount to “hostilities.” Although Congress doesn’t have a veto-proof majority, Sanders capitalized on the anti-Saudi sentiment sweeping Capitol Hill to secure seven Republican votes for his resolution.

“Remember, we’re only getting a couple of Republicans and they’re voting with us as a matter of conscience,” said Sen. Chris Murphy, D-Conn., who co-sponsored the Sanders bill along with Sen. Mike Lee, R-Utah.

“As a legal matter, I do not believe that American military forces are engaged in hostilities in Yemen,” House Majority Leader Steny Hoyer, D-Md., said in a statement upon announcing support for the resolution last year.