Faced with opposition from the White House and Senate Republican leadership, Congress is struggling to pass Saudi sanctions legislation. 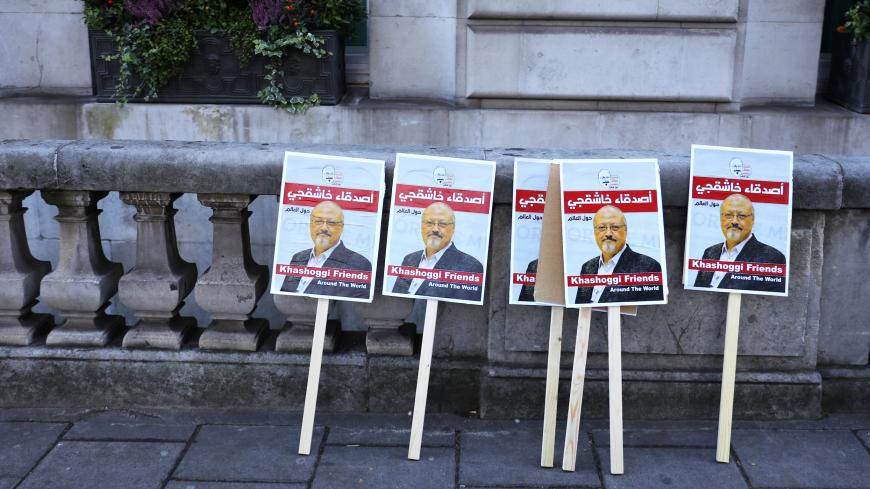 Placards are seen outside the Saudi Arabian Embassy in London on Oct. 26, 2018, as people protest against the killing of journalist Jamal Khashoggi in Turkey. - REUTERS/Simon Dawson

The Senate Foreign Relations Committee voted 13-9 today to advance legislation intended to sanction Crown Prince Mohammed bin Salman and other Saudi officials complicit in last year’s assassination of journalist Jamal Khashoggi. And although Democrats gained enough Republican support to advance the bill, it may be a pyrrhic victory.

President Donald Trump has resisted bipartisan calls to punish Prince Mohammed for his alleged role in Khashoggi’s murder, going so far as to avoid implementing a legally mandated probe into the crown prince’s role in the assassination. And Senate Majority Leader Mitch McConnell, R-Ky., is unlikely to allow a floor vote on legislation that the president would ultimately veto.

Young, a co-sponsor on the Menendez bill, told Al-Monitor that it “sends a stronger message to Saudi leadership that the United States is unhappy with our security partner’s actions on a number of fronts, whether it’s violations of international human rights law, the murder of Jamal Khashoggi and more generally how they’ve carried out the military operation in Yemen.”

While Risch’s rival bill would have sanctioned numerous Saudi royals serving in senior government positions, the bill would have allowed Trump to waive them and would not have extended to Prince Mohammed himself. Furthermore, the sanctions in the Risch bill merely banned the Saudi royals from entering the United States. The Menendez sanctions that the committee ultimately chose to advance go further, cutting the crown prince and other Saudi officials off from the US financial system in addition to the visa bans.

Concerns that the Risch legislation did not go far enough prompted Graham and Paul to join Democrats in tanking the bill 12-10 by amending it with Menendez’s language, leading the chairman to withdraw his legislation.

“While I appreciate that the chairman’s bill recognizes that there’s some reckless behavior, at the end of the day the crown prince can walk away and say to himself, you know what, all I got was at very best a slap on the wrist,” said Menendez. “The bill largely gives the president permission to do all the things he can already do.”

Kate Kizer, the policy director for Win Without War, a coalition of peace activist groups, told Al-Monitor that the Menendez legislation is unlikely to pass “as a standalone bill.”

However, she noted that lawmakers could attach the Saudi sanctions provisions as amendments to the annual defense authorization bill. House Democrats took a similar approach by attaching a series of provisions to the defense bill earlier this month, setting the stage for a showdown with the Republican-held Senate. The provisions include efforts to end US involvement in the Yemen war and a separate Saudi sanctions bill that the House also passed as a standalone measure 405-7.

Notably, today’s Saudi sanctions vote occurred immediately after Trump vetoed three separate resolutions Wednesday that would have banned the transfer of $8.1 billion in arms transfers to Saudi Arabia, the United Arab Emirates and Jordan. The Senate is expected to vote on overriding Trump’s veto within the next week — but it’s unlikely Menendez has the two-thirds majority needed to overrule the president. The bill the Senate advanced today would also ban offensive arms sales for Saudi Arabia.

“Chairman Risch has consulted with the White House, National Security Council, State Department and others to address their concerns,” the senator’s spokeswoman, Suzanne Wrasse, told Al-Monitor. “He has confidence that the White House would look at it favorably but not if it gets loaded down with amendments that they have stated they would never sign into law, which of course are sanctions on Mohammed bin Salman and arms sales.”

“It got a very strong vote in the House,” Coons told Al-Monitor, arguing that Congress could force Trump’s hand by passing a bill with a veto-proof majority.

That bill, introduced by Rep. Tom Malinowski, D-N.J., would require the Trump administration to place visa bans on every “foreign person” complicit in the Khashoggi murder — including the crown prince. And while the sanctions in the Menendez bill go further, House Democrats succeeded in gaining enough Republican support by limiting the sanctions to visa bans.

“That’s not necessarily a big stick to be wielding for the international assassination of a well-known journalist,” Kizer told Al-Monitor.

Still, at least one Republican senator who voted against the Menendez bill today has signaled he’s on board with sanctioning the crown prince.

Sen. Mitt Romney, R-Utah, told Al-Monitor last week that he was open to sanctions on Prince Mohammed depending on “what the sanctions look like.”

“There is a strong enticement on the part of many members of the committee, myself included, that there need to be sanctions for the brutal murder of Mr. Khashoggi,” said Romney.

“I think you want to be careful when you say it’s got a veto-proof majority,” Risch told Al-Monitor. “I think a vote after a veto would be entirely different than a vote on adoption.”

Despite all the legislative squabbling, one thing remains clear: Saudi Arabia has few, if any, friends left on Capitol Hill.

“If the Saudis don’t change their conduct, the relationship is going to be irreparably damaged,” said Risch. “They’re only one Khashoggi-type event away from totally severing their relationship and then having to find a new partner.”