US allies, Democrats express concerns after assassination of Iran’s Soleimani

US Secretary of State Mike Pompeo has called for de-escalation after the killing of Iran's Quds Force leader Qasem Soleimani, but international allies and Democratic senators are openly skeptical about Pompeo’s claim that his assassination was wise. 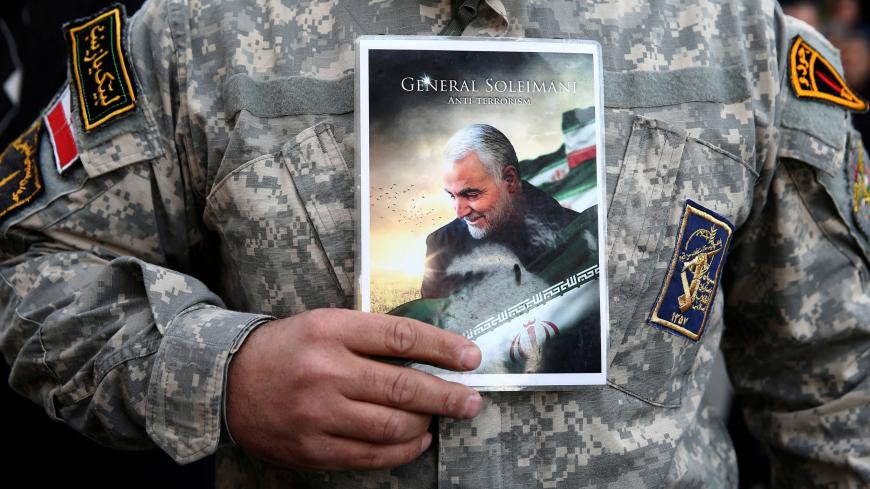 A demonstrator holds a picture of Qasem Soleimani during a protest against the assassination of the Iranian general in an airstrike at the Baghdad airport, in Tehran, Iran, Jan. 3, 2020. - WANA (West Asia News Agency)/Nazanin Tabatabaee via REUTERS

WASHINGTON — Hours after the United States military said it had killed Iranian general Qasem Soleimani at the Baghdad airport in order to deter future Iranian attacks on US troops, Secretary of State Mike Pompeo rushed to television morning news shows today and placed calls to international counterparts calling for de-escalation and claiming the killing of Soleimani will make the world more safe. But several international allies and even more hawkish Democratic senators expressed open skepticism about Pompeo’s claim that the assassination was justified to avert an imminent threat, and concern that the US killing of the top Islamic Revolutionary Guard Corps Quds Force leader could unleash an escalation that could get more Americans and allied forces killed.

“There is no imminent threat aside from that which the president has provoked,” Sen. Ben Cardin (D-Maryland), one of only two Democratic senators who voted in 2015 against President Barack Obama’s Iran nuclear deal, said today.

In a further sign of dismay, even the statements from the United States’ closest allies working with it especially in the fight against the so-called Islamic State in Iraq and Syria, were unusually terse and tight lipped.

“We have always recognized the aggressive threat posed by the Iranian Quds force led by Qasem Soleimani,” British Foreign Secretary Dominic Raab said in a statement after a call with Pompeo. “Following his death, we urge all parties to de-escalate. Further conflict is in none of our interests.”

“We have woken up to a more dangerous world,” France’s Europe Minister Amelie de Montchalin told RTL radio, saying President Emmanuel Macron would consult soon with “players in the region.”

In a call today, Russian President Vladimir Putin and French President Emmanuel Macron “expressed concern in connection with the death. It was stated that this act could seriously exacerbate situation in the region,” Russia’s RIA Novosti reported.

Pompeo dismissed the European concerns that the killing could unleash further reprisals, insisting that Soleimani posed a threat but declining to give details.

“I can’t talk too much about the nature of the threat” that caused the United States to strike, but the decision “saved American lives,” Pompeo told CNN’s New Day, adding that the attack threat had been “imminent.”

The Swiss Foreign Ministry said it had conveyed messages from Iran to the United States and vice versa after Iran summoned its envoy to protest the US action. “The chargé d’affaires was informed of Iran’s position and in turn delivered the message of the United States,” the Swiss Foreign Ministry told Reuters. Switzerland represents US interests in Iran since the two nations do not have formal diplomatic relations.

Iran, predictably, threatened reprisals, as tens of thousands of Iranians took to the streets to mourn the Quds Force chief, who was a popular figure in Iran. Iranian Supreme Leader Ayatollah Ali Khamenei, unusually, attended an emergency National Security Council cabinet meeting Friday, summoned to determine how to respond to the US action.

“The great nation of Iran will take revenge for this heinous crime,” Iranian President Hassan Rouhani warned in a tweet.

Iranian Foreign Minister Mohammad Javad Zarif denounced the US strike as an “extremely dangerous and foolish action,” and warned that the “US bears responsibility for all consequences of its rogue adventurism.”

It was not clear if he would proceed with a previously planned trip to the United Nations headquarters in New York next week.

President Donald Trump, who has been vacationing at his Palm Beach resort of Mar-a-Lago over the Christmas and New Year holidays, tweeted photos of the American flag, and on Friday, a slogan: “Iranians never won a war, but never lost a negotiation!”

But the White House offered no briefings or backgrounders to reporters traveling with Trump in Florida, referring to the Pentagon for comment. The Pentagon issued a statement Thursday night saying the military had conducted the strike at the direction of Trump and that it was “aimed at deterring future Iranian attack plans. The United States will continue to take all necessary action to protect our people and our interests wherever they are around the world.”

Despite US calls for de-escalation, Iran experts said avoiding a wider escalation would be difficult.

“The door to diplomacy between Tehran and Washington is closed for the foreseeable future,” Ali Vaez, director of Iran programs at the International Crisis Group, told Al-Monitor from Oman. “Saving the nuclear deal might no longer be possible,” he said, adding, “The Iranians will take revenge in ways that might make it impossible for both countries to avoid direct conflict.”

“The US did this strategic mistake,” former Iranian diplomat Hossein Mousavian, currently in Iran, told Al-Monitor.

“It is likely that Iran will retaliate against US personnel in Iraq and perhaps elsewhere in the region via proxies, terrorism and sabotage,” Kahl told Al-Monitor. “We should expect more demonstrations and attempts to storm the US Embassy in Iraq (and perhaps elsewhere, like Lebanon). And pressure will build to evacuate the Baghdad embassy. We should expect more Iranian provocations in the Gulf. US forces across the Middle East will be on alert and a hair trigger. [Defense Secretary Mark] Esper has already warned of the US willingness to take preemptive action, and there may be more to come. The region will be on a knife’s edge.”

Several Democratic members of Congress expressed outrage and concern that the Trump administration was taking reckless action that could lead to a new war in the Middle East without any congressional consultation or authorization.

“[Soleimani] was a despicable killer, but this drastic escalation of hostilities — waging a military attack on Iraqi soil over the objections of that country and without congressional authorization — will increase the threat to American troops, diplomats and families in the region,” Sen. Tim Kaine (D-Virginia), a member of the Senate Foreign Relations Committee warned in a statement today that further criticized Trump’s decision to quit the nuclear deal and “resume escalating aggressions with Iran that has brought us to the brink of another war in the Middle East.”

“Trump's ‘maximum pressure’ campaign has made the region less stable, divided us from key allies and is driving our adversaries together,” Kaine continued. “Congress must act to stop President Trump from entangling America in yet another unnecessary war in the Middle East.”

Trump ally Sen. Lindsey Graham (R-South Carolina), one of the only members of Congress who was briefed on the US action in advance when he was visiting Mar-a-Lago, cheered the action.

“We killed the most powerful man in Tehran short of the Ayatollah,” Graham tweeted today. “This was not an act of revenge for what he had done in the past. This was a preemptive, defensive strike planned to take out the organizer of attacks yet to come.”