As allies express cautious approval of the US airstrike in Syria, the United States says its targeted action does not signal a broader shift to military regime change. 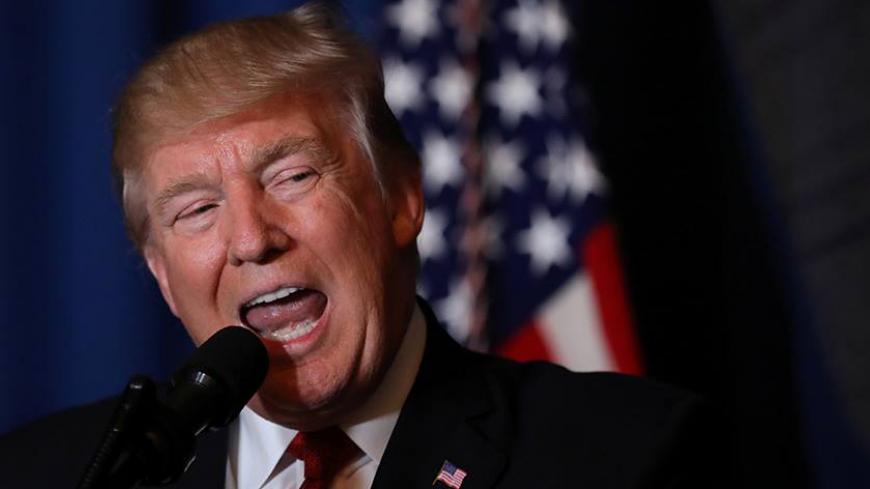 US President Donald Trump delivers a statement about missile strikes on a Syrian airfield at his Mar-a-Lago estate in West Palm Beach, Florida, April 6, 2017. - REUTERS/Carlos Barria

WASHINGTON — US President Donald Trump, less than 100 days in office, caught the world off guard when he ordered the military to fire 59 Tomahawk cruise missiles in a targeted military strike on a Syrian air base April 6, in retaliation for a suspected chemical weapons attack on civilians in rebel-held Idlib province two days before.

“Years of previous attempts at changing [President Bashar al-] Assad's behavior have all failed, and failed very dramatically,” Trump said April 6 at a news conference in Mar-a-Lago, Florida, announcing that he had ordered what he called a targeted military strike. “As a result, the refugee crisis continues to deepen and the region continues to destabilize, threatening the United States and its allies.”

Administration officials said the strikes showed Trump was willing to take decisive action, but they were limited to retaliation for using chemical weapons and did not signal a broader shift in US policy toward military intervention to overthrow the Assad regime.

“This clearly indicates the president is willing to take decisive action when called for,” Secretary of State Rex Tillerson told journalists traveling with Trump for his summit with Chinese President Xi Jinping April 6. “The use of prohibited chemical weapons, which violates a number of international norms and violates existing agreements, called for this type of … kinetic military response.”

“I would not in any way attempt to extrapolate that to a change in our policy or our posture relative to our military activities in Syria today,” Tillerson said. “There’s been no change in that status. But I think it does demonstrate that President Trump is willing to act when governments and actors cross the line … in the most heinous of ways.”

The Pentagon and National Security Council said Shayrat airfield, the targeted facility, was used to store chemical weapons and is believed to be the base from which Syrian air force planes had taken off to conduct the April 4 chemical weapons attack on Khan Sheikhoun that killed more than 80 people, many of them children.

“It was aimed at this particular airfield for a reason, because we could trace this murderous attack back to that facility,” national security adviser Gen. H. R. McMaster told journalists at a press conference with Tillerson in Florida April 6.

“I think what it does communicate is a big shift … in Assad’s calculus … because this is … the first time that the United States has taken direct military action against that regime or the regime of his father,” McMaster said.

“The U.S. intelligence community assesses that aircraft from Shayrat conducted the chemical weapons attack on April 4,” Pentagon spokesman Capt. Jeff Davis said in a statement to the press April 7. “The strike was intended to deter the regime from using chemical weapons again.”

Russia, acknowledging that the Pentagon had indeed informed it in advance of the planned military action to avoid Russian casualties, nevertheless criticized the US action on Friday as breaching Syria’s sovereignty.

Russian President Vladimir Putin “considers the US strikes against Syria an act of aggression against a sovereign country violating the norms of international law, and under a trumped-up pretext at that,” Kremlin spokesman Dmitry Peskov told journalists April 7. “Washington’s move substantially impairs Russian-US relations, which are in a deplorable state as it is.”

It is not clear, however, if the griping was largely face-saving posturing. Russia said Friday that it had suspended deconfliction channels with Washington, set up to avoid air collisions over Syria, as a result of the US action, but the Pentagon said it continued to use the channel Friday. Tillerson, due to travel to Moscow April 11-12, had called his Russian counterpart, Foreign Minister Sergey Lavrov, April 6 to discuss the situation, the State Department said.

Tillerson said that Russia had not lived up to its 2013 agreement to ensure that the Syrian regime’s chemical weapons arsenal was fully destroyed.

Iran also condemned the US cruise missile strikes against its Syrian ally, while the Syrian regime blasted the US action as “unjust and arrogant aggression.”

“In words and actions, President Trump sent a strong and clear response: The use of chemical weapons is unacceptable,” said Israeli Prime Minister Benjamin Netanyahu April 7. “Israel fully and unequivocally supports the president’s decision and hopes the clear message will reverberate not only in Damascus but also in Tehran, Pyongyang and other places.”

“US strikes show needed resolve against barbaric chemical attacks,” European Council President Donald Tusk tweeted April 7. He said the European Union “will work with the US to end brutality in Syria.”

The US action was “limited and appropriate,” said British Defense Secretary Michael Fallon. “We fully support this strike,” Fallon told the BBC April 7. “We have been in close contact with the US over the last couple of days and they believe they have exhausted all possible diplomatic and peaceful ways of dealing with the regime's use of chemical weapons. They want to try to prevent future chemical attacks.”

Even as the United States deliberately targeted Assad assets for the first time in the six-year conflict, Tillerson said the US military priority in Syria is still to fight the Islamic State, and he anticipates continuing to work through the Geneva process to try to reach a broader political resolution of the civil war.

“Overall, the situation in Syria is one where our approach today and our policy today is first to defeat [IS],” Tillerson said. “There is a large coalition of international players and allies who are involved in the future resolution in Syria.”

The United States is focused on planning to defeat IS and “begin to stabilize areas of Syria … through cease-fire agreements between the Syrian regime forces and opposition forces … [and] begin to restore some normalcy to them,” he said.

“In the midst of that, through the Geneva process, we will start a political process to resolve Syria’s future in terms of its governance structure,” Tillerson said. “And that ultimately, in our view, will lead to a resolution of Bashar al-Assad’s departure.”

The narrow purpose of the retaliatory strikes against Assad’s use of chemical weapons was reflected in congressional notification. Several members said they were informed by the administration of the impending action only just before or after the strikes were underway, reflecting their understanding, they said, that this was not the start of a major war without their authorization.

Congress largely applauded the strikes as a “proportional response” to the suspected chemical attack but demanded to be included going forward. The full Senate is scheduled to receive a briefing before leaving for its two-day Easter break on April 7, said Senate Majority Leader Mitch McConnell, R-Ky.

In an April 7 letter to House Speaker Paul Ryan, R-Wis., House Minority Leader Nancy Pelosi, D-Calif., demanded that the lower chamber immediately be called back into session to debate a war authorization.

“The President’s action and any response demands that we immediately do our duty,” Pelosi wrote. “Congress must live up to its constitutional responsibility to debate an Authorization of the Use of Military Force against a sovereign nation.”

Just hours earlier, Pelosi had released a statement saying the strike “appears to be a proportional response to the regime’s use of chemical weapons.”

Senate Minority Leader Chuck Schumer, D-N.Y., likewise issued a statement, saying, “Making sure Assad knows that when he commits such despicable atrocities he will pay a price is the right thing to do.” He added, “It is incumbent on the Trump administration to come up with a strategy and consult with Congress before implementing it.”

The chairman and ranking member of the Senate Foreign Relations Committee, Bob Corker, R-Tenn., and Ben Cardin, D-Md., also applauded the strikes but demanded to weigh in if a longer-term or larger operation is under consideration. “As we move forward, it will be important for the administration to engage with Congress and clearly communicate its full strategy to the American people,” Corker said in a statement.

Sen. Tim Kaine, D-Va., Hillary Clinton’s vice presidential running mate in the 2016 election and the top Democrat on the Senate Foreign Relations panel on the Near East, was one of the lone voices to decry the decision to act without Congress.

“I voted for military action against Syria in 2013 when Donald Trump was advocating that America turn its back on Assad's atrocities,” Kaine said in a statement. “Congress will work with the President, but his failure to seek Congressional approval is unlawful.”

A few others by contrast called for an immediate ramp-up.

“Building on tonight’s credible first step, we must finally learn the lessons of history and ensure that tactical success leads to strategic progress,” Senate Armed Services Chairman John McCain, R-Ariz., said in a joint statement with Sen. Lindsey Graham, R-S.C. “That means following through with a new, comprehensive strategy in coordination with our allies and partners to end the conflict in Syria. The first measure in such a strategy must be to take Assad’s air force — which is responsible not just for the latest chemical weapons attack, but countless atrocities against the Syrian people — completely out of the fight. We must also bolster support for the vetted Syrian opposition and establish safe zones to address the ongoing humanitarian crisis.”