Tillerson: Russia has 'best means' to convince Assad to go

On his first trip to Russia as secretary of state, Rex Tillerson met with Russian President Vladimir Putin and Foreign Minister Sergey Lavrov in Moscow to discuss steps to try to reverse the decline in relations between the United States and Russia. 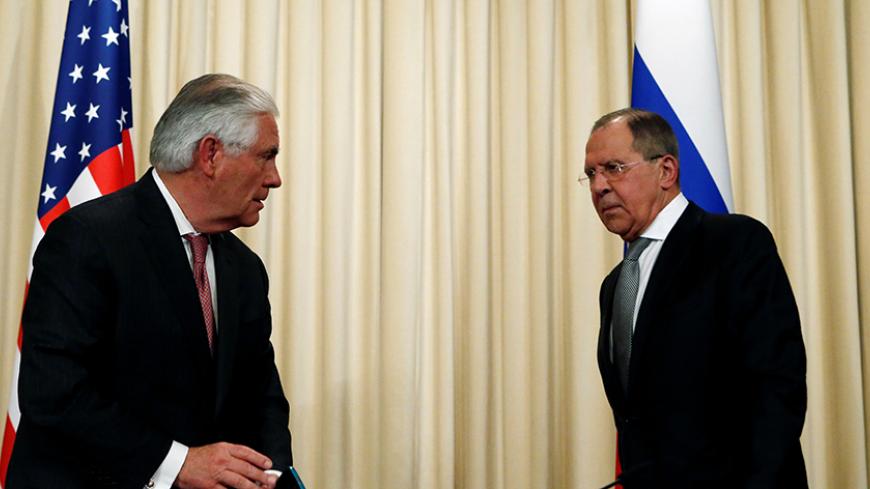 Russian Foreign Minister Sergey Lavrov and US Secretary of State Rex Tillerson stand up to leave after a news conference following their talks in Moscow, April 12, 2017. - REUTERS/Sergei Karpukhin

WASHINGTON — On his first trip to Russia as secretary of state, Rex Tillerson came out of two hours of meetings with Russian President Vladimir Putin on April 12 saying the United States and Russia needed to take steps to halt the sharp degradation of relations between the world’s foremost nuclear powers.

But while Tillerson said he and his Russian interlocutors were looking to build on areas of common ground, their sharp differences, including over the role of President Bashar al-Assad in Syria and his culpability in the April 4 chemical weapons attack in Idlib province, seemed to overwhelm any agreement on a process for advancing a political solution to end the Syrian civil war.

“Clearly, our view is that the reign of the Assad family is coming to an end,” Tillerson said at a news conference with Russian Foreign Minister Sergey Lavrov after several hours of meetings April 12. “They have again brought this on themselves with their conduct of the war of these past few years. “

“We discussed our view that Russia, as their closest ally in the conflict, perhaps has the best means of helping Assad recognize this reality,” Tillerson said.

“We do think it’s important that Assad’s departure is done in an orderly way … so that certain interests and constituencies that he represents feel they have been represented at the negotiating table for a political solution,” the former Texas oil executive said. “How that occurs, we leave that to the process going forward. We do not think one has to occur before the other can begin, and it will take a pace of its own.”

“But the final outcome … does not provide for a role for Assad or for the Assad family in the future governance of Syria,” Tillerson said. “We do not think the world will accept that.”

Tillerson was also quite clear that the United States has high confidence in the assessment that drove President Donald Trump to order 59 cruise missile strikes on Syria’s Shayrat air base last week, in response to the April 4 suspected nerve gas attack on Idlib province.

“The perspective from the United States, supported by the facts that we have, are conclusive that the recent chemical weapons attack carried out in Syria was planned and it was directed and executed by Syrian regime forces, and we’re quite confident of that,” Tillerson said.

“This is just the latest in a series of the use of chemical weapons by the Assad regime,” he said. “So I think the characterization is one that President Assad has brought upon himself.”

Lavrov interjected, saying Russia was insisting on an independent investigation of what happened April 4. But shortly after the Moscow news conference where he did so, Russia’s envoy to the UN cast a veto on a resolution calling for access for investigators from the UN chemical weapons watchdog body, the Organization for the Prohibition of Chemical Weapons, casting doubt on how interested Russia really was in an independent probe.

“It is perfectly obvious that … this subject is one we diverge on, inasmuch as Russia is insisting on an objective investigation,” Lavrov said. “The media hysteria which was unleashed as a result of this incident — we have to make sure that we are impartial now in investigating this whole business by sending international expert groups to the site.”

Beyond Syria, Tillerson said he and Lavrov had discussed North Korea, Ukraine, cyber issues, and agreed on steps to try to increase senior-level diplomatic contacts to try to improve relations that had sharply deteriorated after Russia’s invasion of Crimea in 2014.

“The current state of US-Russia relations is at a low point,” Tillerson said. “The world’s two foremost nuclear powers cannot have this kind of relationship.”

“We agreed there needs to be more senior-level communication between our countries, both diplomatic and military,” Tillerson said. “We need to put an end to that degradation.”

Lavrov said Russia was eager to work with the United States on combating cybercrimes, and said Russia had been shown no evidence proving any Russian interference in the US election, now being investigated by the FBI and congressional committees.

“We, too, are very interested in our citizens not being victims of cybercrimes, and we proposed that we should have a special system of contacts, a special mechanism which would exchange information in real time, looking into how people are trying to subvert international norms and national norms in both countries,” Lavrov said.

Russia is “engaged in a very sophisticated propaganda and disinformation campaign to allow the Assad campaign to escape responsibility for these heinous acts,” but it now has a “tremendous opportunity” to play a constructive role, a senior US administration official, speaking not for attribution, told journalists April 12. “We owe it to humanity, we owe it to the Syrian people to do everything we can to allow Russia to play a productive role.”