What did Tillerson’s Russia trip achieve?

US Secretary of State Rex Tillerson and Russian President Vladimir Putin didn’t reach any groundbreaking pacts during Tillerson's visit to Moscow, but they agreed to keep trying. 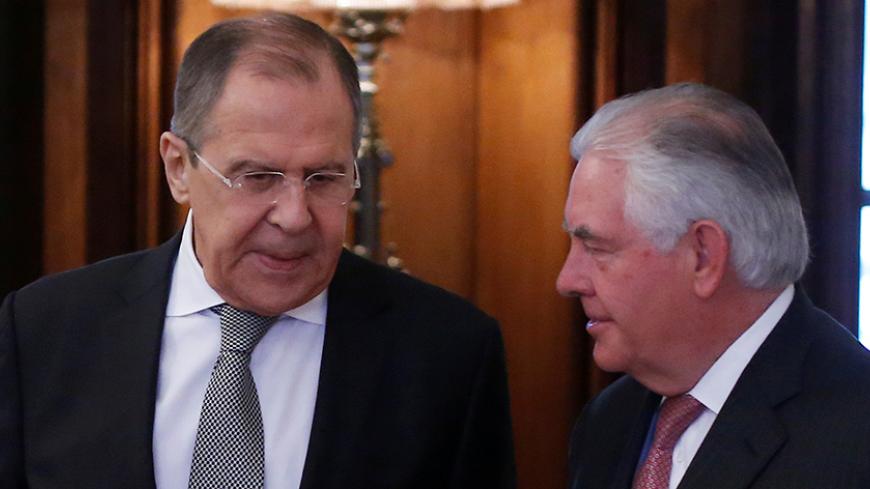 April 12 was an intense day in Moscow for US Secretary of State Rex Tillerson. After a three-hour talk with Russian Foreign Minister Sergey Lavrov, instead of holding a scheduled press conference, Tillerson was invited to the Kremlin to meet with Russian President Vladimir Putin.

Days before Tillerson's visit to Russia there were conflicting reports about whether the meeting with the Russian president had been removed from Tillerson’s agenda or if it had ever been on the schedule at all. Veteran observers of Russia recognized this as merely one of Putin’s usual antics to establish that he’s calling the shots. In reality, Putin has met all US secretaries of state on their first visits to Moscow.

After a two-hour conversation with Putin, Tillerson and Lavrov held an hourlong press conference. An experienced diplomat, Lavrov seemed comfortable on his home turf going through the issues discussed, praising modest achievements and expressing hope that the remaining disagreements would be tackled constructively by both sides.

Tillerson was picking his words more carefully. He lamented “the low level of trust between the two countries” and the current state of the relationship between “the two foremost nuclear powers.”

Those who expected few deliverables were correct. Essentially, there weren’t many objective reasons for the two parties to agree on many things. They predictably reiterated their positions on Syria, expressed commitment to the Minsk agreements as a framework to settle Ukraine issues and sounded united about “denuclearizing” the Korean Peninsula — each side with its own idea of how best to do it.

However, one topic discussed during the Tillerson visit was seen as more important to Moscow and Washington than other issues of bilateral and international scope. It was a conversation on how to achieve a “non-conflict existence” between the two nations. One possible mechanism mentioned — designating professionals to talk through the disagreements between Russia and the United States and brainstorm ways to mitigate them — will also determine the very principles of such an existence. This is a work in progress, but the good thing is, the parties signaled their intent to pursue such an initiative.

Another point they seemed to agree on was that current bilateral problems are exacerbated by what Lavrov called “time bombs left behind by the Obama administration.” For Tillerson, it may have been a comfortable narrative to justify why the administration was slow to deliver on President Donald Trump’s campaign pledge “to seek better relations with Moscow.” This reasoning is still accepted in Moscow, though it would have scored more points if it had been voiced a month ago. Now, after the Syria strikes, the Russians aren’t buying into the message as much.

Moscow also seized the moment of direct contact with the top US diplomat to clarify its own positions. On Syria, the departure of President Bashar al-Assad was and remains a non-starter for Russia. What neither Lavrov nor Putin would probably say to Tillerson, but do expect him to understand, is that Russia has invested so much into Syria now, politically and militarily, that Moscow’s primary concern is less about Assad than about the principle, power and prestige of maintaining its position. Hence, any plan that might move Moscow from this standing would have to involve some face-saving mechanism that the Kremlin could package as a win-win internationally, and as a “decision made in Russia’s best interest” domestically.

So far, the US vision has been to get Russia on board by offering Moscow an opportunity to “play a constructive role in the humanitarian and political catastrophe in the Middle East.” That approach misses a critical point in Russian political psychology: The Kremlin believes it has already stepped up as a constructive player to counter the increasingly destructive forces unleashed by the United States. This belief — no matter how uncomfortably it sits with anyone — is not entirely groundless. Many players in the region perceive Russia in this capacity, even if it’s just for their own political reasons.

A senior Russian diplomat speaking with Al-Monitor not for attribution said: “[Russia] stepping aside from Assad would mean, among other things, an ultimate win for the US regime-change policy. It would indicate that no matter how long you resist this policy, you’ll be made to surrender. That’s a serious red line in Russia’s foreign policy thinking, the one that President Putin cannot afford to be crossed — not for all the tea in China, or should I say, a chocolate cake in Mar-a-Lago?”

Therefore, Tillerson’s statement on the importance of Assad’s departure in a “structural, organized manner” is seen in Moscow as a positive outcome. It leaves open the prospect of returning to the political process that was underway for several months before the gas attack and the airstrikes.

However, it might be much more difficult to achieve now, as the parties focus on reinforcing their respective and contradictory narratives. Reports of US intelligence intercepting communications between Syrian military and chemical experts about preparations for a sarin nerve gas attack in Idlib are a powerful argument for the audience that shares the “American narrative” — as Moscow sees it. However, it is producing counternarratives on the Russian side. One such narrative, according to the Russian Defense Ministry, suggests that of all “12 facilities that stored Syrian chemical weapons, 10 were destroyed in the timeline between 2013 and 2016 under the watch of the Organization for the Prohibition of Chemical Weapons … [while] the remaining two compounds are out of reach for the Syrian government since they are located in the territory controlled by the so-called opposition.”

Also, as Putin’s press secretary, Dmitry Peskov, put it: “The recitation of mantras on the necessity of Assad’s departure” won’t budge Moscow’s position an inch, nor will it help with a political solution to the Syria crisis. On the contrary, it will only reinforce Russia’s position on Assad. So far, Moscow has been operating on the principle of presumed innocence and calling for an “unbiased probe” into the Syria attack. To Russia, a refusal to have such an investigation would show that the case against Assad is being pursued for political rather than humanitarian reasons.

Remarkably, a recent Mir interview with Putin indicates Moscow hasn’t reached a concrete conclusion on exactly who perpetrated the attacks. Putin’s statement that it could have been the Syrian opposition or the Islamic State (IS) is based primarily on the opposition’s hope of saving itself in a losing battle and on previous IS chemical attacks in Iraq. On factual grounds, however, Russia’s arguments look as shaky as the West’s “confidence” that Assad did it. Yet this state of affairs leaves enough space for US-Russia cooperation on investigating the case, if only inspired by a solid political will.

Though it seems counterintuitive, Russia’s veto of the UN resolution on Syria proposed by the United States, the UK and France hours after the Tillerson-Lavrov press conference is an important sign of Russia’s commitment to work with the United States. Deputy Russian UN Ambassador Vladimir Safronkov explained the veto by saying the resolution assigned guilt “before an independent and objective investigation” could be conducted.

However, Russia probably had decided to veto the resolution even before Tillerson and Lavrov met, to give itself more time to think through the negotiation results. Moscow wanted to come up with a fresh proposal at the UN that would reflect a more engaging approach for both US and Russian interests. Hence came Safronkov’s heated and scandalous lashing out against British diplomat Matthew Rycroft, whom he accused of trying to derail a potential agreement on Syria and Assad’s fate that Moscow had hoped to reach with Washington. "Don't you dare insult Russia!” he said at the UN Security Council meeting April 12.

In general, the visit left a feeling in Moscow that the initiatives Lavrov and Tillerson discussed will face intense scrutiny in Washington. The confrontational rhetoric flying from both capitals will remain prevalent. But the parties have articulated a need and agreed on some — though not many — concrete steps toward managing the situation. It’s not likely to lead to a “great-power alliance” or help both parties accomplish much together. But it might be just what’s needed to take the two back from the brink of a direct military clash and spare the world even more uncertainty. Given the current circumstances, this might be the most comfortable paradigm for the bilateral relations — at least until Putin and Trump meet face to face.