Will US and Russian relations in the new year involve cooperation, confrontation or attempts to carefully balance both? 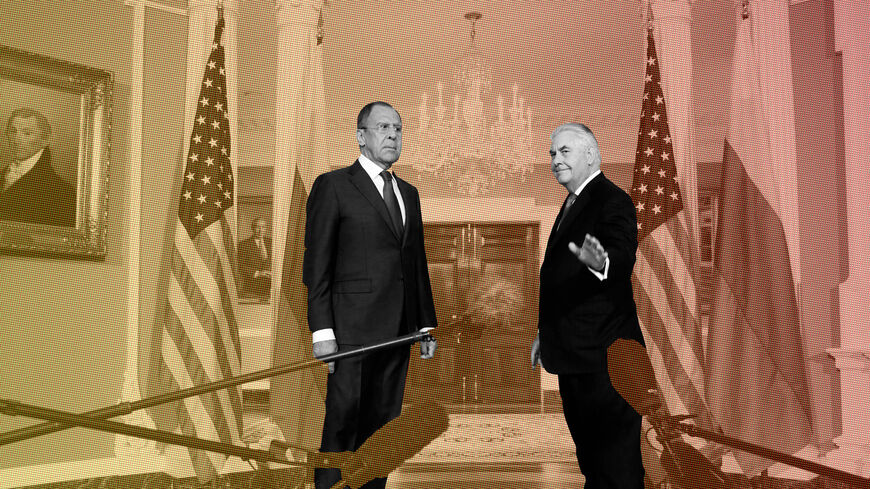 US Secretary of State Rex Tillerson (R) waves to the media next to Russian Foreign Minister Sergey Lavrov before their meeting at the State Department in Washington, May 10, 2017. - REUTERS/Yuri Gripas

MOSCOW — As 2017 was winding down, US State Secretary Rex Tillerson called Russian Foreign Minister Sergey Lavrov on Dec. 26 to discuss the future. In addition to North Korea and Ukraine, the two diplomats discussed options on moving the stalled political process on Syria and the Moscow-proposed Syrian National Dialogue Congress in Sochi.

Earlier, 40 opposition groups declared they would refuse to participate in the congress, accusing Moscow of “failing to pressure its ally, [Syrian] President Bashar al-Assad.” Russia, however, is bound to hold the congress, which is currently set for Jan. 29-30. In the meantime, Moscow continues to engage different opposition groups individually and is cautiously pushing Damascus to do more on the humanitarian side — the latest Ghouta medical evacuation may be a sign of the very modest progress in this area. Yet Moscow seems reluctant to pressure Assad on political matters and continues to provide air support for the Syria army's offensives to seize control of opposition-held areas.

Ensuring the success of the Syrian political settlement and the subsequent transition process is a diplomatic priority for Russia in 2018. The mission is even more important given that Syria will remain at the core of Moscow’s policy in the Middle East. Russia’s stated second priority — and first in the military domain — will be the fight against remaining terrorist groups in Syria. On Dec. 27, Russian army Gen. Valery Gerasimov, the chief of general staff, said in an interview with Komsomolskaya Pravda that Russia’s principal military objective for 2018 will be to "eliminate Jabhat al-Nusra [now part of Hayat Tahrir al-Sham] … which continues to operate in some de-escalation zones.”

Gerasimov recognizes that “the situation [in Syria] is still unstable” but said that despite Moscow's troop drawdown, “[Russia] has forces in Syria capable of delivering an adequate offensive if needed.” He added, “We’ll also maintain a naval presence in the Mediterranean."

Indeed, days before Gerasimov’s remarks, both chambers of the Russian parliament approved an agreement between Moscow and Damascus to extend the lease on Russia's naval facility in Syria's Tartus. The lease is for 49 years and allows Russia to modernize and drastically expand the facility. The base currently can accommodate only one warship; the expansion will create space for a maximum of 11, including nuclear-powered vessels.

The exact number of Russian forces and military equipment in Syria is classified. Yet some authoritative sources suggest Moscow reduced its aircrafts to one squadron but maintained S-400 defense missile systems (located in Hmeymim and Masyaf), an S-300V4 air-defense battery (which covers the Tartus base), and several Pantsir-S1 anti-missile and anti-aircraft systems. This is in addition to military police units, military advisers and instructors, drone operators, and engineers.

In 2017, a certain behavior pattern was crystallized. Applying a stock market metaphor to the way Moscow and Washington behave and see themselves in the Middle East, it seems that the former pursues a bullish strategy while the latter is bearish. For Russia, the political market of the Middle East is booming. The “shares” it has acquired by engaging with Syria and other countries are rising in political value and Russia feels it’s prepared for long-position investments.

It may be just a matter of perception, but Moscow is now seen as a primary go-to for regional states that have been flocking to the Russian capital throughout the year. Most, if not all, only hope to get Moscow on board to solve their own regional, local and even tribal conflicts of interests. Nevertheless, Russia can praise itself for getting what it was aiming for: to be consulted, heard and feared.

Operationally, the Syrian campaign has been a testing ground for Russian military reform, with Moscow having tested about 200 types of newly manufactured and modernized arms. Senior officials in the Russian government observe a much bigger demand for Russian weaponry around the globe. The United States is also interested in more global arms sales.

Russia’s Syria commitment, however, is a serious long-term liability. Moscow owns this problem — from the fate of Assad to the humanitarian aid to the restoration of Syria. To address these challenges in 2018 in an adequate and face-saving manner, Russia might need much closer engagement with regional stakeholders. This is where “the shares” of political influence accumulated over 2017 may come in handy.

In this context, the way Russia interacts with the United States on different levels is of special importance to their bilateral relations and the security of the region. Over the course of the year, Moscow and Washington have gone through three major types of interaction: confrontation, cooperation and coordination. In 2018, the relationship between the two powers is likely to continue to evolve around the “triple Cs”: Russia will seek greater cooperation, try to balance confrontation and make the most of coordination.

Disillusioned over the possibility of “cooperation” with the United States in the true meaning of the word, Russia’s top decision-makers don’t seem to have given up on the idea that seeking such opportunities, wherever possible, needs to continue. Needless to say, however, there are far more signs mounting of a confrontation at this point. Moscow has been persistent in its criticism of the US military presence in Syria, going as far as accusing Washington of “transferring and training terrorists.” In the interview with Komsomolskaya Pravda, Gerasimov said the Russian Defense Ministry estimates there are some 350 militants at the US al-Tanf base, with 750 more at the Kurd-controlled al-Shaddadi camp.

The bottom line of the criticism is that the American military presence in Syria will continue to be one of Russia's principal irritants in 2018. The possibility of more unfriendly encounters in the skies is making both militaries nervous. Thus, there is still the need for a “nonconflict existence” mode, something Tillerson and Lavrov mulled over in April during Tillerson's first trip to Russia as secretary of state.

In this respect, coordination appears to be the best acceptable form of interaction for the two states: It’s supposed to help shield against the fatal risks that can be encountered during a confrontation, but it could also serve as the first step toward something more constructive. The parties' deconfliction agreement, which clearly was a vital element of their coordination, led to subsequent talks on setting up the southern de-escalation zone. Should the parties decide to move on to other levels — and so far Moscow has proposed joint operational planning, joint surveillance and joint strikes on terrorists — it will be a brand-new level of interaction. For now, however, this doesn’t look plausible.

In 2018, both Russia and the United States will hold critical elections that will largely define their political trajectories for years to come. Presidential elections in Russia in the spring and US congressional elections in the fall will affect decisions Moscow and Washington make regarding each other and the Middle East throughout the year. Syria and the Middle East in general may not be the most complicated issues on the bilateral agenda, compared with North Korea, Ukraine or the arms control agreements. But they certainly maintain enough potential conflict to swiftly ignite serious tensions and bring the two nations to the edge of a direct military confrontation.