3 Russian theories on why the US hit Syria

Russian analysts have differing theories on just how and why the United States bombed a Syrian air base. 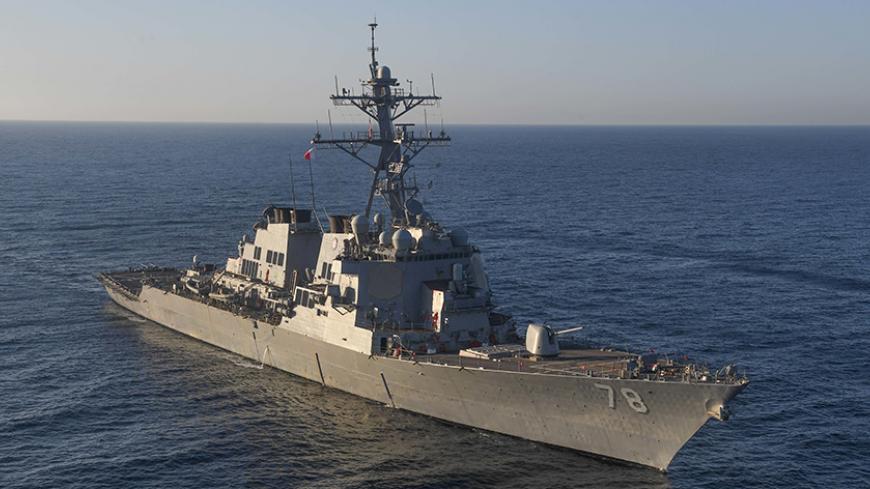 The guided-missile destroyer USS Porter (DDG 78), which was a part of the cruise missile strike against Syria, transits the Mediterranean Sea on March 9, 2017. - photo by Ford Williams/US Navy/Reuters

It looks like the on-again, off-again US-Russia relationship in the Syrian civil war suffered another painful, if not fatal, blow last week when the United States launched cruise missiles at a Syrian regime airfield in retaliation for a gas attack on Syrian civilians.

The US action triggered a predictably harsh reaction in Moscow, which has been calling for a thorough investigation of the April 4 poison gas attack on the Syrian town of Khan Sheikhoun. The gas attack killed dozens of people and injured hundreds. Syria has denied using chemical weapons in that attack.

The Russian Foreign Ministry’s official statement called the April 7 US action “an irresponsible approach that aggravates problems the world is facing.”

The United States fired 59 missiles at Shayrat air base in Homs province. Russian Foreign Minister Sergey Lavrov compared the attack with the US invasion of Iraq in 2003. “Back then, they at least tried to produce some evidence [that Iraq was producing anthrax]. … Now they didn’t even bother to present facts,” he said.

The gloomy forecasts about a potential US-Russia escalation in Syria are understandable: From what can be observed, Moscow and Washington are fast approaching a direct military clash. However, there’s a lot that isn’t obvious that may just be the key to understanding the current developments.

Though shaken in the early hours of the reported attacks, Russian decision-makers and the expert community eventually adopted a more restrained tone in considering reasons behind the US attack. For now, there are at least three theories.

1. “There’s a new sheriff in town.” The attacks reflect the promise US President Donald Trump campaigned on: the return of a “strong leader.” The impetus for the attack may have been domestic, international or both. If it was the former, then it’s mostly about impressing the domestic constituency, fixing failing ratings, winning points with Congress and distancing himself from the image of the “Kremlin candidate.” If the impetus was about his international posturing, he had to send a clear message to America’s foes and allies: Please the Israelis, satisfy the Gulf, alert Iranians, warn North Koreans and strip Russians of the perception that they run the show.

The Kremlin was puzzled by this move from someone it had expected to be a partner against international terrorism. Thus came the reaction from Russian Foreign Ministry spokeswoman Maria Zakharova: “Western analysts say the ‘Russian threat’ is derived from Russia’s unpredictability. Today we witnessed that the real country that is unpredictable is the United States.” The message April 7 from America’s UN ambassador, Nikki Haley, was also alarming, as it was seen as signaling there could be more US military action.

Vasily Kashin, a senior fellow at the Center for Comprehensive European and International Studies at the Higher School of Economics in Moscow, said Trump's intent was clear when he ordered the attack while Chinese President Xi Jinping was in the United States “to show his own swagger.”

“I believe it was a mistake,” Kashin said on Facebook. “The Chinese will take it as an intentional humiliation. They will put up a good face but at some point will take revenge.”

Elena Suponina, a Middle East analyst at the Russian Institute for Strategic Studies, a think tank closely associated with Russian security services, said in a TV broadcast that the attacks are “a dangerous invitation to a dangerous game.” Under this logic, Trump has chosen a thorny path to his own potential confrontation with Russia. Given how much Moscow has invested in Syria, there’s little reason to presume Russian President Vladimir Putin will back off now.

Kirill Benediktov, the best-selling author of a Russian-language political biography of Trump titled "Black Swan," says there’s still a silver lining in all of this.

“[Trump] never starts negotiations unless he is in a strong position,” Benediktov told Al-Monitor. “He starts off his game using his trump cards. … His message to Russia is: ‘Just wait and see what else we can do.’ But this is also the moment when you can start a serious conversation with him.”

2. “The tail wags the dog.” In this hypothetical, the Syria strikes weren’t Trump’s decision. He might have been simply cornered by public pressure, as well as by Democrats and Republicans, to take action against Syrian President Bashar al-Assad. He might have been tricked into believing that Assad alone was to blame for the gas attack, just after Trump had said he wasn’t opposed to the Syrian president remaining in power. In this narrative, the forced departure of Steven Bannon from the National Security Council signals a shift in the administration’s policy, and the Syria strikes were one result.

Another approach to this second narrative says the gas attacks were perpetrated by a “losing party” in Syria — whether this party is the United States or regional players. The behavior of Israel and Turkey in this respect is remarkable. Israel has long sought the destruction of the Syrian chemical arsenal. Turkey’s influence in Syria is fading, so it has quickly shifted from supporting the peace process with Russia and Iran to supporting the US military operation.

If these arguments are true, Trump is now closer to the hawkish tradition of the Republican right wing and is more dependent on those in the establishment he has been fighting until now, as well as American allies that have proved unreliable in the past, such as Turkey and some Gulf states. This scenario also presents virtually zero prospects for US-Russia cooperation in Syria.

3. “The art of the deal.” The military strikes might not have been coordinated with Moscow, but there was some kind of an agreement via military or intelligence channels that the action would be taken for political reasons that would sit well with the White House and the Kremlin. Those supporting this third narrative point to the rather courteous nature of the bilateral communication before the attack. The Department of Defense says the United States warned Russia ahead of the strike “to minimize risk to Russian or Syrian personnel.” Syria’s armed forces were also warned and “took precautions in more than one military point, including in the Shayrat air base.”

Only 23 of the 59 cruise missiles launched actually hit their targets, which Moscow says indicates that the United States never really intended to inflict serious damage. As a result, the strikes destroyed only one equipment depot, a training building, six MiG-23 aircraft in repair hangars and a radar station, while the runway, taxiways and Syrian air force aircraft in parking areas remained intact.

One theory insists that since the poisonous gas attack was the first serious international crisis for the American president, he had to respond forcefully. Yet, unwilling to risk a full-scale war with Russia, he had to have an agreement with Moscow that Russia’s response wouldn’t go beyond the expected heated rhetoric and some symbolic moves that wouldn’t hurt American interests. The strikes would punish Assad and satisfy warmongers in the United States and the region — but the conflict could be mitigated eventually, as Lavrov and US Secretary of State Rex Tillerson meet April 11-12.

However, the Kremlin said Tillerson will not be meeting with Putin, Reuters reported April 10.

Another theory is that there were no formal contacts between Russia and the United States, but the Russians knew long ago that the attack was coming. The Russian Defense Ministry statement on the US strikes reads: “It is obvious [the attacks] had been planned long before this event. It is necessary to conduct reconnaissance operations, to plan and prepare the missile flight paths, and put them on full combat alert. It is clear … the events in Khan Sheikhoun [were] just a formal reason for the attack.”

If Moscow knew about the attack in advance, then it’s just a pinprick from the military perspective and has zero influence in terms of changing the status quo. Alexey Khlebnikov, a Middle East analyst, agrees. “The attacks didn’t change much on the ground in Syria but may modify the dynamics of the conflict,” he told Al-Monitor. Russians let the strikes pass either for the public relations reasons listed above or to send their own message to Assad. In the days after the chemical attack, Putin’s press secretary Dmitry Peskov made it clear that Russian support for Assad is not unconditional, but that it is incorrect to believe that Russia “can convince Mr. Assad to do whatever is wanted in Moscow.”

Furthermore, the narrative holds that there is a role for Israel to play. Russia’s statement reaffirming its recognition of West Jerusalem as the capital of Israel came April 6, in the middle of the latest Syrian crisis.

Moscow sees the incident as an important indication that Trump intends to set his own rules of the game, which could actually prove helpful in future dealmaking on Syria. On a positive note, the United States and Russia continue to talk, and Tillerson’s visit to Moscow hasn’t been called off. This sets the table for a substantive agenda.