How Turkey's 'hasty' support for US missile strike could backfire

Turkey's rash decisions about Syria could make it appear fickle to both Russia and the United States. 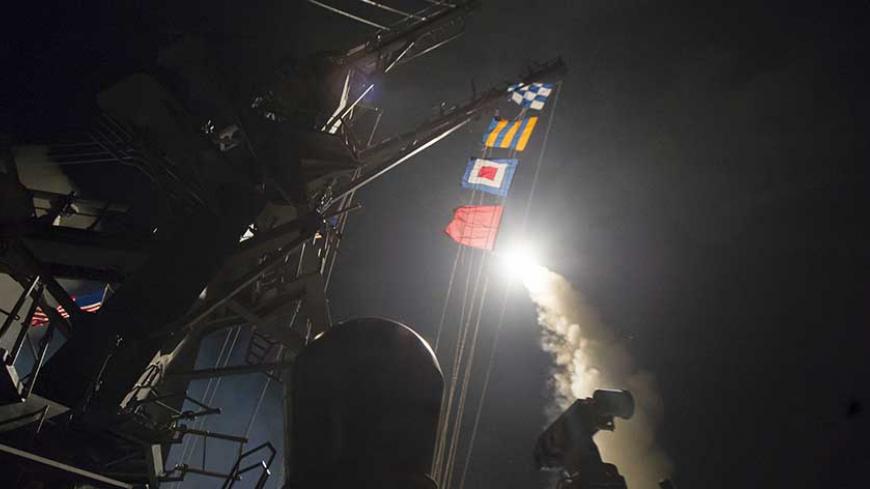 The physical damage the United States inflicted on a Syrian air base last week wasn't extensive, but there are significant repercussions.

The United States said it launched the April 7 attack — its first ever in Russian-dominated airspace — because just days before an Su-22 aircraft from the base had dropped chemical warfare bombs on the Syrian town of Khan Sheikhoun, killing civilians, including many children.

The Syrian gas attack ostensibly was targeting rebel opponents of the regime of Syrian President Bashar al-Assad in a civil war that has lasted more than six years. The April 4 bombing killed dozens of people and injured hundreds more. Syria denies it used chemical weapons in the attack.

Two US Navy destroyers deployed in the eastern Mediterranean Sea hit Syria’s Shayrat air base with 59 BGM-109 Tomahawk cruise missiles. Reports said the missiles hit about 20 aircraft on the ground, some hardened aircraft shelters, maintenance facilities and an ammunition depot.

Russia immediately reported that only 23 out of 59 missiles had hit their targets, and that in less than 24 hours, planes taking off from Shayrat were again bombing Khan Sheikhoun.

Turkey, Israel and Saudi Arabia were pleased with the US operation, while Russia, Iran and North Korea protested it. China remained quiet. This apparently cosmetic attack, which for the time being appears to be a one-off, doesn’t affect the tactical picture on the ground. It's also too early to say that the United States has shelved its priority of eliminating the Islamic State (IS) and shifted its attention to removing Assad from power. That shift could be a possibility if we see a second or even third wave of US attacks on targets west of the Euphrates River, in areas with Russian air superiority or on Damascus.

As for US President Donald Trump, he succeeded in launching an operation that then-President Barack Obama couldn’t manage at Ghouta in 2013, and in a way reminded the world he has options beyond his 140-character tweets. With this attack, Trump scored a number of points:

According to defense analyst Arda Mevlutoglu, Tomahawk missiles have been the vanguards of US military intervention in nearly all diplomatic crises since 1991 and are known as “punisher” systems. “Findings indicate that the Assad regime had actually carried out a chemical attack. The United States — with its attack — punished the Assad regime but also made it difficult for Russia to claim freedom of action in Syrian airspace,” Mevlutoglu told Al-Monitor.

A day before the US attack, Turkish President Recep Tayyip Erdogan had said, “If there is actually an action, we are ready to do our part.” Afterward, Erdogan said, “The attack is a positive step but not enough.”

In addition to skyrocketing Ankara's expectations for toppling Assad — something that has been off the agenda for the past year — the US action also gave Turkey hope for strengthening the Sunni opposition and establishing an Idlib-centered no-fly zone.

Many in Ankara believe that the US attack created a new balance to the detriment of the Russia-Iran-Assad bloc. Although it's not voiced openly, some in Ankara feel that this attack could help dilute US dependence on fighters in the Kurdish People’s Protection Units (YPG) — something Turkey has longed for.

However, Ankara put out an unnecessarily hasty statement saying it would provide all types of support for the US attack. It could find itself sandwiched between Trump and Russian President Vladimir Putin. This is a time when Turkey should avoid U-turns. There is still the question of whether Turkey will align with Trump or with Putin in the post-IS period and during Syria's reconstruction. Ankara’s policies should be more level-headed, cool and based on field developments.

There is a struggle for power between Russia and the United States over the future of Syria, and Turkey is stumbling back and forth between the two.

Ankara is sometimes extremely pro-Washington and sometimes pro-Moscow. That could lead to Turkey being perceived as an inconsistent, unpredictable and therefore unreliable player. Foreign policy should be based on well-thought-out, solid principles — not impulsive reactions.

Turkey's offer of unconditional support wasn't a good move; it could raise serious questions with Damascus and Russia. At the least, Turkey could have negotiated with the United States for something in return before making such a rash statement. This also brings back the image that Turkey is actually still pursuing the departure of Assad, an aim Russia hoped Ankara had dropped to prioritize the fight against IS.

One significant Russian reaction to the US attack was to suspend the communications agreement between the Russian Defense Ministry and the US Department of Defense to ensure the safety of air operations. Russia's decision will definitely affect Turkey. With its occasional flights over northern Syria and because it still has about 1,000 soldiers there, Turkey is compelled to coordinate the safety of its troops with both the United States and Russia.

So far it appears that Trump, in his third month in the White House, has put himself on the record as a US president who will not hesitate to use force.

A long, tangible tension in US-Russia relations over Syria seems very likely. Trump sent a message to Russia that it can’t single-handedly impose its will in the Middle East. Even Turkey, which until a week ago appeared to be pro-Moscow, rather hastily changed gears and lined up with Washington.

Has Turkey made a mistake by so precipitately lining up with Washington and reverting to its “Assad must go” doctrine? Will Turkey’s animosity toward Assad trigger new tensions with Russia? How will calling off the coordination and communication between the United States and Russia in Syrian air space affect Turkey’s operations?

I don’t think we'll have to wait long to find the answers.