The Donald Trump administration made it clear to Syrian President Bashar al-Assad’s forces that it will not allow another gas attack. 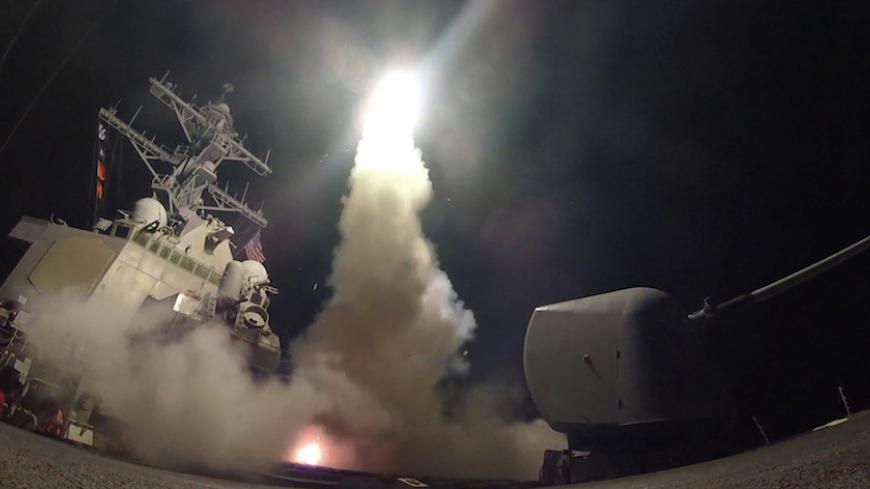 The US Navy guided-missile destroyer USS Porter conducts strike operations while in the Mediterranean Sea. The US Defense Department said the operations were part of a cruise missile strike against Syria on April 7, 2017. - REUTERS/Ford Williams

WASHINGTON — A late-night White House warning on June 26 that the United States had detected potential preparations for a chemical weapons attack in Syria was meant as a deterrent, the Donald Trump administration said today.

The White House defended the unusual statement — and the sparsity of evidence it has provided for making it — by saying it was meant to save lives.

“Look, I think that our goal every day is to do what we can to protect life in all forms and to take steps to move the ball forward in defeating [the Islamic State], defeating all efforts at terrorism,” White House deputy spokeswoman Sarah Sanders said at her White House press briefing. “I think the statement yesterday helped do that.”

The remarks come after the White House sent out a press statement to reporters just before 10 p.m. on June 26 warning that if Syrian President Bashar al-Assad “conducts another mass murder attack using chemical weapons, he and his military will pay a heavy price.”

On that day, the United States and its allies say, Assad’s forces conducted a sarin gas attack against the town of Khan Sheikhoun in Idlib province, killing more than 70 people. The Trump administration retaliated on April 7 by lobbing 59 cruise missiles at the Shayrat airfield, which was used as the base for the attack.

Monday’s White House warning was prompted in part by the fact that, in the days before April 4, the United States had detected activity and chatter that turned out to be preparations for the gas attack, a US official said. This time, when the Trump administration detected increased activity at the Shayrat air base and elsewhere, it did not want to just stand by.

“We were caught looking the first time it happened,” the US official, speaking not for attribution, said. “There was info, chatter … that we had not completely tied together. … So my feeling is that this time, when they detected activity, we want to … send a clear message to Assad, that we are not going to stand by.”

The Pentagon said today that the United States had detected possible preparations for a chemical attack at the Shayrat airfield over the previous day or two.

"This involved specific aircraft in a specific hangar, both of which we know to be associated with chemical weapons use," Pentagon spokesman Jeff Davis told reporters.

Secretary of State Rex Tillerson spoke with Russian Foreign Minister Sergey Lavrov on Monday morning before a meeting at the White House during which the decision to issue the statement was made, the State Department said today.

“We know from past experience the Syrian regime has used chemical weapons on its own people,” State Department spokeswoman Heather Nauert told reporters today. “This is a very serious and grave matter.”

One expert on the Russia military suggested the US warning was based on intelligence that Syrian forces had been retrieving material from a storage facility at the Shayrat air base.

“I suspect they have observed Syrian forces get something from a storage facility and are worried they might be mixing the agents in preparation for another attack,” Michael Kofman, an expert with the Kennan Institute, told Al-Monitor. “Undoubtedly they don't know for sure, but the confidence level must be reasonably high for them to issue this statement in an effort to deter.”