The White House has warned it could take action against Damascus if reported gas attacks continue. 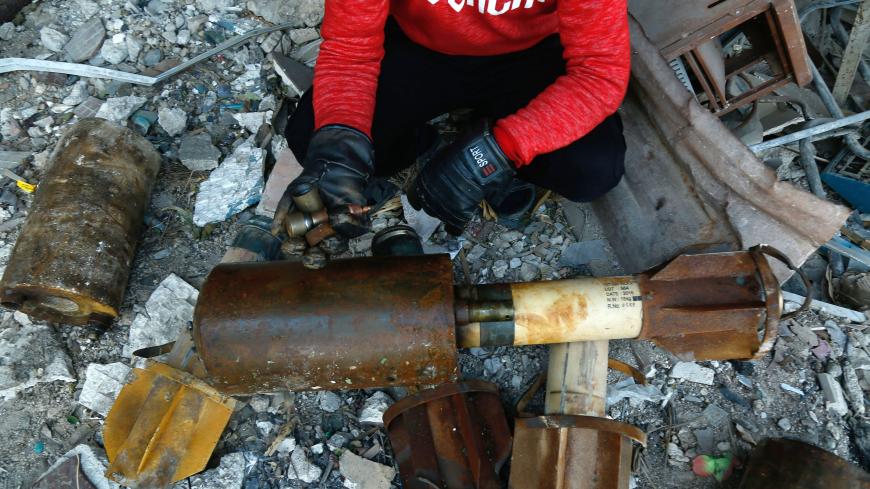 A Syrian man shows remnants of rockets reportedly fired by regime forces on the rebel-held besieged town of Douma in the eastern Ghouta region on the outskirts of the capital, Damascus, Jan. 22, 2018. - GETTY/Hasan Mohamed

WASHINGTON — The United States warned Feb. 1 that it was assessing reports of the repeated use of suspected chlorine gas attacks by the Syrian regime in the past month, and it warned that it could take action if they do not stop.

“We are watching very carefully, and the United States is extremely concerned about yet another report of the use of chlorine gas by the Syrian regime to terrorize innocent civilians in east Ghouta, Syria, outside of Damascus,” State Department spokeswoman Heather Nauert told journalists Feb. 1.

“If confirmed, the attack is the third reported instance in the past 30 days in east Ghouta,” Nauert said.

"The Assad regime continues to use chemical weapons to attack civilian populations in Syria," an NSC spokesperson told Al-Monitor by email Thursday. "In doing so, they are responsible for unspeakable atrocities, including thousands of innocent deaths and severe injuries."

Senior administration officials, briefing reporters at the White House earlier Feb. 1, said the Syrian regime was changing its methods, using ground-based mortar attacks rather than aerial-dropped barrel bombs, possibly to be harder to detect and produce fewer casualties so as to not provoke a military response. It was also suspected of using chlorine gas in recent attacks in the Damascus suburbs, rather than deadly sarin, whose alleged use on civilians in rebel-held Khan Sheikhoun, Idlib province, in April 2017 prompted the Trump administration to launch strikes on a Syrian air base.

“It will spread if we don’t do something,” a US official, speaking not for attribution, told reporters at the White House Feb. 1.

“We reserve the right to use military force to prevent or deter the use of chemical weapons,” the US official said.

The latest US warnings came a week after Secretary of State Rex Tillerson charged Russia with failing to make the Syrian regime live up to its 2013 pledge to get rid of its chemical weapons program and with shielding the Syrian regime from accountability at the United Nations.

“There is simply no denying that Russia, by shielding its Syrian ally, has breached its commitments,” Tillerson said at a Jan. 23 meeting, convened by France, of the International Partnership Against Impunity for the Use of Chemical Weapons.

“Russia’s failure to resolve the chemical weapons issue in Syria calls into question its relevance to the resolution to the overall crisis,” Tillerson continued. “At a bare minimum, Russia must stop vetoing and at least abstain from future Security Council votes on this issue.”

“The recent attacks in east Ghouta raise serious concerns that Bashar al-Assad’s Syrian regime may be continuing its use of chemical weapons against its own people,” Tillerson said. “Whoever conducted the attacks, Russia ultimately bears responsibility for the victims in east Ghouta and countless other Syrians targeted with chemical weapons since Russia became involved in Syria.”

Tillerson’s condemnation of Russia came in the same week that three Russian intelligence chiefs were secretly visiting Washington for meetings with their US counterparts, ostensibly to discuss cooperation to counter terrorism.

The heads of Russia’s Foreign Intelligence Service, Federal Security Service and Main Intelligence Directorate were in Washington for meetings with CIA Director Mike Pompeo and Director of National Intelligence Dan Coats, the Washington Post reported, after Russia's ambassador to the United States, Anatoly Antonov, gave an interview to a Russian media outlet stating that he had hosted intelligence service chief Sergey Naryshkin at his residence.

"The United States calls on Russia to show leadership by joining the international community in condemning the Assad regime for its heinous use of CW [chemical weapons]," the NSC spokesperson said. "Russia should use its leverage with Syria to stop these atrocities."

The consultations come as the Trump administration is considering appointing a high-level Syria envoy to try to advance the Geneva Syria political process, Syria experts told Al-Monitor. Current US Syria envoy Michael Ratney has been based in Jordan for the past month, sources said. Meanwhile, Daniel Barnard has joined the National Security Council as a Syria director, the sources said.

US efforts to pressure Russia to try to advance a Syria political settlement are complicated by Russia's political calendar, Russia experts said.

"Russia has an election in March. They can't afford an embarrassment ahead of the election, but in Moscow they are fearful of some sort of US provocation during this time period," Michael Kofman, a Russia expert with the Kennan Institute, told Al-Monitor. "Most of the US rhetoric right now seems designed to pressure Russia into leaning on Assad. That's easier said than done for Moscow — if they could do it so easily, they would be. It's not like they're looking for an incident with the election looming."

Kofman said the US warnings on Syria's suspected recent chlorine gas attacks were likely meant to deter it from carrying out a larger-scale attack.

They are "probably looking to deter any further employment — afraid that Assad is salami-slicing the US threat to use force," Kofman said. "This has happened before. First chlorine, then sarin, then a large attack. I suspect they're making it an issue to prevent Syrians from slowly inching toward another serious use of sarin."