Shadowed by an investigation into Moscow's interference in the US election, US President Donald Trump welcomed Russian Foreign Minister Sergey Lavrov to the White House May 10. 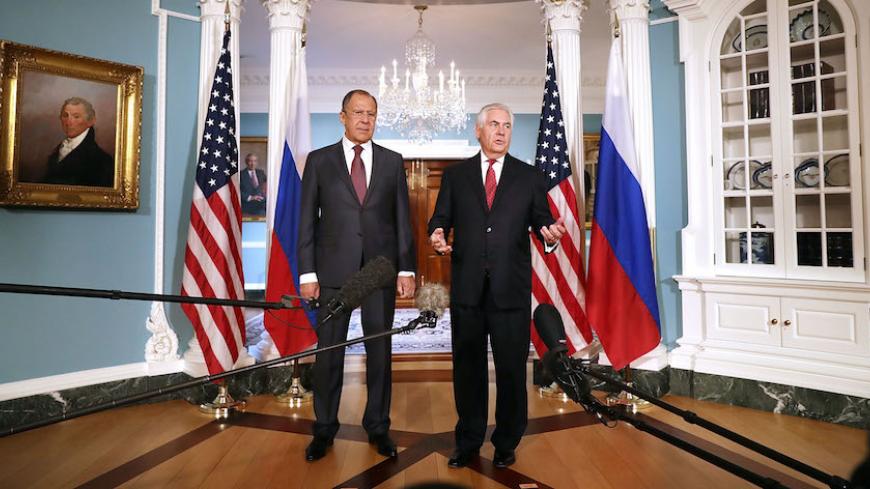 Russian Foreign Minister Sergey Lavrov (L) and US Secretary of State Rex Tillerson talk to reporters in the Treaty Room before heading into meetings at the State Department, May 10, 2017, Washington, DC. - GETTY/Chip Somodevilla

WASHINGTON — One day after he abruptly fired the FBI director investigating Russian interference in the 2016 US presidential election, President Donald Trump welcomed Russian Foreign Minister Sergey Lavrov to the White House May 10, in Lavrov’s first trip to Washington since 2013. The meeting was closed to US reporters or even a press pool, but the Russian Ministry of Foreign Affairs posted photos of Trump warmly greeting and shaking hands with Lavrov and Russian Ambassador to the United States Sergey Kislyak, whose meetings with Trump associates during the campaign and transition have been a subject of the FBI investigation.

Strangely, no official US photographs of the meeting were released by the White House, adding to the sense of strangeness and signs of growing anxiety and alarm in the Trump White House at the investigations into whether Trump associates coordinated with the Russian campaign to tip the election in Trump’s favor. When the White House press pool was assembled to drop in on what they thought would be the Trump/Lavrov meeting, they found instead Trump sitting with an aged and shrinking Henry Kissinger, now 93, who had served as national security adviser when President Richard Nixon resigned over the Watergate scandal in 1974.

Trump told the press pool that he had a "very, very good meeting" with Lavrov.

Both sides want to end the “the horrible, horrible killing in Syria as soon as possible and everybody is working toward that end,” Trump said.

He had met with Kissinger, to talk "about Russia and various other matters."

Lavrov, at a subsequent press conference at the Russian Embassy, said he had discussed Syria and the proposal for de-escalation zones with Trump. They also discussed Ukraine, the Israel-Palestinian peace process and Afghanistan. He appreciated that the Trump administration was trying to reach practical solutions to problems and was not as ideological as the Obama administration, he said.

“There is a desire to move into the direction of settlement of all these problems,” Lavrov said. “Both President Trump and President Putin are willing to attain concrete results that would help removing problems from the international agenda."

“We certainly welcome US cooperation on the matter and hope that it will help move forward political settlement in Syria,” Lavrov said.

Before meeting Trump at the White House, Lavrov met US Secretary of State Rex Tillerson at the State Department. They “discussed the importance of defeating [the Islamic State], de-escalating the violence in Syria and ensuring that humanitarian assistance reaches hundreds of thousands of civilians throughout the country,” State Department spokeswoman Heather Nauert said in a readout. They also “restated support for the UN-led political process in Geneva, which is central to international efforts to bring about an enduring resolution to the conflict.”

Asked by reporters if Trump’s firing of FBI Director James Comey cast a shadow on their meeting, Lavrov claimed to be unaware of the matter and said, “Was he fired? You’re kidding.”

Tillerson and Lavrov were due to fly, separately, to Fairbanks, Alaska, later in the day for an Arctic Council Ministerial meeting.

Lavrov’s first meetings in Washington in four years came after Undersecretary of State Tom Shannon met Russian Deputy Foreign Minister Sergey Ryabkov in New York on May 8 as part of an effort that was announced when Tillerson met Lavrov in Russia last month to set up a high-level diplomatic channel to try to reduce irritants in the US-Russian bilateral relationship. Lavrov’s meetings also follow a phone call between Trump and Russian President Vladimir Putin last week.

The Russians are trying to create a sense of momentum that they are moving to normalize ties with the United States, Russia expert Michael Kofman said.

“They have not lost hope that they can make some kind of progress on US-Russia relations,” Kofman, with the Kennan Institute, told Al-Monitor.

Lavrov is “coming here with a plan — he is pulling a John Kerry,” Kofman said. “He is essentially coming here with an initiative [for Syria de-escalation zones]. It takes the energy of the new administration and its desire to stabilize Syria and engage in a post-conflict settlement, and channel it into the plan agreed by Russia, Iran and Syria. They [Russia] are actually leading the negotiations, they are still the ones driving the conversation.”

Russia has been circulating a draft UN Security Council resolution endorsing the Astana agreement on Syria zones of de-escalation.

The US mission to the UN said “they will not accept it as is,” Bassam Barabandi, a former Syrian diplomat with the Syrian opposition, told Al-Monitor. “I know some diplomats in the Security Council are asking Russia to provide maps.”

Regarding the intensified US-Russian diplomacy, coming in parallel to intensified American focus on the FBI and congressional investigations regarding the Russia/Trump issue, former US diplomat Paul Saunders said they can’t afford to wait.

“I think the administration can’t really afford, and the American people can’t afford, for diplomacy with Russia to stop,” Saunders, now with the Center for the National Interest, told Al-Monitor.

Trump and Putin agreed they would meet on the sidelines of the G-20 summit in Hamburg, Germany, in July, Lavrov also said.