Acting Assistant Secretary of State for Near Eastern Affairs Stuart Jones is set to attend Syria cease-fire talks in Astana on May 3-4 after Trump-Putin confer on Syria. 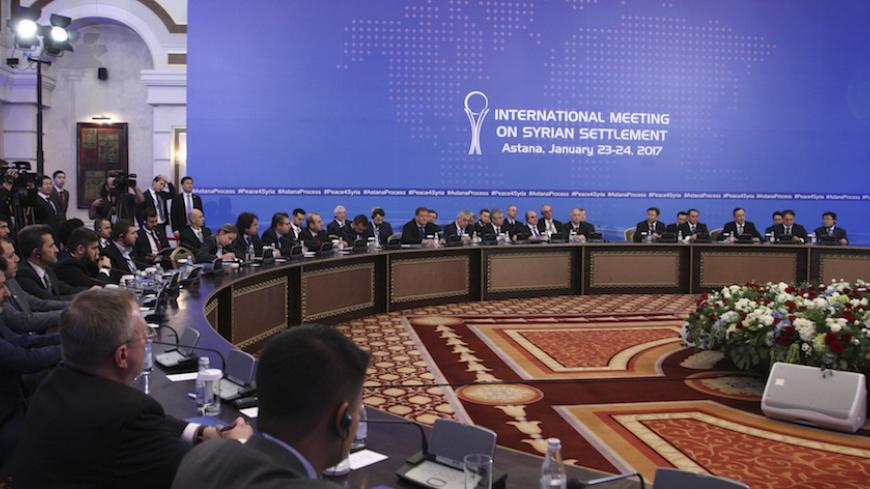 WASHINGTON — In a sign of potential US openness to explore working with Russia on trying to de-escalate the war in Syria, the Trump administration said it was sending a top diplomat to observe Russian-brokered Syria cease-fire talks to be held in Astana, Kazakhstan, May 3-4.

The Trump administration is sending a senior Middle East envoy, Acting Assistant Secretary of State for Near Eastern Affairs Stuart Jones, to the Astana talks instead of US Ambassador to Kazakhstan George Krol, who had previously attended as an observer.

However, the US administration has doubts that the Russians can deliver the Bashar al-Assad regime on commitments it makes, said experts engaged with the US administration as it formulates its Syria policy. “It's high engagement from the US to test the Russians if they can deliver,” Bassam Barabandi, a former Syrian diplomat now with the Syrian opposition, told Al-Monitor, referring to the decision to send Jones.

The US administration wants to “see if the Russians can deliver, but that doesn’t mean they [Trump administration officials] have bought into the Astana process,” the Middle East Institute’s Randa Slim said.

“Because of the history [of the US and Russia last year] trying to work out [a Syria] cease-fire and failing at it, the Americans are going to wait and see,” Slim said. “They want to see if Russia is going to deliver before they engage fully. They have gone a step further by sending Stu Jones.”

The decision to send Jones to the Astana talks was announced after US President Donald Trump held a phone call with Russian President Vladimir Putin on May 2, which focused largely on Syria and a Russian proposal for “zones of de-escalation” in Syria. But the decision to send Jones appeared to have been made one day earlier, sources told Al-Monitor, noting that Jones on May 1 had canceled a speech he had been due to give a Washington-area think tank, saying he had to go to Astana.

“President Trump and President Putin agreed that the suffering in Syria has gone on for far too long and that all parties must do all they can to end the violence,” the White House said in a readout of the Trump-Putin phone call May 2.

“The conversation was a very good one and included the discussion of safe, or de-escalation, zones to achieve lasting peace for humanitarian and many other reasons,” the White House readout said. “The United States will be sending a representative to the cease-fire talks in Astana, Kazakhstan, on May 3-4. They also discussed at length working together to eradicate terrorism throughout the Middle East. Finally, they spoke about how best to resolve the very dangerous situation in North Korea.”

The Kremlin said the focus of the Trump-Putin call had been on prospective coordination between the US and Russian efforts to fight terrorism in Syria, and said the two leaders had charged their respective secretary of state/foreign minister with looking for options to strengthen a Syria cease-fire.

“The focus was laid on the prospects for coordination of Russia’s and the United States’ action in fighting against international terrorism in the context of the Syrian crisis," the Kremlin readout of the call said, according to Russia’s Tass news agency.

Putin and Trump agreed the two countries’ foreign ministers should “look for options for the consolidation of the cease-fire and making it sustainable and controlled,” the Kremlin readout continued. “The goal is to create conditions for launching a real settlement process in Syria. Thus, the Russian foreign minister and the US secretary of state will inform the leaders about progress reached on this track.”

US Secretary of State Rex Tillerson spoke with Russian Foreign Minister Sergey Lavrov on May 1, and the two agreed to meet on the sidelines of the Arctic Ministerial in Fairbanks, Alaska, May 11-12, the State Department said.

The increasing US-Russian engagement on Syria comes as Russia has put forward a proposal for four “zones of de-escalation” in Syria.

The Russian proposal is suggesting the freezing of “the conflict in four areas, under the supervision of the Iranians, Russians and the Turks,” Slim — who runs a US-Russia dialogue on Syria as the head of Track 2 programs at the Middle East Institute — told Al-Monitor. Its goals are very limited, Slim said, and the version she saw lacks enforcement mechanisms.

“However, I don’t think the Americans are yet ready to engage in the same kind of cooperation that we have seen” during the Obama administration, Slim said. “Partly until now, Russia has not delivered the Iranians and the [Syrian] regime in Astana. So the Americans are going to vet this proposal. They see potential in it, enough to change their minds about engaging.”

The Syrian opposition considers the Russian proposal flawed because it legitimizes the presence of Iranian forces in Syria and does not call for any political process.

US officials believe that all sides will meet and that there could be de-escalation along lines of contact. However, US expectations for Astana are low, because there has been a gap between Russian proposals and what they have been able to deliver.