How are Syrian peace talks holding up?

There were no breakthroughs on the first day of negotiating between the Syrian regime and opposition representatives, but talks resumed this morning. 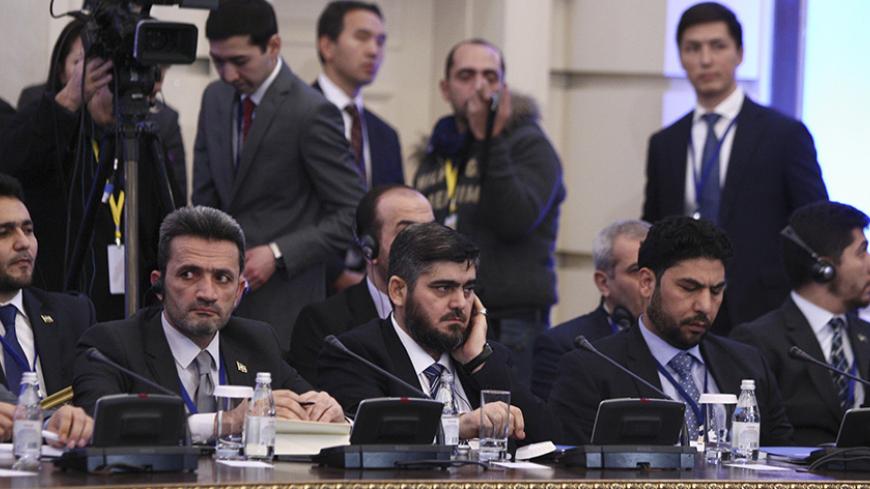 The first day of long-awaited negotiations between the Syrian regime and opposition groups began with recriminations and wrapped up with conflicting progress reports. The good news is all parties returned to the negotiations on Tuesday.

As this story was being written, the negotiations were still underway. The information coming from Astana, Kazakhstan, was scarce and at times contradictory. The Syrian opposition demanded the discussions be held behind closed doors without media access, except for occasional leaks and briefs from the delegates.

But even though there was no obvious breakthrough after the first day, if preparation is half the battle, the talks have a good foundation.

Astana, the capital of Central Asia’s largest country, was chosen for the talks for a good reason. Kazakhstan President Nursultan Nazarbayev is a rare leader who over the years has been able to build good working relations with all of the players involved — Russia, Turkey, Iran and the Arab world. Kazakhstan has long wanted to establish itself as a champion of “mediation diplomacy” and has a short but successful record of doing that work.

In preparing for the talks, Moscow reported strong communication among all parties. The amount of effort invested in bringing them to the negotiating table set high hopes that the talks would succeed. The mood carried through to the opening day of negotiations despite the predictably tense atmosphere between representatives of the Syrian government and the militant opposition groups hours into the negotiations.

Holding the event in Astana was seen as an attempt — particularly on Russia’s part — not to replace Geneva, but to “rebrand” the Syria talks. Unlike previous efforts in Geneva, this time the opposition is represented by the leaders of the militant groups fighting on the ground, and not just political opponents of Syrian President Bashar al-Assad “sitting in comfy offices in Europe or the Gulf,” as a Russian diplomat described them to Al-Monitor.

Russia’s primary go-to mediators were also different this time: Moscow changed the “cease-fire guarantors” from Europeans and Americans to Turks and Iranians.

The seating preferences at the talks are quite telling. Opposition forces preferred to be seated between the Turkish delegation and the US ambassador to Kazakhstan; representatives of the Syrian government sidled up to the Iranians.

Moscow came with the belief that the war fatigue suffered by key stakeholders would translate into a principled political will to seek a serious conversation over the future of Syria, although the process would be wearisome and time-consuming. The key objective at Astana was then to proceed with the transformation and turn the small yet operationally important agreements on the ground into a real platform for engaging the interests of the chief warring parties with those of the Syrian government. From the very start, however, the opposition set the precondition that the cease-fire must be maintained for any forward movement to be achieved during the talks. It soon became clear the militant groups weren’t prepared to go any farther at this stage and expected other serious matters to be discussed at other venues.

Russia has been working to assume a power-broker role. In the months prior to the talks, it made a U-turn in its attitude regarding some of the militant groups and pooled its efforts with Turkey to broker a cease-fire effective Dec. 30. As if this weren’t enough, on Jan. 12, Moscow and Ankara signed a memorandum “ensuring aviation safety during military operations in Syria” that stipulated joint military actions by Russia and Turkey in the country — something that was barely conceivable six months ago. On Jan. 18, Sergey Rudskoy, the head of the Chief Operational Department of the Russian General Staff, announced that nine Russian and eight Turkish attack aircraft had started hitting 36 Islamic State targets at al-Bab.

Moscow had also been actively involved in reconciling the Iranian and Turkish positions on Syria, though it has never been easy to soften the three states’ differences. The day before the Syria negotiations, the three held more than five hours of talks that a Russian diplomat described as “viscous,” underlying their sticky, uneasy course.

On the bilateral level, Moscow’s own conflict with Tehran over US participation in the peace talks popped up at a bad time. Commenting on Iran’s reluctance to invite Americans to Astana, the Russian president’s press secretary, Dmitry Peskov, made no attempt to conceal the sensitivity of the matter in the bilateral contacts.

“The situation is very complicated. … So it is a very complicated issue for a very careful play," Peskov said. Iranian concerns apparently spread a little wider, with some expressing uneasiness over the prospect of a potential rapprochement between Moscow and Washington, as US President Donald Trump is now in office.

Mikhail Bogdanov, Russia’s deputy foreign minister and President Vladimir Putin’s top official on Middle Eastern affairs, met with the US ambassador to Russia, John Tefft, last week to discuss the Astana talks. Bogdanov passed along an invitation for the United States to join. Yet the new US administration decided not to send a delegation but its ambassador to Kazakhstan, George Krol, as an “observer.” Iranians got what they initially insisted on. Russians were relieved of the need to show extra flexibility maneuvering in the same room between the new US team and Iranian partners, and the United States saved itself some awkwardness, as its diplomats wouldn’t yet have clear directions on their stances.

Iran’s role as a mediator has apparently evolved under pressure from the opposition, according to Maya Gebeily of Agence France-Presse. Gebeily saw a draft summary of the preparations that said, “A rebel negotiator told his team [he] would agree to Russia as the truce guarantor, but not Iran.” This development puts additional pressure on Russia, as the role of a mediator demands impartiality in the conflict. Russia’s first public expression of concern over “violations to the cease-fire by the Syrian government” is indeed an interesting development. So are the allegations that Russia and Iran split on the idea of a “power transition,” with Moscow being more flexible on the issue.

A major concern the Kremlin should have — and probably does — is whether this empowerment of Russia by the rebel groups is an intentional move to drive a wedge between Moscow and Tehran, to weaken the pro-government faction at the negotiations. That Moscow voiced its criticism of the Syrian army’s lax truce observation may be a sign Russia is prepared to apply additional pressure on Assad if it will move the talks in the right direction.

However, if Russia spots signs that the talks are played out or headed for derailment, Moscow might return to square one with its full-fledged support for Assad bombing the opposition. That obviously would be a far less preferable scenario for everyone.

So far the Astana process has made “modest progress” so far. Whether the key word is “modest” or “progress” will be seen between now and the next round of Syria peace talks in Geneva, scheduled for Feb. 8.