What prompted Russia’s shift in stance on Syria opposition?

Given Russia's policy on Syria in 2016 and its willingness to negotiate with Syrian opposition groups, it seems that Russian President Vladimir Putin favors a mediating role in the conflict. 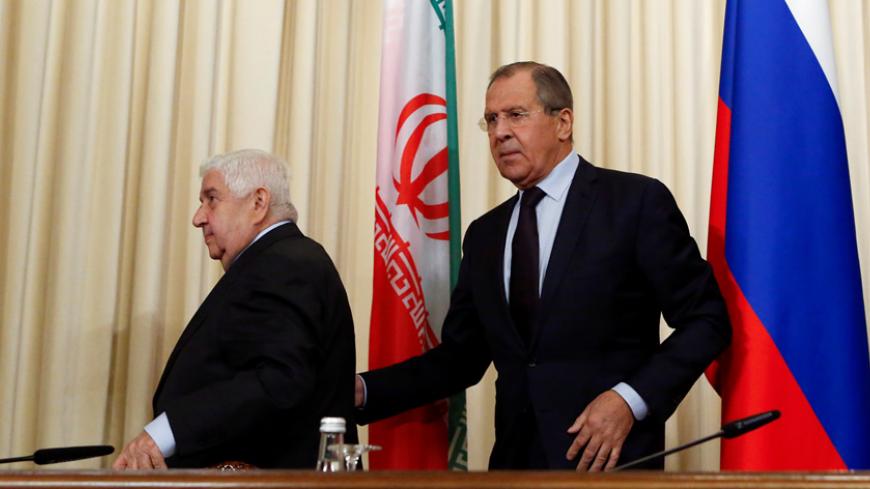 When 2016 was drawing to a close, Moscow surprisingly agreed to divide Syrian warring factions into “good” and “bad” guys and to recognize the idea of the “moderate opposition.”

On Jan. 10, Kremlin spokesman Dmitry Peskov announced the preparation of talks between the Syrian government and the armed opposition in Kazakhstan's capital, Astana, on Jan. 23. The rebels are seriously preparing for the talks. On Jan. 11, Astana hosted a meeting between Syria’s opposition figures and the nonmilitary opposition to find common ground for the upcoming negotiations. Previously, they accepted the terms of a deal to cease hostilities and confirmed their commitment to United Nations Resolution 2254 (2015) endorsing a road map for Syria’s peace process.

Moscow’s road to the recognition of large opposition movements, including Jaish al-Islam and Ahrar al-Sham, as negotiating partners was long and tortuous. In April 2016, at the UN, Russia insisted on blacklisting Jaish al-Islam and Ahrar al-Sham. Now Russia consents to the talks with them. When the Russian Ministry of Defense published the list of seven opposition factions Dec. 29, it raised many eyebrows among domestic and foreign experts. There have been very few Russian articles and commentaries expounding on this key step by the country’s military and political establishment and on the very selection criteria. Yet Russia’s move requires explanation, as something extraordinary has happened.

Russian Foreign Minister Sergey Lavrov said in October 2015 that the Free Syrian Army (FSA), and the moderate opposition in general, remained a phantom grouping with nothing to brag about. Since the very onset of Russia's military operation, Russia’s Ministry of Defense added its usual strong flavor of anti-Americanism to reports about the elimination of alleged Islamic State (IS) militants in Latakia and Idlib and the inexplicable destruction of Liwa al-Haqq’s headquarters in Raqqa province in Syria. Russia’s Foreign Ministry was insistent on establishing contact with the opposition in Syria. Unsurprisingly, it was Jaish al-Islam rather than IS and Jabhat Fatah al-Sham (formerly Jabhat al-Nusra) that officially declared war on Russia.

In this context, President Vladimir Putin’s statement that Russia was supporting FSA units — providing them with air cover, arms and ammunition in joint operations with Syrian troops against Islamist militants — came as a bolt from the blue in December 2015. Still, subsequent comments of Lt. Gen. Sergei Rudskoy, head of the Main Operative Directorate of the General Staff of the Russian armed forces, about the country’s support of the FSA's combating IS failed to clarify the situation. Some Russian experts supposed that Russian airstrikes had backed Liwaa Soqour al-Raqqa. Talal Salu, the spokesman for the Syrian Democratic Forces, confirmed the airstrikes, but denied any cooperation.

On Dec. 25, 2015, Russian airstrikes killed Zahran Alloush, the head of Jaish al-Islam, near Damascus and neutralized several field commanders of Ahrar al-Sham. The opposition regarded the bombings as an attack on the outcome of the expanded meeting in Riyadh that had been held Dec. 8-10, which was convened to set the stage for talks in Geneva and included Jaish al-Islam and Ahrar al-Sham, among others. The Jaish al-Islam and Ahrar al-Sham militant groups, which took part in the Geneva talks, openly read from the same script as IS and clearly demonstrated that they were on the same page, Lavrov said in April. However, Moscow started to alter its stance to some extent in the spring of 2016, when Russian special services reportedly offered assistance through Syrian intelligence to FSA rebel forces in exchange for cooperation and coordination to counter IS.

Subsequently, Russia mended fences with Turkey and approved Operation Euphrates Shield, albeit behind the scenes. In the summer, Ankara started to deploy troops in the buffer zone, including the units of Fatah Halab, the alliance of Syrian rebel factions. It eventually allowed the restoration of government control over eastern Aleppo, forcing the opposition to retreat to Idlib. These episodes can be defined as the turning points in Russia’s attitude toward Syria’s armed opposition. The public statements of the foreign minister first pointed to Moscow’s changing rhetoric in early October as Lavrov mentioned possible “joint law enforcement bodies” in Aleppo, which would include government law enforcement bodies, the police and the armed opposition groups, on condition that the latter distance themselves from Jabhat Fatah al-Sham. In early December, Lavrov publicly confirmed the Turkey-facilitated talks with the Syrian armed opposition.

The groups that do not throw their full support behind the Astana talks will be treated as forces that are undermining political conflict resolution and siding with Jabhat Fatah al-Sham as their foxhole buddy. However, despite Turkish pressure, the Syrian opposition doubts the willingness of Bashar al-Assad’s regime to compromise. It also lacks certainty that Moscow has persuaded Damascus and Tehran to abandon their efforts to reach Idlib and to send forces to fight IS in the center and in the east of the country. The regime has repeatedly issued public statements that “every inch of the land must be freed.” However, these statements seem to ignore the developments in Syria over the last six years, including crippled governance, the apparent inability of the central government to control the periphery, the loss of trust among most Sunni citizens and the elimination of a network of agents and informants that somewhat stabilized the system before the war.

The moderate opposition, therefore, is concerned about a possible offensive of the Iranian and Syrian governmental forces in Idlib as soon as it engages in fierce combat against fundamentalist factions. In this scenario, Damascus and Tehran might deftly use divisions among moderate opposition groups likely to occur in a restructuring after their distancing themselves from Jabhat Fatah al-Sham.

A comprehensive cease-fire will allow moderate opposition factions, which do not feel the need to join the ranks of the radical opposition and form a united front against Assad, to upgrade militarily and politically and distance themselves from Jabhat Fatah al-Sham. On Dec. 28, 10 FSA factions (roughly 18,000 soldiers) announced the first real step toward their full integration. At the same time, complex processes are taking place within Ahrar al-Sham. On Dec. 10, the establishment of Jaish al-Ahrar, a new faction within the opposition movement, was proclaimed. The move indicates that Ahrar al-Sham has split into two parts: the one backed by Turkey leaning toward the FSA and the one gravitating toward Jabhat Fatah al-Sham. This could show that rejecting the formula “Moscow’s terrorist is Washington's freedom fighter” is a step in the right direction.

In general, Moscow’s maneuvers in the Syrian swamp seem to reveal its desire to act as a mediator managing the conflict rather than just be a party that, among other things, sustains losses. Hence, it appears to result in the Kremlin's willingness to negotiate with various opposition factions in northwestern Syria.