Victories in the war on the Islamic State are tempered by setbacks that call for a careful examination of how to proceed. 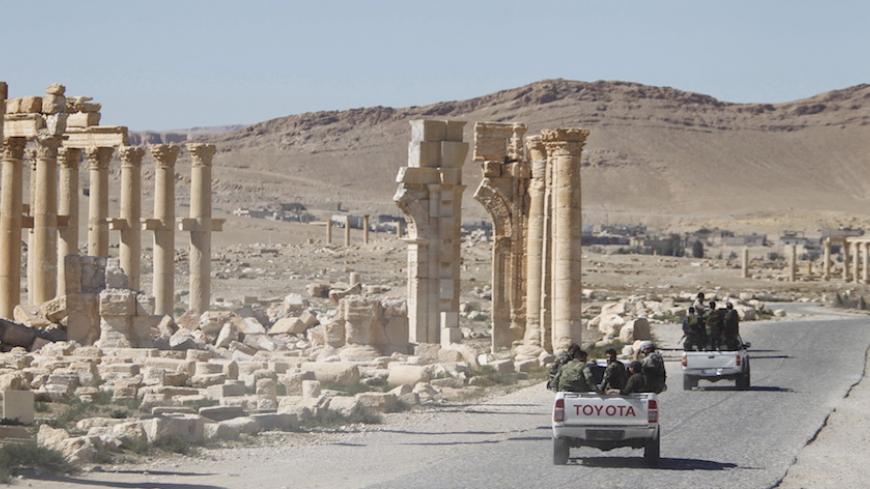 Syrian army soldiers drive past the Arch of Triumph in the historic city of Palmyra, Syria, April 1, 2016. - REUTERS/Omar Sanadiki

In Russia, joy over the progress of Syrian forces in eastern Aleppo eclipsed bitterness over the loss of Palmyra — but only for a few days.

“[The loss] came as a blow to prestige, including our own prestige,” Gen. Yury Baluyevsky, the former head of Russia's general staff, said in a Dec. 11 interview with Interfax. He said he regards the Islamic State's (IS) recent takeover of Palmyra as a mistake in military planning and a failure to track the accumulation of power in the area.

The Russian Defense Ministry said Syrian government forces had to leave Palmyra because they were outnumbered by enemy troops — and the supposed numbers kept growing. On Dec. 11, the military department mentioned 4,000 IS militants, and the next day that figure reached 5,000.

Russian Foreign Minister Sergey Lavrov suggested that the IS offensive on Palmyra and IS fighters fleeing to Syria from the Iraqi assault on Mosul might be part of a strategic plan to relieve the pressure on rebel groups in eastern Aleppo.

In the Russian expert community, the loss of historic Palmyra to IS fighters gave rise to all kinds of conspiracy theories — two prominent ones in particular. According to the first, Americans released militants from Mosul to instigate IS to recapture Palmyra. The second one suggests that the Gulf monarchies financed the attack to distract Syrian government forces from Aleppo. Many Russians believe the situation is politically motivated, which keeps them from fully understanding it, but it fits with Russia's overall relationship with the West.

The theory that ties the IS offensive on Palmyra with the events in eastern Aleppo does not stand up to scrutiny. If that were the case, the attack on Palmyra should have started two weeks earlier. Moreover, the opposition had not recently launched any serious attacks either southwest of Aleppo or in Hama, which enabled the Syrian army and the Shiite militia to concentrate on eastern Aleppo.

As for the Russian Defense Ministry's statement about the number of militants reclaiming Palmyra, even Russian and Syrian pro-governmental reporters doubt the estimates. Their own estimates do not exceed 2,000, and they suggest that even if reinforcements were sent to the province of Homs, they could not have been considerable.

Several factors confirm that there was no large-scale redeployment of terrorist troops to Palmyra. First, in Mosul, the number of IS fighters, excluding tribal militias, still stands at about 5,000, and the hostilities there still continue. Second, IS is defending al-Bab and is continuing to fight with the Syrian Democratic Forces alliance in the provinces of Raqqa, Deir ez-Zor and Hasakah. Third, IS forces are known to be quite independent in their decision-making and usually carry out operations using dozens of mobile forces in relatively small groups of 15-30 militants. That strategy renders enemy airstrikes ineffective. The same tactic was used to recapture Palmyra. IS fighters started the offensive Dec. 8 and gradually advanced to the city outskirts, taking control of oil fields, checkpoints and critical sectors on their way.

The interesting point is that according to Al-Monitor sources, the militants' initial plan was not to retake the city, but to raid the military supply depots. However, despite massive support from the air and the approach of reinforcements, the local forces failed to counteract the highly motivated, well-trained militant troops, who have a good knowledge of the situation on the ground. IS used suicide bombers and struck from several directions at a time. Eventually, on Dec. 11, IS took control of the city. It then moved on to seize the Tiyas air base (T-4) and advanced toward Homs and Qaryatayn, which is 93 kilometers (58 miles) southeast of Homs and 125 kilometers (78 miles) southwest of Palmyra.

What’s more, it is evident that the IS grouping has not increased, otherwise the T-4 air base would have been seized immediately and troops would have advanced more quickly to block major roads connecting Damascus and the southern provinces. The situation with Palmyra has demonstrated that Damascus is becoming more and more dependent on foreign military support, while the pro-Syrian coalition lacks the forces to carry out operations in the west and to maintain control over territories in the center — let alone the east — of the country.

After taking over Aleppo, the regime will have thousands of troops available, but will they move to free Palmyra? Although the city is militarily significant and could be used as a logistics center to advance on Deir ez-Zor, Syrian President Bashar al-Assad has neither the opportunity nor the political will to seriously fight IS in the east. The prospect of recapturing Palmyra has complicated the movement of government forces from Itria to the southern borders of Raqqa to claim part of those territories. Thus, if this movement starts, the rebels could make things difficult.

Also, the Kremlin could try to use the renewed threat in Homs as a reason to expand cooperation with the new US administration. Currently, a new offensive on Palmyra would weaken the front south of Aleppo, which the opposition could use to their advantage. The situation could be improved by the “soft division” of the country, for example, by agreeing on zones with specific lines of fire and a strict demarcation of cease-fire and logistics lines, as it concerns the province of Idlib in northwest Syria and the neighboring areas in Latakia, Hama and Aleppo. As for the southern provinces of Quneitra and Daraa, a cease-fire agreement is already in effect there between the regime and the “south front” coalition of the Free Syrian Army (FSA) groups.

In this context, Damascus, under pressure from Moscow, could form a grouping to advance on IS and continue clearing the opposition enclaves in eastern Ghouta and Ar-Rastan. However, the regime is not demonstrating political flexibility, and some in the Syrian military say Idlib should come after Aleppo. The Provincial Council is currently estimating the local Idlib population at 2.2-2.6 million. The province is self-governed and operates through 144 administrative councils. It is controlled by Jabhat Fatah al-Sham (formerly Jabhat al-Nusra) and Ahrar al-Sham. As a rule, the FSA factions are protected by Ahrar al-Sham. The distinction is not so easily implemented, however, as most moderate and radical groups consist of Syrian Sunnis, whom Damascus is trying to distance itself. According to Assad and Syria’s Grand Mufti Ahmad Badr al-Din, all rebels are terrorists and Wahhabis, while “true Sunnis” are those who have surrendered and support the regime.

Nonetheless, the tendency to differentiate the opposition is already there. The FSA groups form new coalitions even in southern Syria, and the withdrawal of rebels from different enclaves to Idlib increases the percentage of the “moderate” opposition. If Ahrar al-Sham forms a new coalition that unites FSA groups and distances it from Jabhat Fatah al-Sham, international players are likely to acknowledge it as the new “law-enforcement power” — all the more so as the troops of Ahrar al-Sham and other “moderate” groupings together with the Turkish army are actively fighting against IS in the area of al-Bab.

The realization of such scenarios could help get a political settlement of the Syrian situation underway. However, random bombings of Idlib and clashes with the opposition are, on the one hand, likely to weaken Assad forces and further drag Russia into the conflict. On the other hand, those actions may contribute to “moderate” opposition forces merging with terrorists and the radicalization of the Sunni population. What is more, bombing will hardly recruit new forces for the fight against IS, which has not only been successful in holding the line in Iraq and Syria, but has also proved capable of mounting counterattacks elsewhere.