Russia's efforts toward the reconstruction of Syria are hindered by the inherent challenges in the territorial fragmentation of the country. 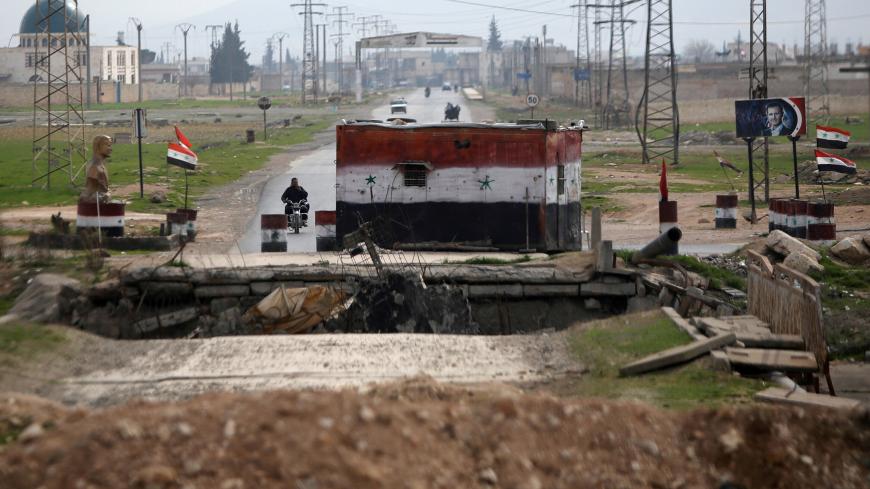 The Syrian army's Operation Dawn of Idlib seems to be a step toward the fulfillment of a promise Bashar al-Assad made in February 2019 to "liberate every inch of the country." The military operation, supported by Russia, is ongoing in northwest Hama and southern Idlib.

Supported by its Russian and Iranian allies, the Syrian army achieved some impressive victories on the ground over 2016-2019 in the following areas: northwest-Latakia province; Aleppo, Syria’s commercial capital; Hama and Homs in central Syria; Daraa and Quneitra in the south; the Syrian Desert, or Badia; Damascus and its rural areas; and some areas in Raqqa and Deir ez-Zor. Yet Syria has not overcome the threat of territorial partition or witnessed the restoration of national sovereignty to all its lands.

This partition of territory and populations has led to a disruption of socioeconomic life, visibly reflected in the sectors of mineral resources, agriculture and transportation.

In 2017, the SDF took over Syria's northeast and much of the east, which are home to up to 95% of Syria’s oil reserves (2.5 billion barrels). SDF’s gains included al-Omar, the largest oil field near Deir ez-Zor, and the Conoco gas plant, the largest in the country. Damascus experienced fewer losses in natural gas, with reserves estimated at 8.5 trillion cubic feet, despite the total gas production declining from 307.24 billion cubic feet in 2011 to 201.29 billion cubic feet in 2015. In 2016-2017, the Syrian army seized 55% of the country's gas fields, including Shaer, Hayyan and al-Mahr in Homs province.

The division of control between Damascus and the Kurds also reverberates in the infrastructure. The General Petroleum Line is split roughly 50-50 between the SDF and Syrian government. The pipeline links the Karatchok oil field in Rmelan, Hasakah, to the Syrian port of Tartus and the Lebanese port of Tripoli.

Damascus never lost control on the country’s only petroleum-loading seaport terminal in Baniyas. The government operates the South Middle Area gas plant in Homs, the major supplier for the Damascus area. The North Middle Area gas plant, constructed in the Tabqa area in Raqqa province, to cover needs of Aleppo, operated under the Islamic State from 2014-2017. At the time, the West alleged that the plant's products were being smuggled into government-run territories.

The Syrian army seized all three pumping stations on the Kirkuk-Baniyas pipeline, which goes from Iraq to the Syrian coast. The most important pumping station is the T2 in Deir ez-Zor province (connected with T1 in Iraq and with the local al-Thayyem oil field, recaptured by the Syrian army in 2017), as well as T3 and T4 in Homs province.

In 2016, Iranian militias expelled the Islamic State from Khunayfis and al-Sharqiya, home to the country’s two deposits of phosphates, located around Palmyra. Later, an alleged Russian-Iranian gentlemen’s accord enabled the Syrian government to strike a 50-year product-sharing agreement with the Russian company Stroytransgaz for the extraction of phosphates. The SDF got ahead of the Syrian army in seizing the country’s largest freshwater reservoirs, fed by the Euphrates. In particular, the SDF controls Lake Assad in Raqqa province, which supplies Aleppo with most of its potable water.

Yet Syria's north and northeast comprise more than half of its cropland. The areas include the northern Syria belt, Idlib, Kurdish-ruled areas of Jazira (known as the Syrian wheat basket), and cultivated land along the Euphrates, irrigated by Tabqa Dam. The loss of government control in these areas undermines the government's ability to ensure sustainable development, not to mention food security and independence.

Damascus continues to suffer from the disruption of transportation links and a lack of access to borders. On a more reassuring note, the government maintained control over all its seaports of Latakia, Baniyas and Tartus, as well as the airports of Damascus, Latakia, Qamishli (a government-held enclave in the SDF-run Hasakah province), now supplemented by the Aleppo airport.

On a less optimistic note, however, intensive warfare paralyzed domestic ground routes, along with Transport International Routiers arteries with Iraq, Turkey and Jordan. Limited access to the borders led to a serious decline in customs revenue. As of May 1, 2019, Damascus controlled two of a total 20 crossings with Turkey — one of them, Kasab, now operates in a restricted mode. The Free Syrian Army controlled six; the Kurds, five; and Hayat Tahrir al-Sham, three. Only three crossings were fully operational — including the most important crossing of Bab al-Hawa, between Idlib and Turkey’s Hatay province — and all of them were out of Damascus’ reach.

Among the border crossings with Iraq, the SDF controls al-Yarubiya and pro-US militants control Tanf. The fate of the third crossing — Abu Kamal, dominated by the Iranians since 2017 — is unclear due to US opposition to Tehran’s plans to build a “land bridge” to Lebanon and the Mediterranean.

The reopening of the Nassib crossing with Jordan in 2018 was a positive sign in terms of Syria’s own trade, as well as Lebanon’s trade transit to the Gulf. The Daraa crossing is used for UN-led aid efforts under the Whole of Syria approach. In turn, Syria and Jordan have discussed opening one more crossing with a view to expanding cross-border trade with Iraq.

Wartime Syria was home to a few parallel economies that emerged within territories controlled by the Islamic State, Jabhat al-Nusra, the Kurds and Turkey. After the collapse of the economy of the Islamic State — which was named the richest terrorist organization — Damascus still faces a "quasi-economy" in Idlib operated first by Jabhat al-Nusra and then Hayat Tahrir al-Sham. This weaker economy has a focus on agriculture and it is adjoined by a Turkish-linked agricultural quasi-economy in the northern Syrian security belt. Local Arabs and Turkmens receive humanitarian aid from Turkey and use the Turkish lira in parallel with the Syrian pound.

Another economy emerged in the Kurdish-run territories, which were less damaged compared to the rest of Syria. Based on some oil revenues and attempts to revive agro-exports like wheat, olive oil, cotton and sheep, the Kurdish economy has been guided by populist slogans of blending cooperative and private sectors. The Syrian pound remains in use. The opening of a border crossing with Iraqi Kurdistan in 2016 boosted economic activity.

In sum, the partition of Syria determines the different outside approaches to the country’s reconstruction. Turkey, for instance, is concentrating on the northern Syrian security belt zone, as companies like Turk Telecom and PTT — the Turkish post office — are involved in local projects. Meanwhile, Afrin's recreational tourism industry is slowly coming to life.

US strategists advocate the Kurdish-oriented "go local," "go small" and "go slow" approach, meaning, bypass Damascus. Experts speculate that this approach coincides with Washington's plans to unite Syrian Kurds and Iraq into one state, a "Sunnistan," and dominate their mineral, water and agricultural resources, with the financial help of the Arab Gulf states.

The UN and the EU, in turn, view Syria’s reconstruction through the lens of early recovery and humanitarian aid, based on the Whole of Syria approach. Iran, meanwhile, is trying to convert its military presence in central and eastern Syria into long-term economic dominance. Russia is seeking ways to rebuild the disrupted economic ties between Damascus and Syrian Kurds in the energy sector on the basis of mutually beneficial compromises.