Russian forces intensified their airstrikes against IS sites in Syria’s Badia with the aim of supporting the ground forces that failed to eliminate the organization or curb its spread. 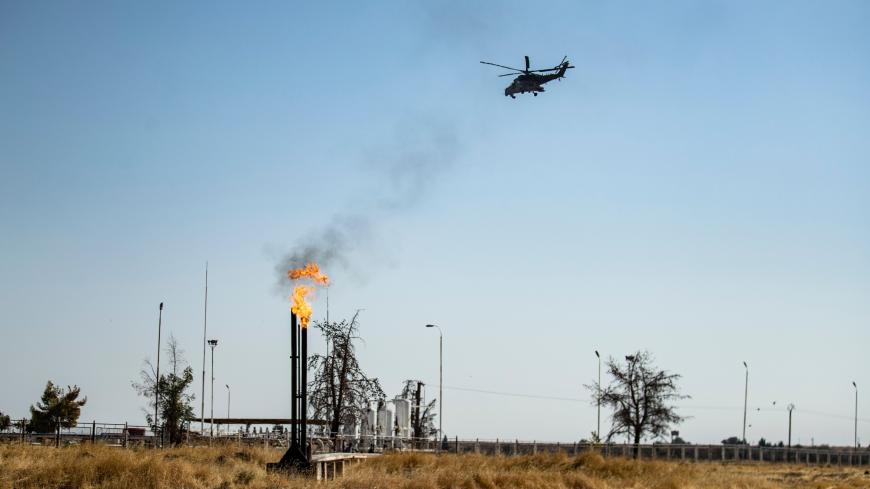 A Russian army helicopter, part of a patrol, flies over an oil field in the countryside of al-Qahtaniyah town in Syria's northeastern Hasakah province near the Turkish border, on Oct. 11, 2020. - DELIL SOULEIMAN/AFP via Getty Images

ALEPPO, Syria — During the second week of March, Russian warplanes intensified airstrikes targeting the Islamic State (IS) in eastern Syria.

There are several goals behind the Russian airstrikes. Chief among them is securing the roads in the Badia region (the Syrian desert), limiting IS operations and military capabilities and curbing the spread of the organization in the Badia, which extends over Raqqa, Hama, Homs, Deir Ez-Zor and Aleppo provinces.

The Syrian regime forces and their allied militias have failed to achieve their goals during their ground operations against IS in recent months.

In order to intensify air operations against IS in the desert, the Russian forces have beefed up their presence in two air bases belonging to the Syrian regime in the Badia in the eastern countryside of Homs in order to use these bases as a launching pad for the aircraft striking IS positions and sites in the area.

A journalist and activist in the eastern countryside of Hama told Al-Monitor on condition of anonymity, “The ground military operations waged by the regime forces against IS in the Syrian Badia have failed to weaken the organization, as its militants are still roaming the region while attacking roads and launching almost daily attacks against the regime’s sites and oil and phosphate fields.”

“This IS activity shows that the organization is still maintaining a large part of its military and human capabilities, and it is following developed offensive tactics to deplete its opponents and minimize its losses,” he added.

The intense Russian air campaign against IS marks the beginning of a new phase of confrontations in the Badia. There are questions as to whether this campaign will help the ground forces fighting IS and whether it can limit IS movement and operations all the while weakening IS military and human capabilities. Questions also arise about Russia’s benefit from this air campaign.

Mustafa Bakour, a defected Syrian military officer and military analyst who lives in Syria’s northwestern province of Idlib, told Al-Monitor, “IS members have gained great experience when it comes to hiding and moving in the Badia, which has a rugged nature full of hills and natural hideouts, and this is what made it easy for them to carry out operations against the regime and its allies, during which hundreds were killed. The intense Russian air campaign against IS primarily aims at minimizing the human losses suffered by the regime and the militias supporting it.”

“Due to the state of attrition that these forces are experiencing, Russia has resorted to its air force in the hopes of [supporting] the drained ground forces. The aircraft possesses a massive destructive power, but it cannot control the land. Ground forces are subsequently indispensable to impose control on the ground following airstrikes. This is what Russia successfully did during the regime’s war against the Free Syrian Army in Idlib. However, I do not think that this will work out in the Badia, which extends over a large area and where IS has several hideouts. The organization also adopts a guerrilla tactic and relies on attacking its targets and subsequently withdrawing and hiding,” Bakour said.

Abbas Sharifeh, a researcher at the Jusoor Center for Studies based in Istanbul, told Al-Monitor, “The ground military campaign that the regime forces launched with the support of Russian forces against IS cells in the Badia has failed for many reasons. IS’ strategy is based on rapid raiding, ambushing and destabilizing [the enemy] to avoid turning into an easy prey. I do not think that the Russian air force alone is capable of eliminating the organization. It may, however, temporarily weaken it and limit its operations, but these could resume once airstrikes are halted.”

Airstrikes are a costly military action. Countries resort to them either in cases of extreme necessity or when there are potential gains justifying them. And since most of the Russian raids have recently focused on a wide area of the Badia, the question arises as to what Russia is counting on and whether there are real gains to cover the costs of these raids.

An independent political economy researcher, Yahya al-Sayed Omar, told Al-Monitor, “There are many reasons that make Syria’s Badia very important economically. It is located in the middle of Syria, and it includes the roads linking the east and the west of the country. Also, the regime is seeking to activate the trade line with Iraq, hence the need to fully secure this road.”

Al-Watan paper, which is close to the regime, reported in a March 7 report on the volume of trade between Syrian and Lebanon and between Syria and Iraq via the Abu Kamal border crossing. The director of the Abu Kamal crossing, Assem Iskandar, told Al-Watan that around 25 trucks carrying local goods cross into Iraq on average daily.

According to sources quoted by the paper in January, the total revenues of the Abu Kamal crossing in 2020 reached about 800 million Syrian pounds (about $276,000).

Omar said, “Russia has seized several vital facilities in Syria, some of which are located in the Badia, such as the Shaer oil field, the Hayyan gas plant and the Khunayfis mining area, and any IS attack on these facilities will disrupt operations and cause Russia to lose its investments.”

He said, “Russia is trying to take control of the Syrian oil sector. Those in the know on the locations of the Syrian oil fields know full well that some important fields are located in the areas where Russia is launching airstrikes. The Wadi al-Ubaid field, located between the provinces of Deir Ez-Zor and Raqqa, is one of the important fields and the presence of IS in its surroundings makes it very risky to invest in this field. Russian raids also targeted Jabal al-Bishri in western Deir ez-Zor, knowing that this mountain is the main stronghold of IS remnants hiding in the many caves it contains. Jabal al-Bishri is rich in natural resources, as it has sand and marble quarries, asphalt and salt mines, and it is also believed to contain shale oil mines.”