Syrian forces crack down on Islamic State in Syrian desert

The Syrian government forces are waging a revenge war against the Islamic State in the Syrian desert amid escalating attacks. 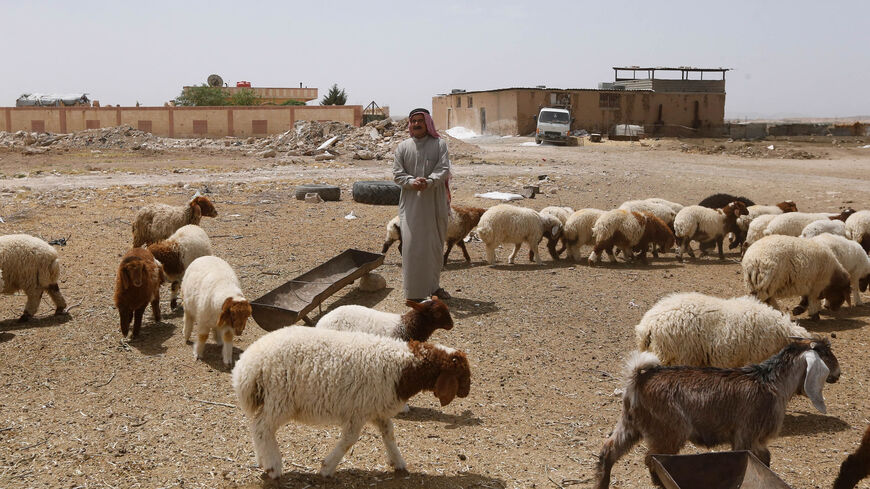 Abu Mari, a Syrian Bedouin livestock farmer who raises camels, goats and sheep, tends his flock in the village of Ghezlaniah, in the countryside of the Badia region, southeast of Damascus, Syria, April 20, 2021. - Louai Beshara/AFP via Getty Images

ALEPPO, Syria — The Syrian desert known as the Badia region has been recently witnessing violent battles between the Syrian government forces and Islamic State (IS) militants, while Russian warplanes are raiding the group’s hideouts and military vehicles in the main clash area of Jebel Bishri, which extends over large areas south of Deir ez-Zor and Raqqa provinces in the east of the country.

Jebel Bishri in the Badia region is the same area where the government forces lost dozens of their members in separate attacks carried out by IS fighters during the past few weeks. On June 21, IS attacked the government's military barracks in Jebel Bishri, south of Raqqa province, killing and wounding several soldiers.

A day early, on June 20, the group launched one of the deadliest attacks against government forces in the area. Syria’s state news agency SANA quoted a military source as saying, “At around 6:30 this morning, a civilian passenger bus was subjected to a terrorist attack on the Raqqa-Homs road in al-Jira area, which led to the death of 11 soldiers and two civilians, while three soldiers were injured.”

IS claimed responsibility for the attack on the same day.

The government’s military campaign, backed by Russian air cover, comes after the government’s repeated failed attempts to prevent IS attacks in the area since the beginning of 2022. This time, the government seems to be waging a revenge war in retaliation for all the heavy losses it incurred in Badia throughout June.

A media source close to the government forces told Al-Monitor on condition of anonymity, “In June, IS carried out over 20 operations in the Syrian desert against the Syrian army and allied forces. The bulk of the group’s attacks targeted military sites and military and civilian vehicles on roads leading to Raqqa, Homs, Hama and Deir ez-Zor.”

He added, “The bus that was targeted [on June 20] was carrying fighters from the 17th Reserve Division and the Fifth Corps. There were no civilians on the bus, unlike what some outlets reported. These fighters were on their way to join their military barracks in the desert and the bus was traveling on a military road we call the Ramle-Bir Joum road, which the forces use to transport soldiers and supplies.”

The source explained, “IS is focusing on Jebel Bishri for several reasons, the most important of which is that it is a rugged area in the middle of the Syrian Badia. It is part of the Palmyra mountain chain; it starts from the Sukhna area, northeast of Homs, and extends to the southern countryside of Raqqa and Deir ez-Zor. It thus provides great hideout spots for IS. I would not be exaggerating when I say that IS has hundreds of underground bunkers in ​​Jebel Bishri, keeping its members safe and enabling them to set up ambushes and immediately return to their hideouts after carrying out their attacks. IS uses motorbikes a lot, which makes it easier for its fighters to carry out sudden attacks and quickly withdraw.”

A military official in a tribal militia allied with the government forces in the desert in the south of Raqqa province told Al-Monitor on condition of anonymity, “We are carrying on with this crackdown on IS in Jebel Bishri alongside the daily aerial bombardment by Russian planes. IS has incurred great losses recently; we have so far killed over 20 members and destroyed [several of] their motorbikes and military vehicles.”

He said, “I believe eliminating IS from Jebel Bishri is not an easy task. It requires an organized military campaign and huge forces to swoop the area so that we do not end up with another failed mission.”

The local Al-Khabour website reported June 23, “The regime forces have mobilized military formations from the 17th [Reserve] Division, the 25th [Special Mission Forces] Division and the Fifth Corps in the Rusafa desert area in Raqqa countryside, with the aim of launching a broad sweep campaign in the Raqqa desert under Russian supervision and support.”

Jihad Barakat, leader of the Baath Brigades affiliated with the government forces, said in a tweet June 24, “Units of the Syrian army — with the support of the Syrian-Russian warplanes — began combing operations in Jebel Bishri, from which IS terrorists are fleeing.”

Throughout June, Jebel Bishri became a black hole where government soldiers and allied militias have been repeatedly targeted by IS, while many are now afraid to participate in the battles against the radical group, which takes advantage of the nature of the terrain to launch its attacks and preserve its survival in the Syrian Badia.