The Islamic State has recently intensified its attacks against regime forces and their allied militias in the Syrian desert, in what seems to be revenge for the killing of their leader in northeast Syria in February. 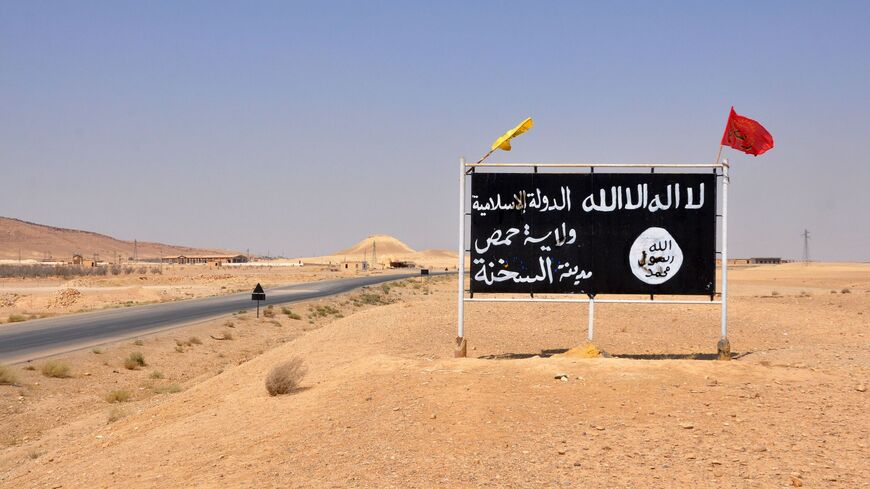 A general view taken on Aug. 13, 2017, shows an Islamic State poster in the central Syrian town of Al-Sukhnah as pro-government fighters clear the area after taking control of the city situated in the county's large desert area called the Badiya. - STRINGER/AFP via Getty Images

ALEPPO — The Islamic State (IS) organization has since early April escalated its attacks against Syrian government forces and allied militias in the Syrian desert area known as the Badiya. In parallel, Russian air raids targeting IS hideouts and outposts in the Badiya area have also increased, with government forces and their militias sending military reinforcements in preparation for a military operation against IS.

IS’ recent attacks are unprecedented. It targeted military barracks, oil fields and huge Syrian military convoys. It used various weapons, including medium- and short-range missiles, which means that it now possesses a diverse arsenal of weapons and follows new tactics that have confused government forces and inflicted heavy losses among its ranks.

Aahed Muhammad, a journalist based in Deir ez-Zor in eastern Syria, told Al-Monitor that the most recent attack on April 13 by IS targeted military positions of government forces and allied Iranian militias in the desert in Homs.

Earlier, the organization launched attacks against government forces in the Deir ez-Zor, Raqqa and Homs provinces. The oil fields that IS targeted in April include al-Kharata oil field in the southwest of the Deir ez-Zor province, Muhammad added.

Meanwhile, IS circulated in mid-April recently taken photos depicting how IS fighters are spending the Muslim holy month of Ramadan in the Badiya. The photos showed that the fighters live in caves and use motorcycles to move across the Badiya area. Their food mostly includes meat, which they usually obtain from looting Bedouin herders in the desert.

Speaking on condition of anonymity, a local source close to the government forces in the Rusafa area, which is part of the Syrian Badiya and is located in southern Raqqa province, told Al-Monitor, “IS attacks in the Badiya have not stopped. But since early April, the attacks have escalated, focusing on oil fields run by companies close to the regime, such as the Arvada Petroleum Company owned by a businessman close to the regime, Hussam al-Qatirji. The recent attacks by IS showed that they own various types of weapons that they did not have last year, such as Grad rockets and mortars.”

The source added, “The military operations carried out by the regime forces against IS did not stop. Occasionally, the forces leading the fighting against IS in the Badiya area, which stretches from Raqqa, Deir ez-Zor to Homs, are replaced by other forces. These mainly include the Russian-backed Liwa al-Quds, which are widely deployed in the area and are now preparing for a large ground operation against IS in the desert in light of the escalating attacks. The operation will be launched jointly with the National Defense Forces, an auxiliary to the Syrian armed forces, and also in cooperation with the Iran-backed military units such as the Baqir Brigade.”

Commenting on the reasons why IS escalated its attacks recently using new tactics, Gaziantep-based researcher at the Jusoor Center for Studies Anas Shawakh told Al-Monitor, “IS’ escalated attacks can be seen as a revenge for the killing of its former leader, Abdullah Qaradash (Abu Ibrahim al-Hashimi al-Qurayshi). These attacks carry messages that IS is still strong and has boosted its military capabilities to hit major targets under the leadership of its new commander, Abu al-Hassan al-Hashimi al-Qurayshi.”

Shawakh added, “IS’ attacks against oil fields aim to put pressure on the operators of these sites, such as the companies run by Qatirji, which would have to pay a financial sum to the organization to have it halt its attacks and be able to carry on with their business. This will help to increase IS’ revenues collected from taxes.”

On March 22, government-affiliated Liwa al-Quds said that its fighters found an oil well that IS was running in Qom in Syria’s Badiya.

Shawakh said, “IS’ increasing attacks and successful tactics in the Badiya area could be linked to the jailbreak of prominent IS leaders and members from a [Kurdish-run] prison in Hasakah's Ghweiran neighborhood in early 2022. Those who broke out of the prison are believed to have found refuge in the Syrian Badiya, considering that they have ample space to maneuver and conceal there. They also have high security and military experience as former IS members, and their arrival may have helped the organization implement the new tactics.”

He continued, “IS members who are stationed in the pockets of the Badiya never lacked weapons and always had the financial means to buy new weapons, including missiles, from smugglers on the black market and from the corrupt [members] of the regime forces who sell weapons through brokers affiliated with IS. These corrupt individuals are lured by the large sums that IS pays them. Also, IS seizes the weapons it finds in the regime military barracks that it attacks in the desert.”

Despite IS’ ongoing operations against the Syrian government forces in the Badiya area, the countermilitary operations backed by Russia and Iran do not seem serious so far. Shawakh believes that “the regime and its allies are not willing to end IS’ presence in the Badiya. This seems clear by the way the Russian side is dealing with IS by focusing on the military aspect to fight the organization instead of the security aspect on which IS’ survival depends.”