The Islamic State continues to cause trouble for the regime forces in large desert areas of central and eastern Syria. 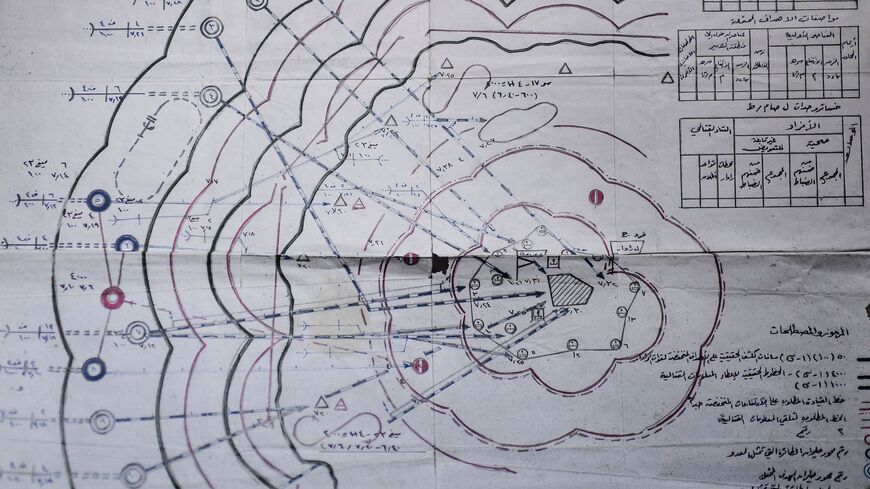 A battle map of Syria is pictured at the archive of the nongovernmental Commission for International Justice and Accountability in an undisclosed location on February 10, 2021. - AFP via Getty Images

The Syrian Observatory for Human Rights reported on March 31 that six Russian fighter jets launched 15 airstrikes against Islamic State positions in the Syrian desert near the Aleppo-Hama-Raqqa triangle.

The UK-based war monitor said that the Syrian government sent military reinforcements to the eastern desert in al-Mayadeen city to comb the region for IS cells.

On March 23, IS militants attacked the positions of Syrian government forces and allied militias near al-Shula, west of Deir ez-Zor and near the Deir ez-Zor-Damascus road. The attack killed seven militants loyal to the government and injured several others before Syrian warplanes targeted the area, pushing IS operatives into the desert.

The Syrian Observatory for Human Rights quoted sources from the Tishreen Military Hospital in northeastern Damascus as saying that around 100 Syrian army soldiers and their allied fighters were admitted to the hospital on March 27, 28 and 29. They had sustained various injuries in ambushes and from land mines planted by IS while searching the desert from the area of al-Sukhnah to Palmyra in the eastern countryside of Homs. Many of the injured had first-degree burns and others lost limbs.

Abbas Sharifeh, a researcher on jihadist groups at the Jusoor Center for Studies based in Istanbul, told Al-Monitor, “There are several reasons for the failure of the regime's military campaigns against IS. They include the expansion of the geographical area in which IS moves in the desert region, which the regime lacks the ability to cover militarily.”

Sharifeh said that at this point, IS is no longer seeking control and expansion but relying on raids, ambushes and easy targets while avoiding direct confrontations with the Syrian army. “IS is focusing on collecting spoils to fund itself,” he added.

Sharifeh explained that IS is benefiting from the chaos of regional and international conflicts in Syria, in particular the Russian-Turkish-American competition that deprioritized the fight against IS as well as "the absence of a political solution, the Iranian presence and the US support for a separatist project represented by its support to the [Kurdish-led] Syrian Democratic Forces.”

Sharifeh said all these factors gave IS leverage over its opponents “while the Syrian people are missing from the equation. The SDF, the regime and Iranian militias are using the war on terror for political leverage," justifying its presence and legitimacy before the international community.

“IS is still recruiting from the local population, though their numbers remain low. Meanwhile, the regime is trying to exploit IS’ presence to portray itself as being engaged alongside the international community in fighting the terror group,” he added.

Sharifeh warned that IS, despite its apparent latency, may produce another wave of attacks. “But this time, it will not be attacking with the aim to take control of cities," he said, adding that it will increase its training and weapons-procurement activities.

Hamam Issa, a journalist in Idlib covering IS’ activities, told Al-Monitor, “The organization was able to survive the regime's military campaigns due to the ruggedness of the desert region, where mountains and valleys help it hide and maneuver. … The Syrian desert in Deir ez-Zor province provides a safe haven for IS fighters who have established relations with smuggling networks operating across the Iraqi border.”

He added, “IS has moved from conventional war to guerrilla warfare to survive for as long as possible. Groups of IS fighters ride motorcycles and use light weapons to carry out ambushes and raids on the regime convoys and block the roads used by [President Bashar] al-Assad's forces and allies. The guerrilla tactics used by IS fighters in the desert allow IS to keep control for longer periods, as small groups are not affected by airstrikes due to their quick movement.”

Issa continued, “IS has separate pockets in the Deir ez-Zor desert, most notably in Kobajjep. It is also active in the southeastern Raqqa desert up to Mount Bishri near the borders with Deir ez-Zor. IS also operates in the Sukhna desert, the desert east of Palmyra in the eastern countryside of Homs, the desert area south of Palmyra up to the outskirts of the eastern Qalamoun mountains and the eastern Hama countryside. All these areas are rugged, which makes them a suitable environment for IS guerilla war maneuvers.”