The Islamic State organization (IS) kills a large number of regime forces on an almost daily basis in the Syrian Desert, which has turned into a black hole draining the regime forces. 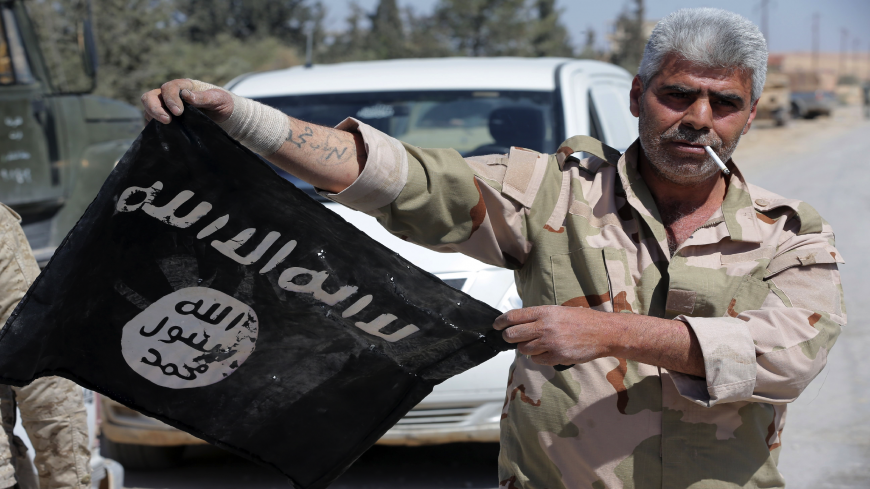 A Syrian soldier displays on April 4, 2016, an Islamic State (IS) group flag after Syrian troops regained control the previous day of al-Qaryatain, a town in the province of Homs in central Syria. IS jihadists withdrew from the town a week after the Russian-backed army and allied militia scored a major victory in the ancient city of Palmyra, which is also located in the vast province of Homs. The recapture of al-Qaryatain allows the army to secure its grip over Palmyra, where jihadists destroyed ancient temples during their 10-month rule and executed 280 people. - JOSEPH EID/AFP via Getty Images)

IDLIB — The Syrian Observatory for Human Rights (SOHR) wrote on Facebook Jan. 29 that the Islamic State organization (IS) escalated activities in January within the Aleppo-Hama-Raqqa triangle, in addition to the desert area of Homs and Deir ez-Zor. Military operations are conducted on a daily basis in this area as part of the Syrian regime's and Russia's attempts to stop IS activities.

According to SOHR statistics, IS killed 153 members of the regime forces and pro-regime militias in January in the Syrian Desert, out of which 70 members were killed in five IS ambushes. The rest were targeted in clashes, roadside bombs or landmines. In contrast, 81 IS militants were killed in Russian airstrikes and clashes with the regime forces and pro-regime militias.

The escalation continued in February, with IS killing 19 members of the regime forces and pro-regime militias Feb. 3 in an offensive in the Ithriyah-Sukhna axis in the Syrian Desert. That is the harbinger of a new escalation in the area.

A few days ago, Assad's forces announced a "sweeping campaign" in the Deir ez-Zor, Homs and Hama governorates. The operation aims to secure the highway that links Damascus to Deir ez-Zor. This comes after IS resumed activities, carrying out a series of attacks against the Assad regime and pro-regime militia positions. Seventeen members of Liwa al-Quds and the 17th Reserve Division were killed in the latest IS offensive, which followed another attack killing 12 members of Liwa al-Baqir in the same area.

In this vein, Capt. Abdulslam Abdulrzaq, a military analyst based in Idlib, told Al-Monitor, “IS has reorganized its ranks in the desert area, taking advantage of the vast and empty space to resume activity. It banks on communications amongst its groups, which consist of small and fast-moving units that excel in maneuvering and master setting up ambushes and carrying out swift and precise swoopings on their targets. The regime forces and Iranian militias are not well trained, given the regime’s constant need for fighters. In this case, organizing training is deemed unsuitable, because the regime does not have the time for it. After each strike and after targeting the regime, IS’s strength grows bigger, particularly since it seizes weapons and ammunition.”

Speaking to Al-Monitor, Abu Hafs al-Shami, a pseudonym of a jihadist commander based in Idlib, said, “The reason why IS spreads out continuously is that it opts for the right geographical environment to operate and moves in small groups that carry light and easy to use weapons. It carries on with the same strategy it adopted before 2010 when it was in Iraq. The strategy relies on swift actions involving speed, maneuvering, and flexible concealment and withdrawal tactics. In general, the way IS operates is similar to a guerilla war that consists of a war of attrition in the long run — without, however, seeking to make quick gains. That’s its main strategy. This strategy was changed when IS proclaimed the Islamic State of Iraq and the Levant (in 2013), as it was no longer possible to shift to phase two of the guerrilla war. Yet IS obviously moved immediately to phase three (seizing cities in 2014). That was the reason behind the flaw in its tactic, which was reflected in its apparent presence.”

He added, “There are two reasons behind the heavy losses IS inflicts on the regime forces. Firstly is that IS fighters are well-experienced. Secondly is that the regime had initially dispatched unprepared units for this type of war, namely guerilla [warfare]. Ostensibly, the regime soldiers underwent quick and classic training courses that their units usually take. This is why there is a Russian interest in improving the training for these units. I do not see that IS is growing again, and it is too soon to speak of genuine and effective outcomes that would have a dangerous impact on the Syrian regime. Yet [if] IS continues at the same pace and the Syrian regime continues to overlook the importance of IS acts, one would anticipate that IS would increasingly grow.”

Suhaib al-Jaber, a journalist for the Euphrates Post network and who is based in Turkey, told Al-Monitor, “IS has not changed its strategy much. It has only intensified attacks lately after a period of stagnation (in the summer of 2019 and winter of 2020). This period has boosted its capabilities with the training, support and ammunition received. This period also allowed IS to regroup its ranks. Yet IS still relies on the surprise attacks and then on concealing in the desert, which is hard to put under control even through airstrikes. The movements of the Iranian militias and regime forces in their fight against IS in the desert area have unveiled the regime’s positions and turned its members into easy prey for IS units that are called the lone wolves (in reference to the swiftness in conducting operations in small groups). IS focused its attacks on parts of eastern Syria and western Iraq, stretching along the cities surrounded by (the Abu Kamal, Sukhna, Kobajjeb and Palmyra) desert areas.”

Speaking to Al-Monitor, Hammam Issa, a journalist based in Idlib, said, “The city of al-Sukhna, which is considered the second city in the Syrian Desert after Palmyra and which is administratively part of Homs governorate, has turned over the past months into a place where IS focused activities and operations in the desert area. In the past months as well, IS protected itself in a pocket stretching between the Homs and Deir ez-Zor governorates, from the outskirts of al-Sukhna to the borders of al-Bukamal and al-Mayadin in Deir ez-Zor. It uses these parts as small and scattered pockets. IS operations consist of swift attacks against the regime forces. This area serves now as a cornerstone for any IS expansion to northeastern Syria in the future, as IS strived to speed up the pace of its strategy, which consists of imposing shadow control in the nearly 80,000-square-kilometer desert.”