Hardly a day passes without the Islamic State carrying out an attack against government forces and their allied militias in the Syrian desert. 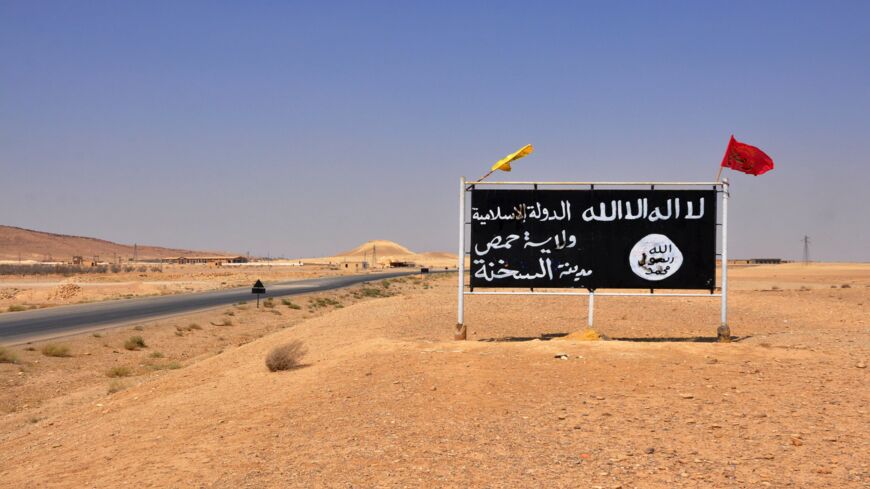 A general view taken on August 13, 2017, shows an Islamic State group poster in the central Syrian town of Al-Sukhnah, as pro-government fighters clear the area after taking control of the city situated in the county's large desert area called the Badiya. - STRINGER/AFP via Getty Images

Despite the announcement of the defeat of the Islamic State (IS), and despite the numerous campaigns launched by all parties in Syria against it, the terrorist group still poses a threat.

At the field level, it seems IS cells resumed their activities in the Syrian desert, known as Badiya. Military operations have intensified to the point that hardly a day passes without IS carrying out an explosion, ambush, assassination or attack in separate areas of the Badiya, which extends over Raqqa, Hama, Homs, Deir ez-Zor and all the way to Suwayda.

These terrorist operations include targeting security and military personnel from the government forces, Iranian militias and Russian forces. Despite the numerous campaigns launched by the various parties in Syria against IS, its power of offense remains unhinged, which indicates that it has regained its ability to make a strong comeback.

Local websites reported that the government forces had attended the funeral of three members, including an officer with the rank of captain, who were killed on June 6 by an IS mine as they were riding a vehicle on a dirt road linking the city of al-Sukhna and Athreya in the eastern desert of Homs.

On June 3, a brigadier general with the Syrian government army was killed in clashes with IS in al-Sukhna, east of Homs in the Syrian desert.

On the same day, IS also attacked sites belonging to the Qatirji group, which is close to the government, in the Qadisiyah desert east of Raqqa. Three members were killed and many others were wounded.

Media outlets reported on June 2 that a military adviser in the Islamic Revolutionary Guard Corps and his companions were killed in an ambush by IS on the road between the cities of Deir ez-Zor and Palmyra in the countryside of Homs. This was preceded on June 1 by the killing of three members of the pro-government militia Liwa al-Quds and the capture of another member in an attack by IS fighters on the headquarters and checkpoints of Iranian militias in the Sukhna desert.

The group went missing on May 27 and the bodies were found on May 29. The media announced this on May 30.

Local media reported on May 30 that a group affiliated with the Syrian government, consisting of 30 members, went missing on May 27 in the Palmyra desert in the eastern countryside of Homs. Two days later on May 29, the bodies of 13 members of this group were found dumped near the Arak oil field in the eastern countryside of Homs. The rest of the group's members are still missing.

On May 17, a convoy of seven military vehicles carrying about 40 members of an Iranian militia was attacked. Five members of the convoy were killed, others were injured and three are still missing.

These attacks brought the death toll as of March 23, 2019, to 1,458 dead from among the government forces and militiamen loyal to them, including at least two Russians, and 152 fighters loyal to Iran, according to the statistics of the Syrian Observatory for Human Rights.

In this context, Abbas Sharifa, an expert in the affairs of jihadist groups and a researcher at the Jusoor Center for Studies in Istanbul, told Al-Monitor, “The Syrian desert has turned into a black hole that swallows the convoys of the Syrian regime, Iran and Russia’s forces. This is despite all the military operations they waged against IS cells and despite IS’ loss of a large number of its members and part of its equipment, supply methods and hideouts.”

He explained, “These cells were able to overcome their stage of exhaustion and regain the element of surprise to launch attacks. They also benefited from the nature of the vast Badiya region and its mountains, valleys and numerous caves. The cells gained full knowledge of the details of the Badiya terrain, roads and places of shelter. They resort to the raid strategy, which consists of moving in small groups and using light weapons, to strike and withdraw immediately. As for their tactics, they plant mines around the vital sites of the regime, such as oil wells, phosphate deposits, military sites and fixed posts, and the main camps that include supply and transport bases. This rendered unsafe the roads used for supply and logistics on the outskirts of the cities controlled by the regime and its allied forces.”

Sharifa continued, “It seems that the attacks launched by IS cells will continue amid the weakness of the regime’s forces and the lack of seriousness in Russia’s use of smart weapons, such as drones, which is one of the most important weapons capable of eliminating IS cells.”

However, he argued that IS cells will not be able to regain their full strength and take control of any specific area. “These cells lack funding and armament and have a shortage in human capital. This is because of the transformations the group witnessed in its organizational structure and method of work. These transformations will eventually cause IS’ own demise and fragment it into dispersed gangs that will collapse one after the other.”

For his part, Abdulaziz al-Khalifa, a journalist with Baladi news network, told Al-Monitor, “IS’ movements depend on the network of tunnels it dug in the area. This makes it difficult to track its movements. IS is also betting on the conflict of interests between Iranian and Russian forces deployed in the area to fight IS. These forces did not coordinate when pulling out some troops. This allowed IS cells to retreat or strike the [remaining] forces. [IS] has also taken advantage of the fact that some factions, such as the Russian-backed Eighth Brigade, refused to take part in the operations [against IS].”

He added, “Russia seeks to eliminate the Iranian presence in the region. It wants to impose itself as a partner to the US in fighting IS. Meanwhile, Israeli strikes [are regularly launched] against Iranian targets across Syria.”

Khalifa indicated that IS cells in the Badiya use river supply lines to secure new recruits, weapons and mines from their areas of deployment to the north and east Euphrates region controlled by the Syrian Democratic Forces (SDF). “These weapons and fighters may have crossed over to Syria’s Badiya under the eyes of the SDF, who wants the regime and its allies to be preoccupied with fighting IS,” he said.

He explained that a large number of IS members are from the Badiya tribes, which makes them familiar with the nature of the region and capable of adapting and living in its difficult climate conditions.

On March 23, 2019, former US President Donald Trump announced the defeat of IS in Syria. The defeat culminated in the killing of IS leader Abu Bakr al-Baghdadi in October 2019 in a US military operation in Idlib province. Yet IS still poses a dangerous threat in Syria, as its members continue to control some areas that they use to launch attacks.