The Islamic State continues to haunt and drain out the Syrian regime forces even after it lost its last stronghold in Syria more than a year ago. 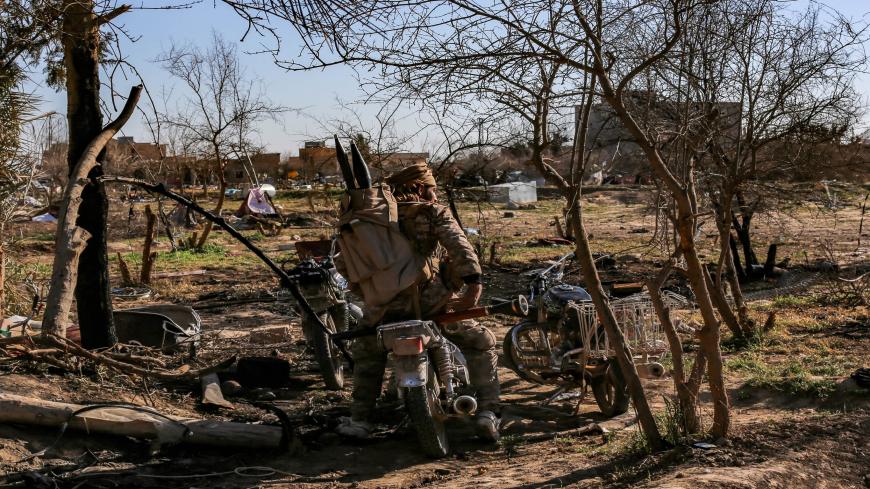 A fighter with the Syrian Democratic Forces sits on a motorcycle at a makeshift camp for Islamic State members and their families in the town of Baghouz, in the eastern province of Deir ez-Zor, Syria, March 9, 2019. - Dylan Collins/AFP via Getty Images

IDLIB, Syria — The Syrian Observatory for Human Rights (SOHR) said in a Dec. 4 report, “Military operations are ongoing in separate axes in the Syrian desert between the [Syrian] regime forces and the militias loyal to it on the one hand, and the Islamic State (IS) on the other. The clashes between the two sides are mostly concentrated in the Aleppo-Hama-Raqqa triangle, and to a lesser extent in the deserts of Deir Ez-Zor and Homs. The group seeks to maintain its activity in the area, by continuing its attacks, ambushes, and explosions. Meanwhile, the regime forces are doing their best to limit IS’ activity, with Russian support, through intense airstrikes.”

According to SOHR, since the Syrian Democratic Forces (SDF) announced their control of Baghouz village, IS’ last stronghold, on March 24, 2019, the human losses amounted to 1,020 deaths from the regime forces and the militants loyal to it of both Syrian and non-Syrian nationalities, two of whom were Russians; in addition to 140 deaths from non-Syrian pro-Iranian militias, all of whom were killed during IS attacks, bombings and ambushes in the west of the Euphrates, the desert of Deir ez-Zor, Raqqa, Homs and Suwayda.

The report also mentioned 562 deaths in IS’ ranks, during the same period.

Khalil al-Muqdad, a researcher on jihadist groups affairs, currently residing in Qatar, told Al-Monitor, “After losing its last stronghold in Baghouz, IS changed its strategy and reorganized its ranks, relying instead on ambushes and guerrilla warfare to eliminate its opponents. The group quickly started activating its cells and members that have redeployed in several areas. It targeted members and headquarters of the SDF, which led the campaign against IS with air and logistical support from the [US-led] international coalition. The group seems keen on pursuing this process and accelerating its pace by targeting regime convoys and Iranian militias, as well as allied militias, such as Liwa al-Quds [Jerusalem Brigade] and the National Defense Forces. It managed to inflict heavy losses in their ranks, then moved to attack detachments, fixed barracks and guard posts, especially in the vicinity of oil fields. This escalation coincided with an increase in the pace of operations in Iraq as well, as the group there [also] activated its guerrilla strategy.”

Muqdad noted that IS’ guerrilla strategy was the most prominent factor that allowed it to choose its targets accurately and attack them in a destructive and deadly manner. He said that the group would hit the regime convoys before their arrival, which incurred great losses and confused the regime’s offensive plans, as it deprived it of the advantage of regrouping and repositioning. IS then moved to the strategy of attacking convoys of oil tanks, burning and destroying dozens of them and even killing the drivers.

“There is no doubt that the group’s reliance on the strategy of ambushes and the element of surprise were two important factors in giving it an advantage, especially in a vast and sprawling area. The regime and Iranian militias' convoys travel long distances, which enable IS to monitor them and allow it to choose the best way to target them. IS laid minefields that caused the regime and Iranian militias heavy losses and even led to the death of a prominent Russian general. Such ambushes are carried out by small groups that know the terrain of the area well and cannot be detected even by drones,” Muqdad added.

He believes that IS took advantage of the US election crisis, which coincided with the speech of the group’s spokesman, Abu Hamza al-Qurashi, on Oct. 18, in which he called on IS cells to accelerate the pace of operations. “The cells immediately responded and we started hearing about operations stretching from Deir ez-Zor in the east to the countryside of Aleppo in the north, to the vicinity of Salamiyah in the eastern countryside of Hama, in western Syria, as well as the countryside of Homs and Palmyra.”

Speaking about IS’ expected operations in the coming days, Muqdad said, “I think that IS will try to find a foothold and strengthen its presence near Damascus and even on the border with Lebanon, especially in Wadi Barada. The group has effectively controlled the main roads that connect eastern and northern Syria with its west, which allows it the freedom to move in small groups with light and medium weapons and set up ambushes and seize weapons from its enemy. IS’ operations are not only limited to what it claims responsibility for; they vary between direct attacks, laying mines and ambushes, and intercepting convoys — not to mention directly eliminating opponents.”

Hamam Issa, a media activist in Idlib following up on IS’ operations, told Al-Monitor, “IS is highly active in Palmyra and al-Sukhnah desert in the eastern countryside of Homs in addition to the Athria-Khanasser area near the eastern Hama countryside and the eastern Deir ez-Zor countryside, which are vast areas in the desert that no party has been able to fully control. The Syrian desert is not a flat sandy land as some people imagine it to be; it has many hills, valleys and rugged areas that provide protection and camouflage for those holed up in it.”

Issa added, “After the Syrian [regime] forces failed to sweep the desert and expel IS, and because of the great losses they endured, in addition to fighting the opposition in Idlib, the regime had to deploy the Iran-backed Baqir Brigade, as well as Liwa al-Quds and the National Defense Forces, as auxiliary forces alongside the Syrian army, to fight IS in the desert. These forces played a prominent role in the military operation against the group, but they are yet to defeat it and put an end to its operations.”