The Islamic State has recently intensified its activity against the Syrian government forces and its allies, setting up a number of ambushes in the Syrian desert and killing dozens. 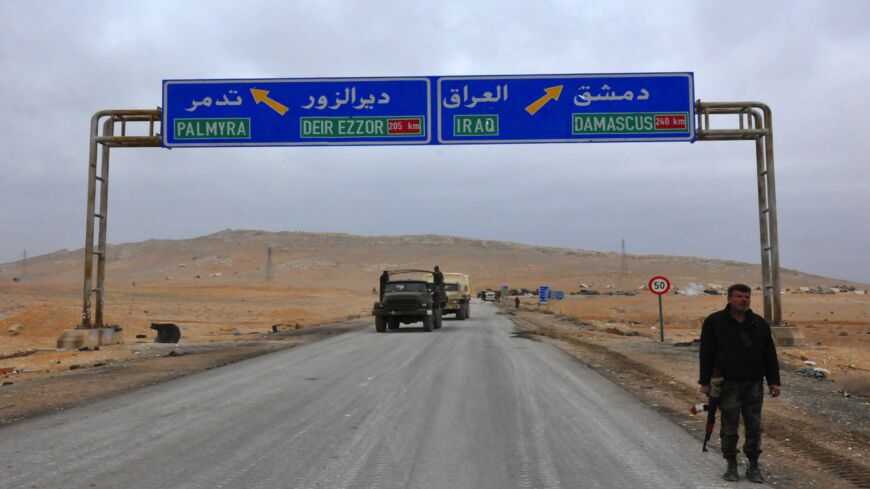 A picture taken on March 2, 2017, shows a sign displaying the routes to Palmyra, Deir ez-Zor, Damascus and Iraq as Syrian regime fighters advance to retake the ancient city of Palmyra from the Islamic State. - STRINGER/AFP via Getty Images

The Islamic State (IS) regularly targets military bases and vehicles in the Syrian desert, which extends between the governorates of Homs and Deir ez-Zor on the border with Iraq, the area to which IS fighters have retreated since they lost their last stronghold in Syria in 2019.

On March 6, Syria’s official SANA news agency quoted a government military source as saying that “13 soldiers were killed and 18 others were wounded when a military bus was attacked by terrorists in the Palmyra desert in the Homs countryside.”

More recently, on March 16, IS militants staged an ambush against military targets belonging to Iranian forces in the Syrian desert, killing three of them.

Sources told Al-Monitor that the government forces brought in military reinforcements to Palmyra from other areas in the Homs governorate, including military vehicles, weapons and soldiers from the 14th Special Forces Division.

On March 10, the Syrian Observatory for Human Rights (SOHR) reported that six members of the government forces were killed and seven others were injured after a landmine left behind by IS exploded near Jabal al-Amour in the Palmyra desert in eastern Homs.

The SOHR quoted sources as saying, “The regime forces supported by armed proxies and Russian helicopters that took off from Palmyra military airport have started a combing operation for the Syrian desert from Palmyra and Al-Soukhna en route to T2 and T3 areas in the Syrian desert in search of [IS] cells that have escalated its activities in the region recently.”

SOHR reported on March 10 that the death toll during the military operations pitting government forces and IS militants in the Syrian desert has reached 136 since the beginning of 2022. This includes 69 IS members; 67 government forces and allied fighters were killed in 21 IS operations, which were carried out through ambushes, armed attacks and bombings.

Raed al-Hamid, an Erbil-based journalist and researcher, told Al-Monitor, “Most of IS’ activities in Syria are linked to several factors, including taking advantage of security gaps in its areas of control in the desert, and the opportunities available to inflict more losses in the ranks of the regime forces by setting ambushes and targeting [military] cars. It also clashes with regime forces or Iranian-backed militias or Russian forces. It is crucial for IS to claim responsibility for every attack in order to prove its existence.”

He added, “Linking IS’ operations to the developments in Ukraine may not seem logical, as Russia, which is the first party to the war in Ukraine, has not reduced its ground presence in Syria, and its flights over the desert were already few compared to the flights targeting the Syrian opposition factions in Idlib and its countryside.”

Hamid noted that the death of IS’ leaders, including Abu Bakr al-Baghdadi and more recently Abu Ibrahim al-Qurayshi in early February, does not affect the group’s activities against the regime forces. “The military campaigns [against IS cells], led by the regime with Russian air support or with the participation of Russian ground forces, achieve some successes, but not at a level that could affect IS’ strength and capabilities.”

He added, “The regime forces’ losses may be double those of IS, despite the Russian air support. I believe this is due to several factors, the most important of which is the absence of combat motivation among the soldiers of the regime, especially those who were led to compulsory service.”

“IS still has many fighters whom it is keen to preserve as it has become more difficult to recruit more, especially after it lost a lot of support among the Sunni communities,” he said.

Hamid stressed that IS’ future in Syria depends on the strategies of the new leader, Abu al-Hassan al-Hashemi, as the policies of each leader differ, although the goals remain the same, all of which ultimately aim to establish an “Islamic State.”

Hammam Issa, a journalist based in Idlib, told Al-Monitor, “IS’ attacks against regime forces for years prove that IS still has the ability to plan and execute through mobile cells that often move on motorbikes. The regime forces and allied militias seem to have become almost powerless against IS’ mobile cells in the Syrian desert.”