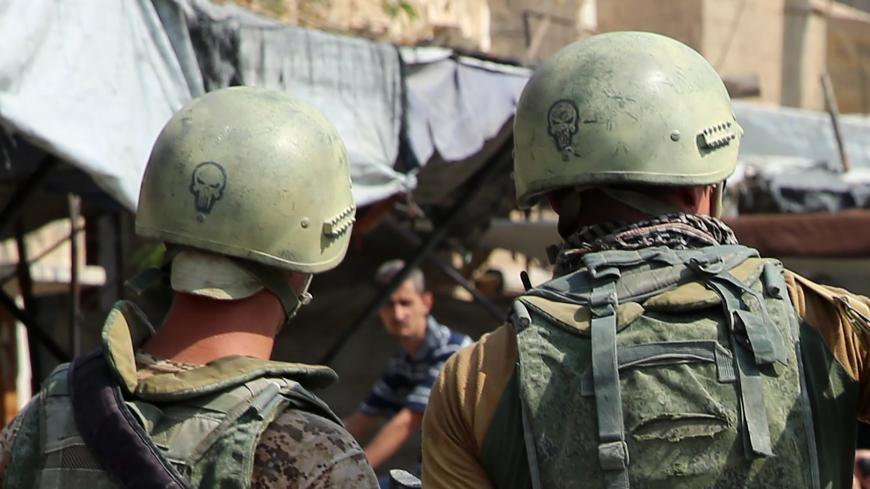 A picture taken during a press tour provided by the Russian armed forces shows Russian soldiers standing guard in a central street in Syria's eastern city of Deir ez-Zor, as locals pass by, on Sept. 15, 2017. On Aug. 21, 2020, a Russian major general was killed by a roadside bomb near Deiz ez-Zor. - DOMINIQUE DERDA/AFP via Getty Images

Maj. Gen. Vyacheslav Gladkikh died Tuesday after a roadside bomb detonated under a convoy of Russian soldiers and Syrian pro-regime militiamen in the desert near the city of Deir ez-Zor.

A local commander of Syria’s National Defense Forces, a pro-Assad militia, was also reportedly killed. A spokesperson for the militia did not immediately respond to Al-Monitor’s request for comment.

Video purporting to show the explosion circulated on social media this week. It was the first reported death of a Russian general in Syria since 2017, when a lieutenant general was killed in the same province, reportedly by mortar fire from the Islamic State (IS).

Deir ez-Zor and nearly all of Syrian territory west of the Euphrates River lie in Syrian government hands, with the major exception of Idlib province, the last rebel enclave in the country’s nearly decadelong civil war.

US-backed and Kurdish-led militias captured IS’ last remaining territory in March 2019, but the desert countryside south and east of Deir ez-Zor on the regime’s side of the Euphrates is rife with IS insurgents who continue to ambush and kill pro-Syrian regime forces.

Syria’s eastern Badia, or desert, remains the country’s last significant hot spot of IS activity. In April, more than two dozen Syrian pro-regime fighters were killed in IS attacks in Badia al-Sukhnah and Badia al-Sham, prompting Russian airstrikes, according to the Syrian Observatory for Human Rights.

Killings of local tribal figures recently rocked the east side of the Euphrates in Deir ez-Zor, which is controlled by the Kurdish-led Syrian Democratic Forces. It is not clear who carried out the slayings, though locals have alternatively blamed IS and the Assad regime.

IS insurgents continue to use networks of smugglers to traverse the desert border area between Iraq and Syria southwest of the Euphrates, according to a Syrian rebel source based in the area.

“They’ve changed their tactics there,” said the source, who declined to be named for security reasons. “They do nighttime infiltrations, lay mines and booby traps.”

The source told Al-Monitor via WhatsApp there are “a number of sites” in the Badia that have dozens, possibly hundreds of IS fighters.

A US official told Al-Monitor last month that there could be anywhere from 2,000 to 10,000 IS insurgents in sleeper cells across Iraq and Syria.

The Pentagon says US special forces at the isolated al-Tanf base in the Badia are there to keep pressure on IS in the border area, but rebels have told Al-Monitor that the proximity of Russian and Syrian forces on the roads outside the US-controlled zone make operations outside the area difficult.

The base has also served as an intelligence gathering site on Iran-linked militias crossing the Iraq-Syria border.