All eyes are on Hezbollah in Syria’s Deir ez-Zor

As the war is heating up in eastern Syria, specifically in Deir ez-Zor, the Lebanese Hezbollah movement and allied fighters are vying with US-backed Syrian democratic forces for control of areas liberated from the Islamic State. 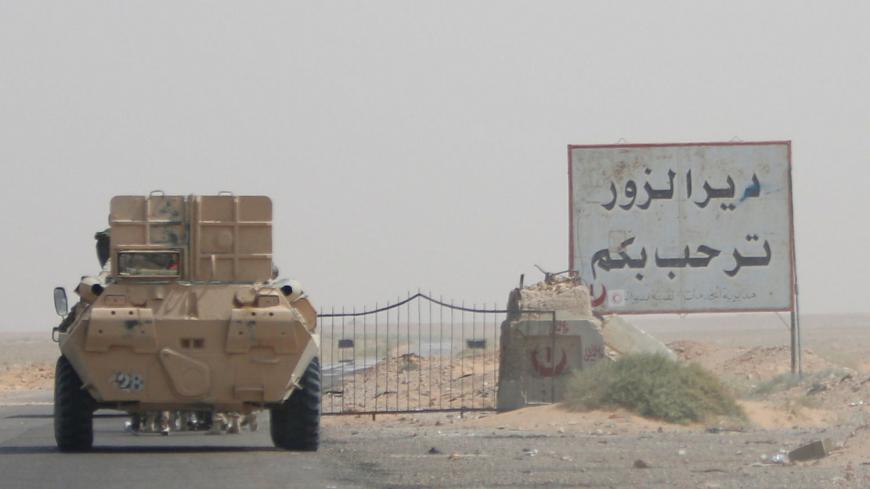 A road sign welcomes people to the town of Deir ez-Zour in Syria, Sept. 20, 2017. - REUTERS/Omar Sanadiki

The war is heating up in the Syrian region of Deir ez-Zor, where the US-backed Syrian Democratic Forces (SDF) and forces loyal to the regime of President Bashar al-Assad are competing for Islamic State (IS) territory with threats of clashes increasing. There in the Badia region, which connects Syria with Iraq, Hezbollah is playing a prominent role alongside regime forces, according to a Hezbollah commander who spoke to Al-Monitor.

All eyes are on Deir ez-Zor. The region, which was captured by IS in 2014, has strategic importance. First, it holds large deposits of oil and gas. According to an article published in April 2014 by the Carnegie Middle East Center, Deir ez-Zor accounted in 2011 for a production of 100,000 barrels per day. Second, it neighbors Iraq, which means that it is a necessary pathway for Iran, Hezbollah’s backer, should it seek to link Tehran to Beirut. In Iraq, Iran is relying on Harakat Hezbollah al-Nujaba, an armed Shiite faction, to create a supply route through Iraq to Damascus, running through a number of small Iraqi cities, including Qayrawan, according to a Reuters article published Sept. 22.

Securing the Syrian side of the border will be the task of Hezbollah, working alongside militias loyal to the Assad regime.

A Hezbollah commander told Al-Monitor on condition of anonymity that Mayadin and Bukamal, cities on the border with Iraq, are important because of the border security they provide "for Iraq and Syria, as well as Hezbollah. How [else] can we connect Iran to Lebanon?”

More than 8,000 Hezbollah fighters are involved in eastern Syria, said the commander, who added that over 70% of the area has been captured. “The Iranians and Russians agreed on the strategic decision to capture all of Badia,” he said.

In recent weeks, Syrian government troops and allied militias have been racing for control of the Euphrates River region along with pro-regime militias crossing the river, which previously was a dividing line between those militias and the SDF. On Sept. 15, according to Kurdish news website Rudaw, the SDF declared it would not allow Syrian army forces to cross the Euphrates River in Deir ez-Zor province and would re-establish control over the area. That same day, Bouthaina Shaaban, Assad’s top aide, said in an interview with Hezbollah’s Al Manar TV that the Syrian government would fight any force, including US-backed SDF forces battling IS militants.

But the Hezbollah commander indicated that the Lebanese militant group will not be involved in any fight against Kurdish forces. “Kurds are not our enemies. They worked with us in many places, and I don’t think [a war with them] is a possibility,” he said.

A joint operating room led by Iran, Hezbollah and the Syrian military runs the operation in Deir ez-Zor, he added, saying that Hezbollah is usually responsible for offensive operations and that its troops are generally followed by Syrian ones responsible for stabilizing various areas. “Engineering units of Hezbollah decide as well on the establishment of headquarters and the division of tasks and decide on the number of logistics units required,” he added.

The region has been a test of the Lebanese militant group’s capabilities because of challenging weather conditions. “The Badia is a difficult [landscape]. You can be somewhere and you find yourself someplace else because of the desert storms that suddenly appear. We lost 18 martyrs between Sukhna and Deir ez-Zor. IS encircled us. We were deployed on eight front lines. They used trucks of 1 ton to attack us, and our men ended up burned alive,” said the commander.

Despite the ferocity of the fights with IS in Deir ez-Zor, Hezbollah made a deal with the extremist group Aug. 27, evacuating hundreds of IS fighters and their families from a pocket of territory on the northeast Lebanese-Syrian border into militant-held eastern Syria. This decision was completely justified, the commander said: “As Muslims, we do not kill prisoners. Sayed Hassan [Nasrallah, Hezbollah’s chief] is human. If the battle required a change of position, what is the big deal?”

Besides eastern Syria, Hezbollah appears to be also silently working on another front line farther south. The Hezbollah commander said the organization is using the recent de-escalation deal to be implemented in south Syria to do reconnaissance work. His statement appeared to confirm what Al-Monitor had been told in a previous interview with a Hezbollah official. According to the Al-Monitor article, “The official noted that even if Hezbollah were not present near the Golan Heights, it still retains a capability to strike at the Israeli front from Syria if tensions were to flare between the two rivals … adding that the movement ‘has missiles with a range that could target Israel [from Syrian territory] without Hezbollah having to be physically present near the border area.’”

Hezbollah also appears to be reinforcing its presence in Lebanon. A source who is close to Hezbollah fighters and who spoke on condition of anonymity told Al-Monitor that the organization had sent some its fighters from Syria back to south Lebanon during the summer.

The source said Hezbollah has built a network of tunnels, bunkers and training camps in Lebanon's western mountains in the Bekaa Valley.

War, whether in Lebanon, Syria or elsewhere, remains at the crux of Hezbollah’s lifelong mission. “The war is not finished in Syria. I am still fighting, we will fight where we are needed … and we will go where the leadership sends us,” said the commander.