A firefight in the Deir ez-Zor desert is the latest sign of the Islamic State terror network's lingering presence. 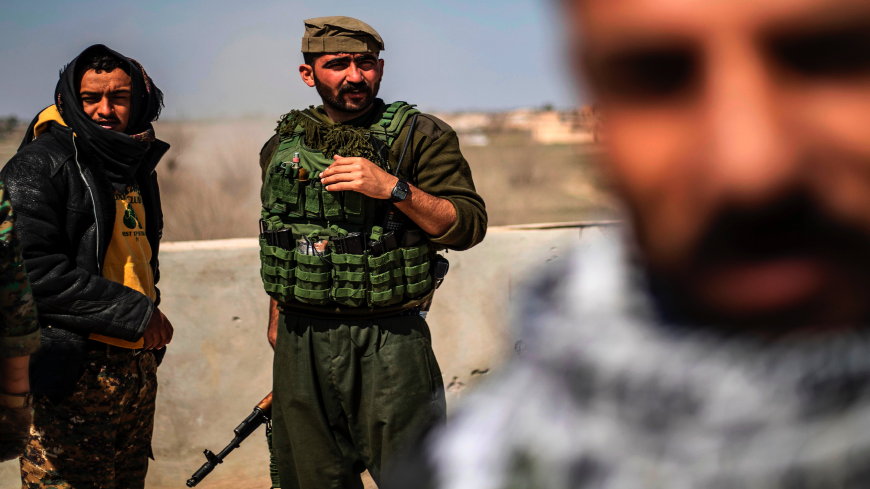 Members of the Kurdish-led Syrian Democratic Forces (SDF) are pictured on a rooftop in the village of Baghouz, near Syria's border with Iraq, in the eastern Deir ez-Zor province on March 11, 2019, during their continuing battle against the last pocket of Islamic State group (IS) jihadists. Baghouz is the latest major battlefront in Syria's complex civil war, which has killed more than 360,000 people since 2011. Beyond it, the Islamic State group retains a presence in eastern Syria's vast Badia desert and sleeper cells in the northeast. - DELIL SOULEIMAN/AFP via Getty Images

Suspected Islamic State (IS) fighters in eastern Syria killed more than two dozen fighters aligned with the regime of Syrian President Bashar al-Assad in an ambush on Monday, according to the United Kingdom-based Syrian Observatory for Human Rights (SOHR).

Some 26 pro-regime soldiers and members of the Al-Quds Brigade militia were killed after a skirmish in Syria’s eastern desert near the city of al-Mayadeen.

The deadly firefight is the latest in Syria’s eastern Deir ez-Zor province, which Syrian pro-regime forces backed by Russia have struggled to secure after retaking the region in a 2017 offensive.

Earlier this week, Russian airstrikes in the Badia (the Syrian desert) killed 18 IS fighters, the SOHR reported. The claims could not be independently verified.

Monday’s ambush is the deadliest since IS claimed an attack that left 39 pro-regime fighters dead in December.

Another suspected IS attack today killed four fighters of the Kurdish-led Syrian Democratic Forces (SDF) at a checkpoint in the Abu Khashab desert, on the east side of the Euphrates northwest of Deir ez-Zor, according to the SOHR.

The Euphrates River, which runs through Deir ez-Zor province, divides territorial control of eastern Syria. The US-backed SDF controls the east side of the river, while the Russia-backed Syrian regime controls the west side.

At its peak, IS’ so-called caliphate ruled over some 8 million people between eastern Syria and northwest Iraq. The US-led multinational coalition against IS and the SDF captured IS’ final territory at Baghuz in eastern Syria in March 2019.

But the group maintains fragmented networks of sleeper cells across Iraq and Syria, and sporadic attacks on local security forces, as well as assassinations of tribal and political figures, continue.

A United Nations report last year estimated some 10,000 IS fighters remain at large.

Yesterday, the commander of US forces in the Middle East said the terror group has “gone to ground,” but noted that isolated cells are constantly seeking to reconnect, posing a continued threat that has yet to be completely defeated.

Syria’s Badia remains a hotspot of IS attacks. Last year, a Russian major general was killed by a roadside bomb in the desert outside the city of Deir ez-Zor.