The Islamic State is threatening to kill employees in the Kurdish-led Autonomous Administration of North and East Syria in the countryside of Deir ez-Zor if they continue to report to their jobs. 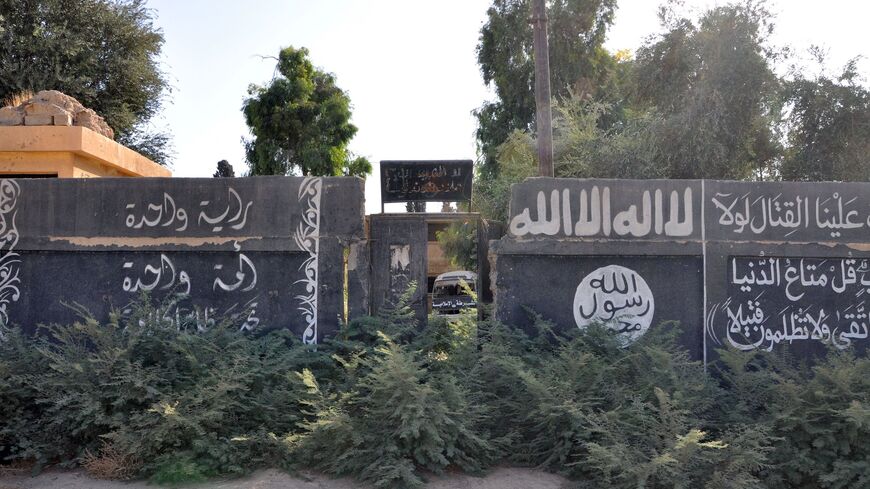 A picture taken on October 20, 2017, shows Islamic State group writing on a wall in the recently seized strategic Syrian town of Mayadeen. - STRINGER/AFP via Getty Images

ALEPPO, Syria — Islamic State (IS) cells in the countryside of Deir ez-Zor in eastern Syria threatened employees and workers of institutions linked to the Kurdish-led Autonomous Administration of North and East Syria and warned them against carrying out work for the administration.

“On the morning of Aug. 9, the employees of the local council and the municipality in the town of al-Hariji in the northeastern countryside of Deir ez-Zor were surprised to find upon arrival at their workplace paper notes bearing the IS logo and the name and function of each employee,” an official at the Autonomous Administration of North and East Syria told Al-Monitor on condition of anonymity.

“The notes included the names of 18 employees. They were threatened with death if they continued to work for the Autonomous Administration. The employees who received the death threats are mainly public servants, guards at the local council and educators. Most of them resigned out of fear for their lives because IS cells have been particularly active recently and might carry out the threats,” the official added.

Despite the military operations Kurdish forces are carrying out with international support against the group’s remnants in northeast Syria, IS cells remain active and a danger to civilians in the area, as well as Kurdish forces and employees working at the Autonomous Administration and its affiliated institutions.

Nour Bakari, a journalist who resides in the countryside of Deir ez-Zor — which is held by Kurdish forces — told Al-Monitor, “IS is very active in the areas under the control of the Kurdish-led Syrian Democratic Forces (SDF) in northeastern Syria, especially in Deir ez-Zor province. IS follows a policy of threats to intimidate the SDF and Autonomous Administration personnel.”

He added, “In some instances, Autonomous Administration personnel and former Free Syrian Army (FSA) members received threats through WhatsApp accounts belonging to IS fighters. The messages were in the name of IS. They contained death threats, calls to repent and calls to resign from the ranks of the SDF as the only way to escape death.”

Bakari added, “Many SDF members from the towns of al-Shheel, al-Tayyanah, Jadeed Bakkarah, Jadeed Ekedat, al-Sour and al-Hariji in the countryside of Deir ez-Zor received death threats from IS through WhatsApp. The intention is to push them to leave the SDF.”

He continued, “IS’ activity has not been restricted to threats as the group’s members are forcibly collecting money from people in the area and from various commercial sectors, as IS seeks to bring in financial resources. IS members also send sealed letters to people across the Deir ez-Zor province, asking them to pay royal fees.”

“The royal fees are similar to the concept of Zakat, or fees imposed on some merchants and the rich in general, which IS used to collect [when it was in control of the area]. By mid-2020, the group changed the name from ‘Zakat’ to ‘royal fees’ after IS lost its control and influence over the area and started relying on hidden cells. Whoever fails to pay the royal fees would be executed,” he added.

Despite losing its last territory in Syria in March 2019, IS continues to launch attacks against Syrian government forces in the Badia area (Syrian desert) and against Kurdish forces in northeastern Syria.

According to IS’ official al-Naba newspaper, IS cells launched six operations between Aug. 5 and Aug. 12, killing 14 people. The operations were carried out in the provinces of Raqqa, Deir ez-Zor and Daraa (in the south of Syria).

In two days only, IS claimed responsibility for four attacks targeting SDF and Syrian government forces.

On Aug. 9, IS gunmen attacked with machine guns and explosives an SDF military vehicle in the Ezir area of al-Busayrah town (in Deir ez-Zor province), leaving casualties, injuries and material damage.

A few hours later, IS gunmen targeted an SDF checkpoint in the town of al-Wahid in the east of Deir ez-Zor, leaving soldiers wounded at the checkpoint. The shootout was followed by an explosion that hit the rescue teams rushing to the area. A vehicle was damaged, one person was killed and others were injured.

On Aug. 8, IS gunmen killed an SDF member with machine guns near al-Attal roundabout in al-Busayrah area in the countryside of Deir ez-Zor.

The fourth attack claimed by IS targeted a military vehicle belonging to Syrian government forces near al-Tabqa military airbase in Raqqa province on Aug. 9. Four soldiers were killed, according to IS.

Neither the SDF nor the Syrian government usually report such attacks against their forces, although they occur on almost a daily basis — unless the death toll is high. On March 6, a Syrian military source said a government military vehicle in the Palmyra desert came under a “terrorist attack” with gunmen using various types of weapons. The source said the attack left 13 dead, including officers, and wounded 18 others.

Speaking at the UN Security Council on Aug. 9, Under-Secretary-General of the United Nations Office of Counter-Terrorism Vladimir Voronkov said that IS continues to threaten international peace and security despite its regional defeat and the losses incurred by its leadership.