The Islamic State has launched several attacks against the Kurdish-led forces in northeast Syria amid lax security by the Syrian Democratic Forces. 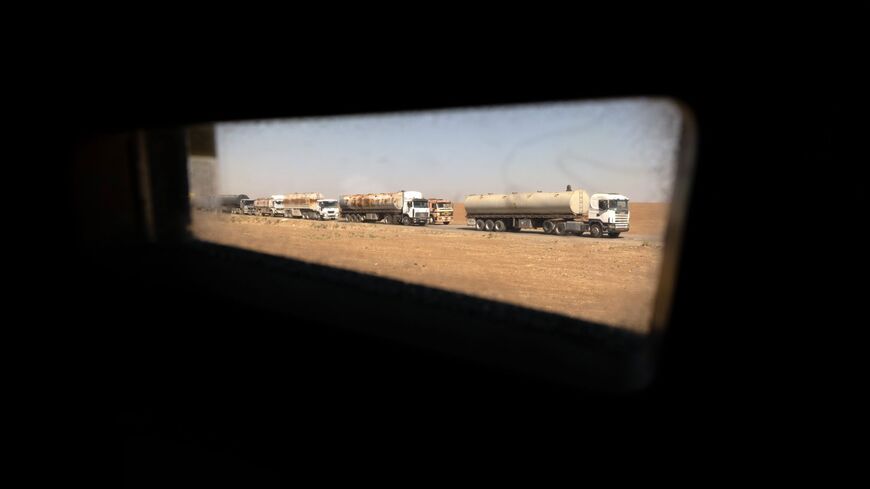 A convoy of oil tankers wait at a military checkpoint as seen through a bulletproof window of a U.S. Army patrol vehicle on May 26, 2021 near the Turkish border in northeastern Syria. - John Moore/Getty Images

The Islamic State has recently renewed its activities in the areas under the control of the Kurdish-led Syrian Democratic Forces (SDF) in northeast Syria.

On Oct. 14, IS claimed responsibility for an operation in the village of Tal Alo in Hasakah province, targeting Hamidi Bandar Hamidi al-Hadi, the son of the leader of al-Sanadid Forces (Forces of the Brave) formed by the Arab Shammar tribe and operating under the umbrella of the SDF and the US-led coalition.

Hadi’s car was blown up on the road between Tal Alo and Sheikh Hamidi’s farm in the Qamishli countryside. Hadi, who survived the assassination attempt, is also the grandson of the sheikh of the Shammar tribe in Syria, Hamidi Daham al-Jarba.

On Oct. 19, IS members also shot dead Amer Awad al-Shawi, a former member of the SDF, and his companion Ayman al-Shawi, in al-Busayrah in the eastern countryside of Deir ez-Zor.

Zain al-Abidin al-Akeidi, a journalist from the Deir ez-Zor countryside, told Al-Monitor, “IS would suspend its operations in the area for a few days or a few weeks, only to make a more ferocious comeback. Moreover, some tribes are creating a suitable environment for IS. The large numbers of displaced people in the eastern and northeastern countrysides of Deir ez-zor enables IS to hide its cells and fighters.”

He explained that IS has been able to regain momentum amid the fragile security of the SDF. “Corruption plaguing most security services affiliated with the SDF is fostering the presence of IS, which pays bribes for freeing its fighters and suspending prosecutions against its cells. Also, the religiously conservative tribal areas are ethnically and religiously sensitive toward the Kurdish forces and label the SDF as atheists or enemies of Islam. In some cases, they even sympathize with IS.”

Akeidi added, “IS carries out security operations according to the method of lone wolves. It has great influence in the countryside of Deir ez-Zor, and sometimes imposes zakat [obligatory charitable payment] on residents. IS also pursues workers and employees in the oil fields run by the SDF." But the failed assassination attempt, he said, was the first time IS broke into an area controlled by al-Sanadid forces.

“IS’ strategies are based on three main factors to ensure its continuity," Raed al-Hamid, an Erbil-based expert on armed groups, told Al-Monitor. The first, he said, is preserving its own men, which is "why it has been operating in small, mobile groups of less than 15 fighters. IS has stopped fighting major offensive battles in large numbers to preserve its human resources.”

The second factor, he said, is that "the popularity of IS’ ideology seems to be fading. Even if it is still able to lure in some young people, their numbers remain limited in Iraq and Syria. The third and most crucial and vital factor is financial. IS is working on several fronts to obtain financial revenues. It is controlling the main roads by setting up fake temporary checkpoints or ambushes to intercept convoys of trucks and tanks. It is also imposing taxes on the owners of shipping companies.”