Islamic State cells carry out assassinations against the SDF in the SDF-controlled countryside of Deir ez-Zor on an almost daily basis, affecting some civilians and tribal leaders close to the SDF. 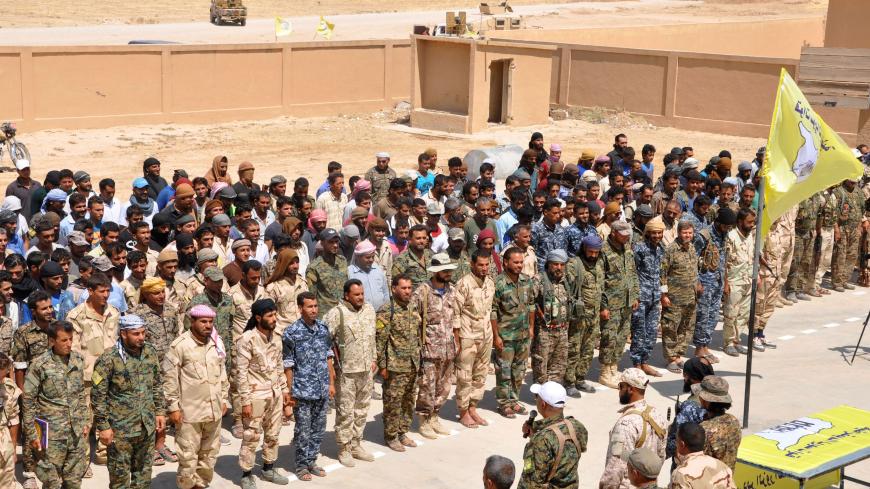 Members of the Deir ez-Zor Military Council, a coalition of Arab tribes and fighters that belongs to the broader US-backed Syrian Democratic Forces, stand in line during an announcement by their leader, Ahmed Abu Khawlah (bottom-C), in the town of Shadadi, about 60 kilometers (37 miles) south of the northeastern Syrian city of Hasakah, on Aug. 25, 2017. - AYHAM AL-MOHAMMAD/AFP via Getty Images)

IDLIB, Syria — Cells affiliated with the Islamic State (IS) have been carrying out assassinations against the Kurdish-led Syrian Democratic Forces (SDF) in Deir ez-Zor, in eastern Syria. These cells have become widely active since the beginning of 2020 after their activities had subsided following the loss of their last stronghold, al-Baghouz, in eastern Deir ez-Zor in early 2019.

IS’ operations have varied since losing ground in the face of the US-backed SDF. They started with attacking checkpoints and centers affiliated with the SDF and turned to assassinating SDF operatives or collaborators with the SDF and planting roadside bombs to target the SDF.

The Syrian Observatory for Human Rights (SOHR) had reported on Sept. 11 that 576 fighters, civilians, oil field workers and officials in service agencies have been assassinated since June 2018 within four governorates, namely Aleppo, Deir ez-Zor, Raqqa and Hasakah, in addition to the Manbij area, in the northeastern Aleppo governorate, all of which are under the control of the SDF.

“Armed cells assassinated 201 civilians, including 15 children and 11 women, in the eastern countryside of Deir ez-Zor, the countryside of Hasakah, Raqqa city and its countryside, and the Manbij area, in addition to the assassination of 371 SDF fighters, including local leaders in the same areas, while four members of the international coalition [against IS] were killed, not to mention the dozens of wounded as a result of these assassinations,” SOHR added.

After losing al-Baghouz, many IS affiliates and leaders remained in SDF-controlled areas, secretly working for the group. They were helped by many factors, most importantly the fact that these are tribal areas and tribes do not report IS affiliates to the SDF security authorities.

In this context, Zain al-Abidin, a Syrian journalist residing in the countryside of Deir ez-Zor, told Al-Monitor, “IS cells target SDF members, especially in the area between southern Raqqa and the southeastern countryside of Hasakah, reaching al-Baghouz. First, they target SDF or its operatives, as well as employees at SDF agencies or persons suspected of collaborating with the SDF, in addition to tribal leaders.”

He added, “IS also targets people who deal with drugs or sell tobacco or those who do not pay their zakat tax (obligatory charitable payment) to the group. Into the bargain, people who engage in sorcery, even though they are civilians, are targeted, and these cells often kill secular or non-practicing people, as well as those suspected of having extramarital sexual relations. IS cells are most active in the eastern countryside of Deir ez-Zor, such as what has become known as the Triangle of Death, as well as Diban and al-Shuhail and al-Hawayj. IS constantly targets SDF patrols on al-Kharafi road that connects Deir ez-Zor to Hasakah and in the northern countryside of Deir ez-Zor toward al-Sour and al-Sour countryside."

Abidin noted, “The majority of cell leaders are Iraqis hiding out in the Deir ez-Zor desert, specifically in the Rawda desert near the Iraqi borders, which is a rugged area with numerous caves. Meanwhile, IS cells received sympathy from most of the people of Deir ez-Zor from a religious and tribal standpoint since they believe the SDF is against Islam and against Arabs. Indeed, IS is hated, but the SDF is also not appreciated by the people there. These are tribal areas, and if members of a tribe are affiliated with IS, the tribe would cover for them.”

He continued, “The SDF’s bad image among the people and their racist behavior are all factors that help the work and activity of IS cells. Since the SDF lacks popularity, IS finds it easier to operate amid SDF’s weak security. These IS cells carry out individual operations, mostly in the middle of the night. In addition, IS has planted fear among the people, so no one dares to report anything for fear of being targeted by the group.”

Abidin added, “Further facilitating IS’ activity is the corruption plaguing the SDF; some SDF leaders collaborate with IS and notify the group when a crackdown is underway so they can escape. IS operates at night and the SDF takes over during the day. Meanwhile, most victims are Arab SDF-affiliates, but the SDF only truly cares about oil in Deir ez-Zor.”

He stressed that the US-led international coalition cannot pursue individuals, which is the way cells operate. There is no plan to eliminate IS cells, as they do not constitute an army but operate individually.

Abidin said that Deir ez-Zor is a large geographical area, allowing IS cells to easily move around, while a large number of displaced people live in this area, which constitutes an appropriate environment for IS and makes it easier for IS affiliates to hide among the crowds since the displaced people’s affiliations are unknown.

Ahmed al-Sheble, a journalist from the Raqqa countryside who is currently residing near the Turkish-Syrian border in the Idlib countryside, told Al-Monitor, “The areas in which IS is active are the villages on the bank of the Euphrates River opposite areas controlled by the [Syrian] regime and Iran such as al-Shuhail, Hajin, al-Susah and al-Baghouz, eastern Deir ez-Zor. Many IS cells are stationed there. Over 500 IS affiliates were released by the SDF a while ago, and they communicate with other IS members inside and outside the area to target the SDF.”

He added, “Meanwhile, the SDF can always confront these cells with the support of the international coalition, but the SDF wants the area to be unstable in order to keep receiving support from the US. Security stability in the Deir ez-Zor countryside does not serve the SDF’s interests.”

Sheble noted, “IS cells will remain as long as the SDF does, because the latter carries out acts of racism and discrimination against the Arabs, and this constitutes a strong argument for IS to keep going. As long as marginalization, injustice and detention centers exist, IS cells will remain active. Meanwhile, revenge keeps hovering over the relationship between IS and the Kurds, so this battle between the two will never end.”