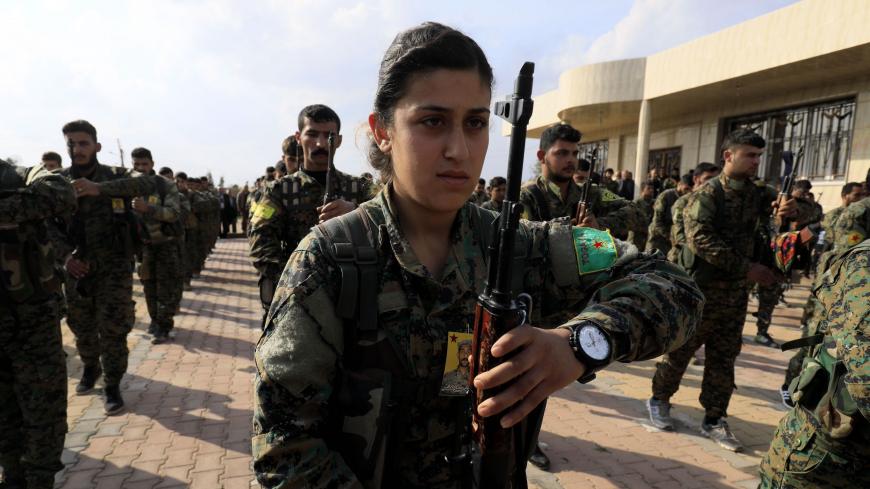 Members of the Kurdish People's Protection Units and Women's Protection Units attend the funeral of Kurdish fighters from the Syrian Democratic Forces that were killed in combat against Islamic State group in Deir ez-Zor, on March 3, 2018, in Qamishli. - DELIL SOULEIMAN/AFP via Getty Images

Abdallah is best known for having served as spokesperson for the Syrian Democratic Forces (SDF) campaign to capture Deir ez-Zor province from the Islamic State in 2017. Though she survived the attack, at least one other person in the vehicle was wounded.

Local reports said that masked men on a motorcycle opened fire on her van, which was traveling on al-Kharafi Road between Deir ez-Zor and Hasakah provinces.

The attack is believed to be either the fourth or the fifth attempt on her life. Last month a vehicle in which she was travelling struck a motorcycle, leading to preliminary reports of another attempt that were later denied by the SDF’s Deir ez-Zor Military Council.

More than a year after the final corner of the Islamic State’s so-called caliphate was overrun by the Kurdish-led alliance, Deir ez-Zor remains restive, with suspected IS sleeper cells continuing to assassinate local tribal figures.

Last week Abdallah denied rumors the SDF had any involvement in the killings. The US-led military coalition against IS said earlier this year that the regime of President Bashar al-Assad and its main foreign backer, Russia, exploit discontent in Arab-majority areas controlled by the SDF.

Renewed protests broke out in Deir ez-Zor’s eastern countryside last month amid complaints over a lack of resources and security. The area east of the Euphrates River remains under the control of the Deir ez-Zor Military Council, the local arm of the SDF.

The SDF launched another sweeping operation to track down IS sleeper cells in the Iraq-Syria border area last week.

On Friday, representatives of the US State Department reportedly met with tribal leaders from Tabqa and Raqqa in northeast Syria. US officials have engaged closely with Arab tribal representatives in SDF-controlled territory in an effort to hold the autonomous northeast together amid pressure from the Assad regime and Turkey, which sees the SDF as a terrorist organization.

Abdallah, who is of Arab descent from Deir ez-Zor city, joined the Kurdish-led women’s’ forces in 2016. Last year she became the first female co-chair of the Deir ez-Zor Military Council, according to the Wilson Center.