After years of calls for greater local decision-making from the Arab majority in Syria’s eastern Deir ez-Zor, the part of the region under the Kurdish-led SDF plans to divide the territory into four sections. What appears to have possibly been an attempt to assassinate the highest civilian authority in the region has meanwhile raised serious concerns. 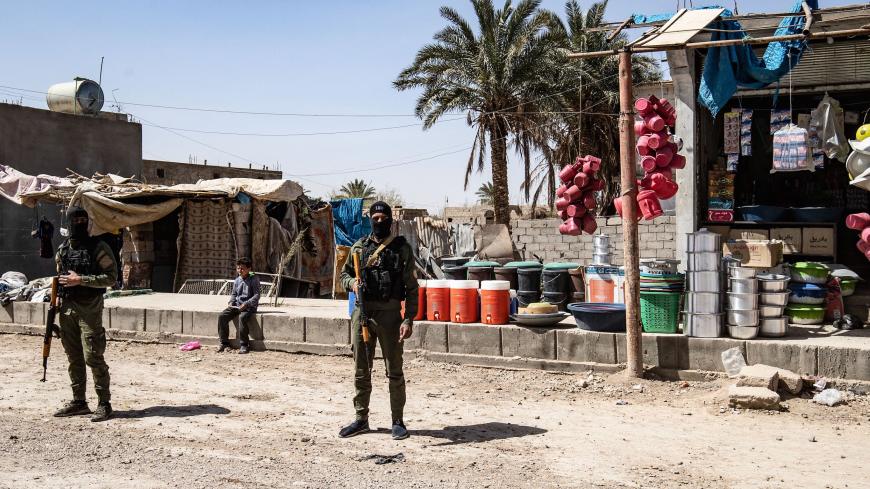 Fighters of the Kurdish-led Syrian Democratic Forces (SDF) stand guard in the village of Baghouz in Syria's northern Deir Ezzor province, where two years ago, the Islamic State made its last stand before being defeated, March 24, 2021. - Delil Souleiman/AFP via Getty Images

A move to divide Syria’s eastern Deir ez-Zor into four administrative sections to give the local Arab population more control under the Kurdish-led Syrian Democratic Forces (SDF) was announced shortly before US Deputy Special Envoy to Syria David Brownstein’s visit to the oil-rich, much-suffering region.

A murky Jan. 30 apparent assassination attempt against the co-chair of the Deir ez-Zor civil council, Ghassan al-Youssef, still hangs heavily, however. Some residents of the Arab region say they believe the SDF planned the attack to get rid of Youssef, who is a leading proponent of the plan.

Youssef told Al-Monitor in mid-March during a brief visit to the capital of the Kurdistan Region of Iraq that his convoy had been fired upon when he was leaving Raqqa after speaking to local and tribal officials.

“It was around 5:30 p.m. in the evening and I was coming back from Raqqa, about 25 kilometers (15.5 miles) from the city on the road to Deir ez-Zor. Men at the checkpoint that is not usually there — what we refer to as a 'flying checkpoint' — opened fire on me and my escorts. I was in an armored car and there was another armored car behind me, but my guard [who was also his relative but in an unarmored vehicle] was shot and killed.”

He continued, “I stopped the car some kilometers down the road and called for help and members of my tribe came, [but] the men at the checkpoint fled immediately after they shot at us.”

SDF-linked media later reported that those who killed Youssef’s guard were members of their security forces who had been “under intense pressure from security threats in the region.”

An SDF spokesperson contacted by Al-Monitor for comment said that the matter was being dealt with by Raqqa's internal security forces and that they had issued a statement on the incident, sending a link to the SDF-connected media outlet North Press Agency claiming that the convoy had not slowed down at the checkpoint and that this was why it was fired upon, killing one person and wounding three others.

Eastern Deir ez-Zor as well as Raqqa province where the assassination attempt took place are both under the control of the Kurdish-led SDF but have Arab-majority populations. Tribal ties in these regions are strong.

Youssef said that he had been warned about a week prior by someone “at a high level” in the US-led international anti-IS coalition that he should stay home or change his routes constantly as an assassination attempt was planned against him. He allowed Al-Monitor to listen to the voice message on his phone, but there was no way to verify whether the voice in the Arabic message was in fact the translator of a coalition official.

Youssef and other civil administration officials and local dignitaries have long been threatened by both the Islamic State (IS) and others.

As civil council co-chair, Youssef has also often had to intervene to try to get the rights of local Arabs in his region respected by the Kurdish-led SDF. This journalist was a witness firsthand to such a case when she was reporting from the region in December and several Arab men were arrested by the SDF, allegedly for organizing protests; they were released some days later after Youssef argued their case and spoke to the SDF on the matter. He has often said that things do not align with the version of events put out by the SDF media, and has spoken to journalists and the coalition for years about the need for the local Arab community to have greater decision-making control over their area. Some say he is seen as a nuisance by some in the SDF leadership that do not want to share any control with the local Arab population.

In regard to the plan to divide the SDF-controlled parts of the Arab-majority region into four sections, Youssef said, “Each will have 42 people in the district administration who will report directly to the main regional government that I lead, [alongside] various committees — health, education, economy, and so on. Nine legal advisers will be monitoring the committees' work to ensure that no corruption or other illegal practices occur. We managed to create this plan after many meetings and seven months of work.”

Omar Abu Layla, a Germany-based native of Deir ez-Zor and founder of the media activist news site DeirEzzor 24, told Al-Monitor in a March 24 message that the division would have positive effects, as it would involve “the people of the area assuming responsibility.”

However, he added, “The key question is whether the Autonomous Administration [of North and East Syria] will provide necessary support for Deir ez-Zor so that committees can serve the residents."

Abu Layla noted that the region is “devastated” and that reconstruction and help for people harmed by years of war are needed, “especially with [IS] and Iran cells’ constant threats to destabilize east of the Euphrates. Let’s not forget that mass migration has occurred in the area due to lack of seriousness” in dealing with tragedies suffered by the population.

Eastern Deir ez-Zor, in addition to being where IS made its final territorial stand in the country in early 2019, was the location of a 2014 massacre of several hundred men and boys from the Shaitat tribe.

Most of the western part of the Deir ez-Zor region is under Syrian central government forces and/or de facto control by Iran-linked “resistance” factions. Many residents of those areas have fled to eastern Deir ez-Zor in recent years as a result.

Thousands now live in areas covered by the Deir ez-Zor civil council administration under SDF control — an area about one and a half times the size of Lebanon, according to Youssef, in Syria’s second-largest province — as internally displaced persons.

Several Deir ez-Zor natives decided in recent months to leave the country entirely. Many of these are men who go abroad and leave their wives and children in the province temporarily while they seek opportunities elsewhere. Al-Monitor met in Erbil with one of them — a man who had been involved in fighting against IS for years with opposition groups. He said that he “can no longer see a future for Arabs under the SDF,” and claimed that several of his friends had been arrested arbitrarily by the Kurdish-led group.

On March 14, the SDF apologized after its fighters beat medical staff at a hospital in the Deir ez-Zor town of Shuhail (al-Shahil), destroyed hospital equipment and burned homes on March 5. When this journalist reported from the town in May 2019, locals blamed the SDF for the killing of several innocent people earlier that month. They said those who lost their lives included teenage Arab boys who had fought IS as part of the SDF and showed the boys’ SDF identification cards. Al-Monitor was also taken to a location on the Euphrates River nearby where smuggling oil to regime-held areas was occurring, which locals said was only one case of “them stealing our oil.”

Though Kurdish-led, the SDF claims most of its fighters are now Arab. Many of these local Arabs joined for the wages offered amid scant opportunities to provide for themselves and their families.

Youssef told Al-Monitor that, following the January assassination attempt, he was being even more careful than before, but that he has been entrusted with “the hopes of many people in Deir ez-Zor.” He said that given his network and experience, he had a duty to continue trying to help the community.

“I have received hundreds of messages and calls from tribal figures” from eastern Syria during only a few days in Erbil, he added.

During his visit this month to eastern Syria, a few days after Al-Monitor’s interview with Youssef in Erbil, Brownstein met with Youssef in the regional government offices in Deir ez-Zor. Later both were present at the opening of a hospital built with US-led international coalition support in Abu Hamam, a town in the Shaitat tribal area of Deir ez-Zor.

Youssef told Al-Monitor in a message from Deir ez-Zor on March 24 that he had told Brownstein that the fight against IS was far from over and that the stability of the province — created in large part through such projects — was key to this fight.