Inhabitants of Syria’s eastern Deir ez-Zor region, which has an Arab-majority but is under the control of the Kurdish-led SDF, have protested repeatedly in recent weeks against alleged arbitrary arrests, price gouging, and lack of services; many urge more direct contact between the local population and the international coalition. 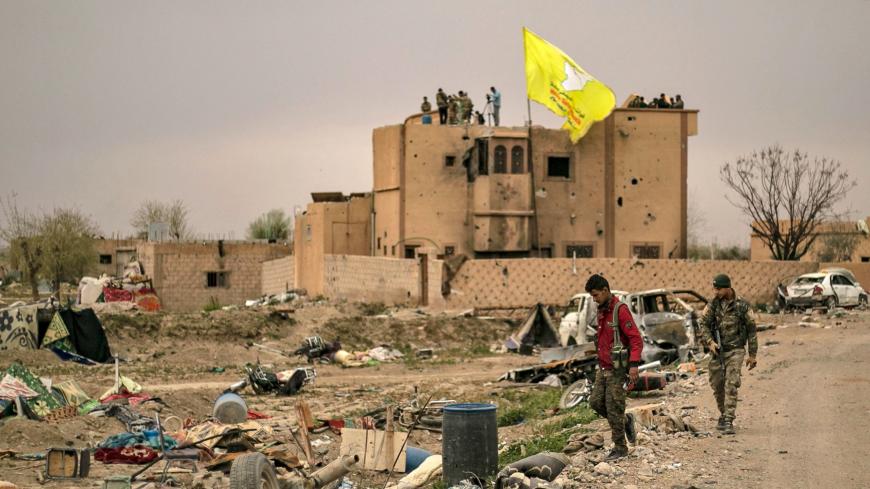 Members of the Kurdish-led Syrian Democratic Forces (SDF) inspect destroyed vehicles along the side of a road in the village of Baghouz in Syria's eastern Deir Ez-Zor province near the Iraqi border on March 24, 2019, a day after the Islamic State's "caliphate" was declared defeated by the US-backed Kurdish-led SDF. Abu Hamam, where Arab protesters have been in conflict with the SDF, is northwest of Baghouz. - DELIL SOULEIMAN/AFP via Getty Images

During a visit in December, Al-Monitor heard once again frequent claims of young men arrested for unclear reasons and that the SDF engages in price gouging in the Arab-majority region.

Locals also claimed that the SDF ensures that most local jobs go to those close to it, while conveying a false view of inhabitants’ demands through its media operations.

The town of Abu Hamam has seen multiple protests over the past month.

Though the SDF-linked North Press Agency said protesters were demanding that the SDF “ignore tribal notables” and that the demonstrations were simply for better services and not against the Kurdish-led forces (indicating that those saying otherwise were “cells affiliated with the Syrian government”), individuals Al-Monitor spoke with in the town on the day of the mid-December protest instead stridently denied this.

In a statement sent to Al-Monitor that had been published in a Telegram group counting over 6,000 members, the Popular Movement Coordination in Shaitat said in English and Arabic that demands included “to release detainees and return the stolen items that were stolen from homes during raids by the SDF and then meet with the International Coalition Forces to negotiate the demands of the demonstrators.” The coalition was formed to fight the Islamic State (IS).

Located in the Shaitat tribal area, Abu Hamam and the Shaitat tribe suffered severely at the hands of IS, which massacred and beheaded hundreds of mostly men and boys during an August 2014 uprising by locals.

Al-Monitor was in Abu Hamam on Dec. 14-16, when one protest was held after which a number of men who had allegedly been involved in the demonstration were arrested at their homes.

This journalist was provided with the names of five, some of whom she had met on a 2019 reporting trip to the region. One had, at that time, taken her to an aid project run by the Furatna organization and shown her places near his home where IS had for days left the heads of men from his tribe who had been beheaded for rising up against the extremist organization when it was in control of the area.

Al-Monitor brought up the issue of the arrests with Deiz ez-Zor civil council chief Ghassan al-Youssef in an interview Dec. 16 in the town of Abu Khashab, a few hours’ drive north through an area of desert land where IS cells are believed to still be operating. Youssef holds the highest civilian position of the region in which the arrests took place, and his office is meant to represent the Arab population of the region — which falls under the Kurds' autonomous administration — but has no say over who is arrested by the SDF. He often ends up trying to secure the release of unlawfully or arbitrarily arrested civilians in his region and feels this is an unnecessary burden as these people should not have been arrested in the first place.

Youssef promised to look into the matter but said, “I shouldn’t have to do this every time.” With a hint of exasperation in his voice, he asked, “What is the problem if they want to hold a demonstration?” in reference to the frequent arrests of locals by the SDF, who often claim they have “captured terrorists” only to later release them without charge.

Al-Monitor was told by a local source that the men who had been arrested in Abu Hamam had been released without charge two days later.

The bigger problem, however, is when the men are not only not released, but disappear entirely, locals said.

One of the men, whom Al-Monitor met on a previous trip and who now runs his own construction company, said in a WhatsApp exchange Jan. 17 that the SDF had stolen some of his property during the arrest and that it still had not been returned over a month after the arrest. The man said he had fought alongside the SDF in several battles against IS but returned to civilian life after suffering an injury.

Permission to access the Shaitat tribal area or anywhere near it is exceedingly difficult for journalists to obtain. This journalist reported from the area in May 2019, two months after the defeat of IS in Baghouz to the south.

The arrests are seen by many in the area as warnings. Some local residents expressed fear that anyone the SDF did not approve of could be accused of terrorism on false charges.

One man, who asked simply to be referred to as a “local leader of the Shaitat tribe” for security reasons, told Al-Monitor during an interview at his home, “The truth is, most of the [Arab] locals that are leaders for the SDF in our area were with IS before” and “if we had known this would be the case now, we would all have joined IS.”

The local leader interviewed by Al-Monitor said the Kurdish-led SDF, based farther north, also “sends us fuel of extremely bad quality,” adding that the SDF takes the oil from Deir ez-Zor fields and “then they send half of a shipment of fuel to Dhiban, where they mix it with low quality materials and then sell it to us” at much higher prices.

Good quality fuel, he said, could be bought in Hasakah for less than a fourth of the price of its poor quality equivalent in the Shaitat area.

And “every day we are seeing problems with our vehicles, since burning this fuel ruins” parts of them, he said.

He stressed that a great deal of oil smuggling continues into regime-held areas from the area north of the Shaitat region across the Euphrates River.

On Al-Monitor’s visit, long lines of vehicles could be seen outside gasoline stations and those waiting claimed often there is simply no fuel.

“We have been asking [the SDF] for change for two years and no one has answered our demands in any way,” despite multiple protests and attempts to engage in dialogue, he said.

Some inhabitants told Al-Monitor that qualified people from the area are routinely passed over for jobs in favor of people from Hasakah and other places, leading to rampant unemployment and an exodus of young people; there already were few educated people left after years of oppression and hardship under IS.

A man Al-Monitor met with in another part of the town, Ali Abdulrahman al-Khalaf, railed against the “zero progress, zero results” of the civil council administration’s work in Abu Hamam.

He said that one of the demands of protesters was to have direct contact with the international coalition since they believe that is their only hope for any improvement in the area. He said the SDF gives false information to the coalition, adding, “We are not afraid of the SDF, we are afraid of the coalition after it has been misinformed by the SDF.”

“We are under siege. We, as civilians, can’t go through al-Busayrah,” a town between the Shaitat area and the northern part of the Arab Deir ez-Zor region contiguous to the southern part of the mixed Kurdish-Arab region of Hasakah.

“From Abu Hamam to al-Muammal, where the [Deir ez-Zor civil council] government offices are, this is an area that is dangerous to cross even in your own car” for civilians, he said.

“It’s not Turkey that is besieging us. It’s not Iran. It is the [Kurdish-run] autonomous administration” of the SDF that is “trapping” the local population, he said angrily.