The Deir ez-Zor military council, affiliated with the Syrian Democratic Forces (SDF), has been firing on protesters and believes they are being fed anti-SDF propaganda by the regime of President Bashar al-Assad. 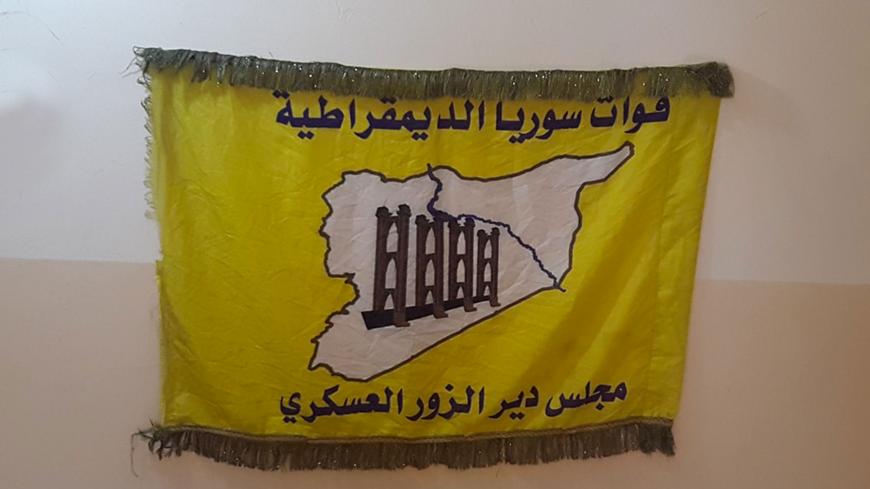 ALEPPO, Syria — Security conditions are deteriorating in the areas controlled by the Kurdish-led Syrian Democratic Forces (SDF) in eastern Syria's Deir ez-Zor province amid ongoing SDF raids and arrests of civilians. At the same time, SDF officials accuse the Syrian regime of working to turn public sentiment against them.

Journalist Suhaib al-Jaber, based in Hasakah province, told Al-Monitor, “The SDF’s constant raids and arrest campaigns have generated a state of frustration and instability for the people, whose businesses and livelihoods have stopped due to this chaos. The SDF's repressive policy against the peaceful movement also played a part in this frustration.”

“Residents accuse the SDF of stealing fuel and failing to spend money on service sectors,” he said. “It seems that neglecting services and not meeting the people’s primary needs is intentional. The largest portions of oil revenues are being allocated to recruiting additional SDF fighters, while people lack the most basic services.”

Local councils affiliated with the SDF have been accused of financial corruption for months, allegedly embezzling funds provided by donors to provide services to civilians. What’s more, local authorities are also accused of stealing the area’s wealth.

Ahmad al-Ramadan, editor-in-chief of the Euphrates Post, told Al-Monitor, “Someone told the residents in Mohaymada that financial aid would be distributed to civilians on the morning of March 8, near the town’s SDF local council. But when the residents showed up, it appeared that was not true. The residents that had gathered spontaneously protested against the SDF and its local council. They called for changing council [members] and accused it of corruption.”

The protesters also decried the deteriorating living conditions, corruption and preferential allotment of aid to the public.

Ramadan added, “Residents blocked the road and set tires on fire. SDF members fired bullets in the air to disperse protesters, to no avail. Then the SDF resorted to its Deir ez-Zor military council, which includes members from the region’s residents, who fired directly at protesters."

Protester Najm Hussein Atwan, a teacher, was killed, and a number of others were wounded.

Several other incidents have occurred recently in the villages dotting the Deir ez-Zor countryside. An SDF-affiliated security force raided a house March 13 in Jadeed Ekedat and stormed a refugee camp in Mohaymada, arresting one person in possession of weapons. The same day, the SDF arrested three teenagers from Rubaida village on charges of blocking roads.

The SDF and its security and military arms impose a tight grip on all aspects of civilian life in the area, and the March 13 arrests came two days after an SDF military patrol in Shafa town was apparently targeted with a roadside bomb. One person was killed and dozens were wounded, including two from the SDF. The origin of the roadside bomb was not determined.

An official source in the Deir ez-Zor military council told Al-Monitor on condition of anonymity, “The regime [of Syrian President Bashar al-Assad] and its allies from the Iran-backed militias mobilized the street against the SDF in their areas of control in Deir ez-Zor. The Syrian regime has close ties with the members of some tribes in the area. These members have been inciting people in the area to rise up against the SDF. This would make it easier at a later stage for the regime to enter the area.”

Nawaf Ragheb al-Bashir, sheikh of al-Bakara tribe — which is close to the Assad regime in Deir ez-Zor — is also a prominent tribal figure in eastern Syria. Bakara tribe members are deployed in the areas controlled by the SDF and those of the Assad regime in Deir ez-Zor. Some say that the regime is likely to have exploited its tribal relations to implement its agendas; if so, this could provide validation for the hypothesis that the Syrian regime is behind at least some of the public mobilization against the SDF in Deir ez-Zor.

Abdulaziz Khalefa, a journalist from Hasakah with the local Baladi Network, told Al-Monitor the SDF is imposing a tight military grip in the areas under its control in northeastern Syria, particularly in Deir ez-Zor. “The SDF has granted the Deir ez-Zor military council broad powers and privileges to suppress any anti-SDF movement,” he said.

Numerous raids and arrests at protests have taken place throughout the province in recent months, including in Abu Haman, Basirah, al-Shuhayl, Abu Hamam, Garanij, al-Izba, Tabqa and Mansoura.

An official from the Deir ez-Zor military council told Al-Monitor on condition of anonymity, “The self-administration in Deir ez-Zor has established several committees in the past days. These committees are expected to hold consultations with the area’s elders, activists and those working in the local councils, with the aim to boost services and living conditions for the people in the SDF-controlled areas of Deir ez-Zor.”

The source added, “The next period will witness numerous administrative measures to promote administrative and service work, as well as to combat corruption in the areas under the SDF’s control. Among the plans to be implemented will be to divide the Deir ez-Zor area into several administrative districts to facilitate the work of the committees and eliminate administrative bureaucracy. The committees are expected to monitor the process to improve services and the economy. They will also work on improving the work of municipalities, funding them and following up on administrative issues to fill the current gaps.”

“The SDF measures in Deir ez-Zor aim to contain the anger of the people and ease the tension between them [the SDF] and the population,” the source concluded.