The Kurdish-led Syrian Democratic Forces (SDF) is requiring Arabs displaced from all Syrian regions who are living in the areas under their control to obtain an expatriate card to be allowed to enter or remain. 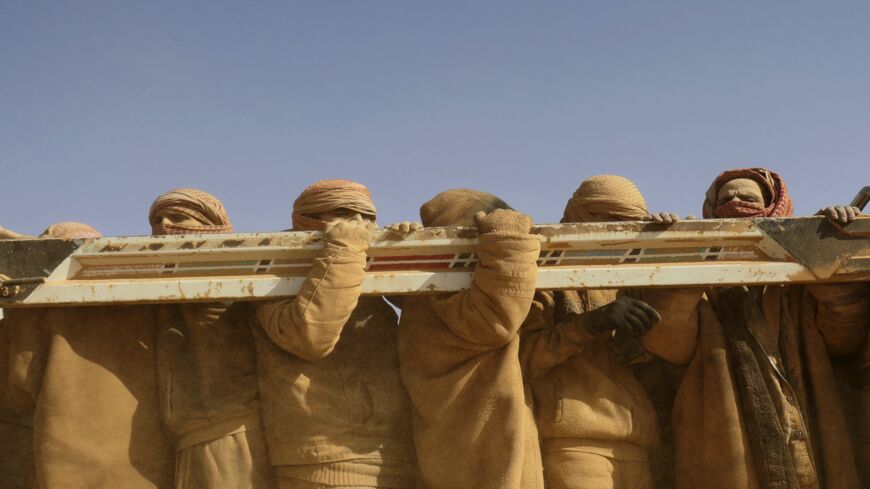 Displaced men stand in the back of a truck after fleeing battles between the Syrian Democratic Forces and fighters from the Islamic State in the Syrian village of Baghuz. They arrive after crossing a desert area to a region controlled by the SDF in the countryside of the Deir ez-Zor province on Jan. 26, 2019. - DELIL SOULEIMAN/AFP via Getty Images

The local authorities in northeast Syria have demanded all Arab refugees from all Syrian regions leave the areas controlled by the Kurdish-led Syrian Democratic Forces (SDF) unless they have a sponsor for their residence.

This step, taken by the local councils of the Autonomous Administration in North and East Syria, comes with the implementation of a law the administration issued on May 27 requiring displaced persons to have a sponsor from among the original population as a condition for the residence in its areas of control. The conditions for such sponsorship differ from one region to another.

The sponsorship requires one of the original residents of the village or town to sponsor the displaced person before the local council by bringing a paper from the self-directed commune designated by the Autonomous Administration, in addition to a lease agreement and a personal photo of the sponsored person.

The SDF also requires displaced persons to obtain an expatriate card to be able to enter or remain in the areas under its control. This card is valid for six months, and the applicant must submit a copy of their ID and the lease agreement, in addition to having a sponsor from the region in which the applicant resides.

Mohammad Hussein al-Khalaf, who was displaced to the city of Hasakah, told Al-Monitor, “This decision means the deportation of a large number of residents in the SDF-controlled areas from their homes to an unknown destination. I came to the city of Hasakah after the Syrian regime forces seized my house in Deir ez-Zor city. I do not know where to go if this law is actually implemented. I live here with my wife, and we are elderly and have nowhere else to go.”

He continued, “A large [number] of the residents of these areas have nowhere else to turn to. The number of displaced people exceeds that of the original population, and this is what makes finding a sponsor impossible. Some of the original residents are now sponsoring families in exchange for a sum of money or for work carried out for them for a meager daily wage. Others are imposing exorbitantly high rents. This is clear exploitation of the displaced persons.”

Khalaf indicated that some of the displaced persons bribe workers in the local council or within the ranks of the SDF to be able to stay in SDF-controlled areas.

Abdul Aziz al-Khalefa, a journalist with the Baladi News website and a resident of Hasakah, told Al-Monitor, “The Autonomous Administration’s decision requiring a sponsor for granting the displaced people a residency permit in its areas was issued when the SDF first took control of the area. This was first implemented in the cities of Qamishli and Hasakah and then extended to Raqqa and Deir ez-Zor.”

He added, “This decision has been stirring resentment, as it does not apply to those coming from outside the area’s provinces only but also to those wishing to change their residence within the SDF-controlled areas. For example, those who want to move from one of the Administration’s cities to another should also have a sponsor from the residents of the area to which they relocate.”

He noted, however, that it is not possible to divide the area into cantons and turn it into separate states, especially in light of tribal and kinship interactions between the four provinces. Khalefa said, “What is making the situation more complicated is that the SDF is granting its members powers that enable them to expel the displaced people and attack them. This has recently happened in the Al-Shuhail area with about 20 displaced families who were attacked by SDF members. Some of those families fled to opposition-controlled areas in Ras al-Ain and others to Turkey.”

Al-Monitor contacted Berivan Khaled, co-chair of the Autonomous Administration, to ask about the Administration’s objectives behind these decisions and the fate of those who cannot secure a sponsor, yet did not receive a response. The Syrian Democratic Council also did not respond to a request for comment.

The decision stirred anger among the residents. Activists from SDF-controlled areas launched a campaign called “Stop the expatriate card” to pressure the Autonomous Administration to renounce its decision. They issued a statement signed by more than 750 people residing in SDF-controlled areas, 400 legal entities, and representatives of Syrian civil society organizations at home and abroad calling for an end to this procedure and refusing the geographic and demographic division of the province and the Syrian regions.

In turn, director of the Syrian Network for Human Rights Fadel Abdul-Ghany told Al-Monitor, “The SDF’s law requiring a sponsor for the displaced people wishing to reside in one of its areas of control is a clear violation of human rights. Both the original population and the displaced people hold Syrian citizenship, and they have the right to move and reside in all Syrian regions. The international law imposes on the de facto authorities to facilitate the movement of civilians between areas subject to the control of different authorities, but it seems that the SDF considers itself an occupying power. It is preventing Syrians from residing in its areas and imposing restrictions on them.”

He continued, “These decisions have humanitarian, social and moral repercussions, as they encourage the extortion of displaced persons and promote favoritism and bribery in order to find a sponsor. This allows SDF members and workers in its affiliated institutions to reap some profit at the expense of civilians, thus ensuring their loyalty.”

Abdul-Ghany concluded, “The displaced people are hit by a dire economic situation with the poverty rate among Syrians rocketing to 80%. Requiring them to find a sponsor adds to their burden and forces them to pay an additional amount of money. All this is for the benefit of the SDF and its supporters."