How Islamic State returned to haunt civilians in northeast Syria

Remnants and cells of the Islamic State have recently increased their attacks against the Syrian Democratic Forces and civilians in the areas under the SDF control in northeast Syria. 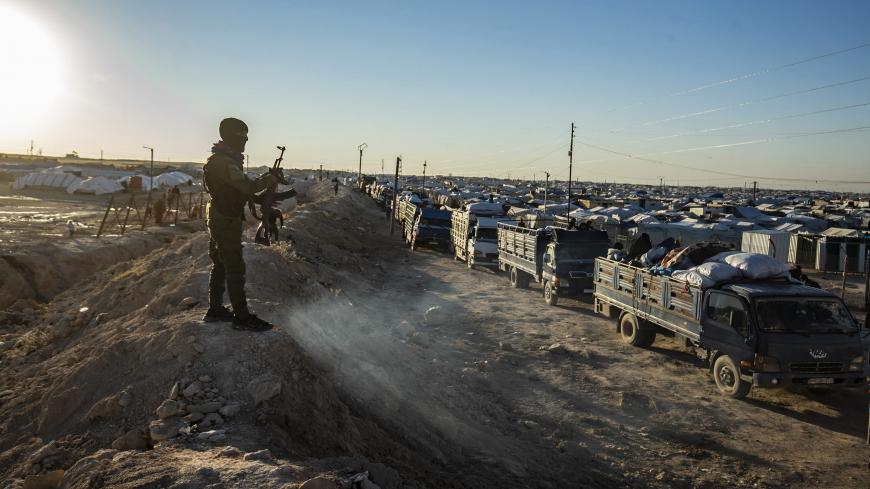 The provinces of Deir ez-Zor, Hasakah and Raqqa, and the Manbij area in the countryside of Aleppo, which are under the control of the Syrian Democratic Forces (SDF), have been subject to a series of attacks by the Islamic State (IS) over the past few weeks. These attacks, carried out by IS-affiliated cells and locals who previously fought with IS, are targeting civilians and SDF members in those areas

IS has stepped up its operations in early 2020 after having faded away since losing its last strongholds in eastern Deir ez-Zor on March 23, 2019. These operations included directly attacking checkpoints and patrols, assassinating SDF members or collaborators, and planting improvised explosive devices (IEDs) on the roads.

IS activity in the areas in the east of the Euphrates is not limited to specific geographical points, but rather stretches across the provinces of Raqqa, Hasakah and Deir ez-Zor, and mostly focus on SDF-controlled areas in the countryside of Deir ez-Zor, specifically the area extending between the cities of al-Suwar and al-Busayrah, as well as the towns of al-Zer, al-Hawaij, al-Shehail and Darnaj.

Orabi Orabi, a researcher on Islamic groups, told Al-Monitor, “IS follows a strategy of striking and draining during the stage of weakening [its opponents]. It adopts two methods of attacks: The first relies on lone wolves, i.e., one person who plans and executes the attack without referring to the leadership, but this rarely happens in Syria. IS in Syria usually resorts to the second method, which is relying on organized cells, especially in SDF-controlled areas.”

Orabi added, “IS is known for its ability to penetrate its opponent’s ranks through the many cells it employs. Most of IS attacks in SDF-controlled areas were carried out against fixed targets, such as military barracks and headquarters. IS is able to perfect such operations due to the large number of cells spread across a wide geographical area.”

IS operations were not limited to SDF military members but eventually evolved to include civilian bodies working with the SDF, such as the local councils responsible for civil services, and employees of the Kurdish-led autonomous administration in northeast Syria, in addition to civilians who are not related to any party. This represents a dangerous development in how these cells operate for the sole purpose of violence and revenge.

IS has also carried out numerous killings against civilians in al-Hol camp and other areas. IS also captured a man who had fought against the group in the past and beheaded him. His body was found in February dumped in front of the municipal council of the SDF-controlled al-Shaheil town in the countryside of Deir ez-Zor.

Saad al-Shareh, a researcher and political analyst, told Al-Monitor, “The security and military operations carried out by IS cells east of the Euphrates increased in 2020 compared to the operations that were carried out in the desert area west of the Euphrates, which is controlled by the regime forces. It seems that IS’ positioning in the southeastern area of Hasakah province extending to the northeastern border of the city of al-Bukamal, which connects with the Iraqi borders, allows IS to carry out security operations targeting people who previously fought against it and those working in the ranks of the autonomous administration and those loyal to it.”

He noted, “Not a week goes by without IS cells carrying out one or a couple of security operations at least, which indicates that it does not find it difficult to implement such attacks because these are not military operations and thus do not require planning and equipping a large number of people with weapons. In 2020, IS no longer targeted the US forces, which were its top enemy in 2019. IS is carrying out such operations to show the world that it did not die out but is rather seeking to regain control of the areas it has lost, by recruiting new fighters. IS aims to prove that all military and security campaigns and the arrests of IS affiliates have failed to curb its activity.”

The Syrian Network for Human Rights (SNHR) documented the killing of 61 civilians at the hands of IS cells, between March 1, 2019, and Feb. 18, 2021, including 10 children and four women, distributed over three provinces — 24 victims in Deir ez-Zor, 34 in Raqqa and three in Hasakah.

SNHR head Fadel Abdul Ghani told Al-Monitor, “IS relies on the grievances of the residents of the SDF-controlled areas, taking advantage of the SDF's violations against civilians and the SDF stealing the resources of those cities such as oil and selling it to the Syrian regime in order to recruit cells and carry out operations against the SDF forces and headquarters, often causing the death of many civilians in those areas.”