Islamic State is applying Sharia rules in the eastern countryside of Deir ez-Zor and imposing taxes on residents by force of arms. 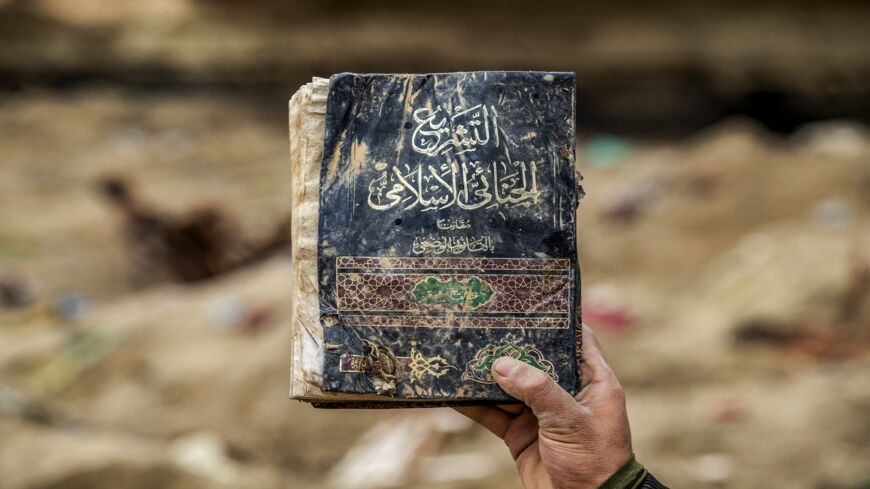 A fighter from the Syrian Democratic Forces carries a book on Islamic criminal legislation said to have belonged to the Islamic State, recovered in the eastern Syrian village of Baghuz on March 13, 2020, a year after the fall of the Islamic State caliphate. - DELIL SOULEIMAN/AFP via Getty Images

The Islamic State (IS) carries out almost daily operations in Deir ez-Zor against the Kurdish-led Syrian Democratic Forces (SDF) and the civilians it accuses of cooperating with the Kurdish forces. IS is also imposing taxes on shop owners, doctors and others by threatening them with murder and kidnapping via WhatsApp messages.

Furthermore, IS is constantly attacking Kurdish forces' checkpoints and barricades, forcing the SDF to retaliate with large-scale security and military operations against its cells in eastern Deir ez-Zor.

On Dec. 14, 2021, IS claimed responsibility for separate attacks that targeted SDF checkpoints in the eastern countryside of Deir ez-Zor, in addition to a command headquarters in al-Jarthi east of Deir ez-Zor.

On Dec. 13, 2021, the SDF — supported by the US-led international coalition — carried out a security operation in the east of the country, killing five people. In a statement regarding the incident, the SDF said the raid that took place near al-Busaira targeted a hideout used by “a dangerous cell of the terrorist” armed group IS.

The SDF indicated that the cell's location was raided with US air support, explaining that members of the terrorist cell opened fire and SDF forces responded, which led to the killing of five members of the cell. “Most of them were wearing explosive belts,” the statement added.

The Syrian Observatory for Human Rights reported that four people were killed in the exchange of fire, including a man, his two sons and his son-in-law, who is likely to be the main wanted person in the operation.

The observatory noted that two of them were killed by helicopter gunfire. “SDF arrested arms dealers and others suspected of belonging to the extremist organization.”

Syrian journalist Zain al-Abidin, who lives in Deir ez-Zor's eastern countryside, told Al-Monitor, “IS launches almost daily operations here with explosive devices and attacks against SDF members, patrols, checkpoints and civilians suspected of cooperating with the SDF. IS also forces the local traders, investors in oil wells, livestock owners and doctors to pay it a tax, threatening to kill those who fail to pay. IS is also killing anyone practicing witchcraft or suspected of selling drugs. In the last two months of 2021, it ramped up its attacks in this region. The largest strongholds of its cells are the towns of Dhiban, al-Hawaij, al-Zar and al-Shuhail.”

Abidin noted that west of the Euphrates in Deir ez-Zor, IS attacks have become limited, well calculated and restricted to explosive devices and missile attacks that target Syrian regime positions. He added, “IS always moves in small groups, where each group has its own commander who has his own vision. The situation of IS in the [eastern] countryside of Deir ez-Zor differs from its situation in the Syrian desert where supplies and transportation are difficult. In the desert, IS relies on individuals to supply it with food or sometimes attacks shepherds to secure food.”

Abidin does not believe the new IS leadership is the reason why the group has intensified its activities. “A new leadership has nothing to do with the frequency of operations,” he affirmed. Rumors circulated about IS appointing a new leader for what it calls Wilayat of Syria, though IS has not provided any statements on that.

Jusoor Center for Studies researcher Abbas Sharifa, who resides in Turkey, told Al-Monitor, “There are several reasons that make IS more active in Deir ez-Zor. These include the fragile security situation there, where the Syrian regime and the SDF are struggling over power control and the weak role of the local community. Moreover, IS is imposing taxes on oil traders in this oil-rich region to achieve self-financing.”

“There is no doubt that any new IS leadership would try to prove itself by intensifying its operations. This, however, requires active cells, a database of events, logistical support bases, and protection and security measures,” Sharifa said.

He indicated that IS is imposing its religious teachings in the countryside of Deir ez-Zor, which reflects the local community’s inability to resist it amid the regime and the SDF’s control of the province.

“By intensifying its activity, IS is sending a two-way message,” Sharifa said. “The first is aimed to motivate its members to ramp up their activities in the region, and the second is to threaten and intimidate its enemies.”

Many reasons could allow IS to boost its energy and regain strength in this region, including the fact that the international coalition has cut back on its attacks, he said. “IS is tapping into Iran’s expansion and missionary activity to spread Shiism in the region, which is a major provocation to the local community. It is also taking advantage of the absence of a just political solution that brings peace to Syria in general and to the region in particular.”