​​Islamic State cells are imposing levies on oil investors who have been contracted to work in oil fields in agreement with the controlling forces in northeastern Syria, as a share of the oil investment in a bid to finance their activities. 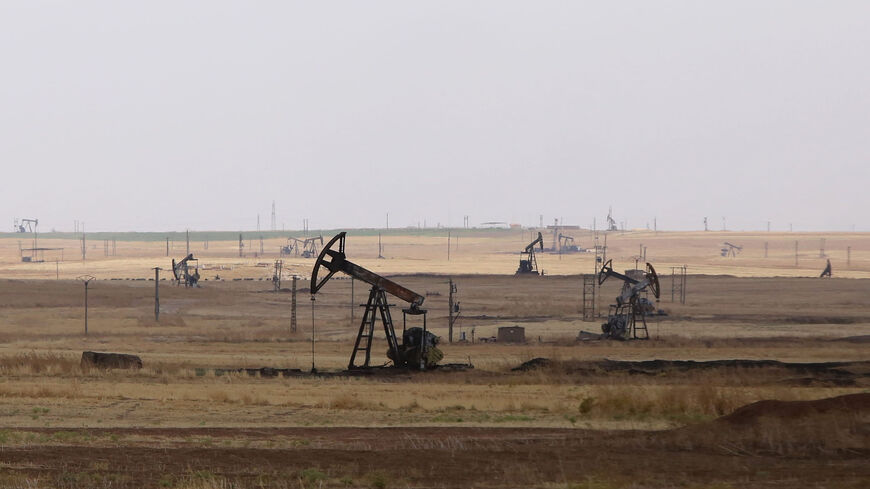 Islamic State operatives stormed Dec. 15 into the Syrian Democratic Forces-affiliated Subaihan oil field in the eastern countryside of Deir ez-Zor province and threatened to kill the field workers if the investors did not pay a fine for oil production, which amounts to about 20% of the oil production.

On Dec. 3, an IS explosive device targeted a bus carrying workers on their way back home in the countryside of Deir ez-Zor from the Kharata oil field, located 20 kilometers (12 miles) southwest of Deir ez-Zor in eastern Syria, which is controlled by the Syrian government. The attack killed 10 people and wounded others.

Al-Sharqiya 24 network reported Oct. 29 that IS operatives stormed into the Abu Habba oil field in the northern countryside of Deir ez-Zor, after requesting oil investors to pay them a share of the oil investment in the field.

In October, IS launched an attack on the Syrian regime forces in al-Taym oil field in the south of Deir ez-Zor province, firing with RPGs and heavy machine guns.

This was followed by violent clashes with machine guns between the Syrian government forces that were present in the field and IS militants, which resulted in several deaths and injuries in the regime ranks.

In July, IS operatives attacked the Daas oil field located in the northern countryside of Deir ez-Zor, beating the guard and threatening them to force the investors to make the payment.

Ahed Slebi, a journalist working with the Naher Media Network covering news from eastern Syria, told Al-Monitor, “IS militants did not only impose levies on oil investors, but they have been threatening and chasing down all the area’s rich, traders and workers in the Autonomous Administration’s institutions, in a bid to establish a logistic supply base in terms of oil and funds. The oil fields are IS’ main focus because they are lucrative.”

The areas of northeastern Syria have recently witnessed an uptick in IS attacks, killing dozens of regime forces soldiers, and militants affiliated with Iran and the SDF.

On Nov. 14, the Syrian Observatory for Human Rights said that 18 members of the regime forces were killed including a brigadier general and four soldiers, in addition to 13 members of al-Shaitat clan that is loyal to the Syrian regime in several areas in the Syrian desert, in attacks launched by IS cells on sites and local groups affiliated with the clan.

The spokesman for the international coalition said in exclusive statements to North Press that IS cells have escalated their attacks against civilians to undermine stability in northeastern Syria.

Orabi Abdel Hay Orabi, an expert on Islamist groups, told Al-Monitor, “The military operations launched by IS in northeastern Syria target the control of the areas on their ground and figures close to them.”

He said, “Despite being fought by all sides, IS appears to be making progress because the group has managed to regain the element of surprise in its attacks. IS militants are very familiar with this vast area with many mountains, valleys and caves. They have also recently been keen on following the raid strategy in combat, which means moving small groups and using light weapons, and strike and withdraw immediately."

Orabi added, “This is not to mention the planting of mines around the regime’s vital sites such as oil wells, phosphate sites, military sites and main camps that include supply and transportation bases, which turned these locations into dangerous areas."

In October 2019, the US Department of Defense announced that it planned to strengthen its military presence in northeastern Syria to protect the oil fields there from falling again into the hands of IS.

Washington considers the oil fields in Syria as a major source of revenue for the terrorist organization.

Newsweek magazine quoted a high-ranking official in the Pentagon as saying that the United States intends to send 15 Abrams tanks for the protection of oil fields in eastern Syria, pending White House approval.

It appears that IS found the Pentagon's statement as reflecting the United States unwillingness to continue to protect the oil wells, which means an opportunity for the organization to finance its activities once more.

Abbas Sharifa, researcher at Jusoor Center for Studies, said the uptick of IS operations in northeastern Syria is the result of SDF reluctance in cracking down on IS operatives and turning a blind eye to their activities because their presence is directly related to the project of fighting terrorism.

“The SDF is also not harmed by these attacks that target oil investors, and therefore won’t affect its share from oil production,” he added.

Fadel Abdul Ghany, head of the Syrian Network for Human Rights, condemned the SDF’s complicity with IS and its failure to carry out the mission for which it claims to exist, which is fighting terrorism.

“Eliminating IS means the SDF’s presence is no longer required, which pushes the SDF to condone the group’s activities and even facilitate it. The SDF is also stealing oil proceeds to fund the Kurdistan Workers Party that is designated as a terrorist group. All this is happening under US cover, the main mission of which is to fight terrorism and protect the resources of these areas in Syria,” he told Al-Monitor.