Islamic State cells have been active in the areas controlled by the Kurdish forces in the countryside of Deir ez-Zor, forcing business owners to pay taxes under the pretext of zakat. 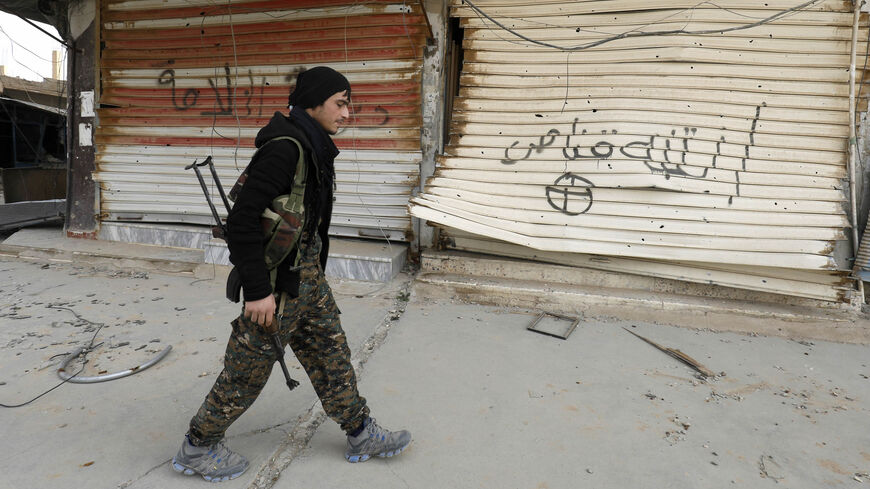 A fighter from the Syrian Democratic Forces (SDF) walks past shops with their fronts painted with the Arabic phrases "beware a sniper" and "caliphate state," after the Kurdish-led and US-backed SDF retook the city from Islamic State fighters, Hajin, Deir ez-Zor province, Syria, Jan. 27, 2019. - Delil Souleiman/AFP via Getty Images

ALEPPO, Syria — The areas controlled by the Kurdish forces in the countryside of Deir ez-Zor province in northeastern Syria have recently witnessed growing activities by Islamic State (IS) cells, which are terrorizing business owners and forcing them to pay "zakat" (obligatory charitable payment).

On Oct. 3, IS militants blew up a money exchange and money transfer shop called Al-Iman Office in the town of al-Azbah, in the northern countryside of Deir ez-Zor, after its owner refused to pay zakat. No casualties were reported, but the shop was severely damaged.

One of the shop owner’s relatives told Al-Monitor on condition of anonymity, “IS members detonated an explosive device they had planted in front of the office located in the popular market in al-Azbah, after the owner refused to pay zakat as demanded by IS.”

He said, “In early September, IS members reached out to the shop owner via WhatsApp, requesting him to pay a specific amount as zakat. He did not respond to their request so they planted an explosive device [near his shop] on Sept. 25, which failed to detonate. Hours before their second attempt on the evening of Oct. 3, they had sent him a message threatening to kill him and destroy his office because he had not paid zakat.”

The source noted, “Fortunately, the explosive device went off while the office was closed, and no one was injured in the explosion.”

Speaking about the first attempt targeting the shop owner, the source said, “A patrol affiliated with the Syrian Democratic Forces [SDF] dismantled the explosive device that was intended to detonate next to the shop after the SDF was informed by the townspeople that there was a strange object in front of a money exchange shop in the center of the market.”

The residents of the countryside of Deir ez-Zor, which is under the control of the Kurdis-led SDF, are living under the constant threats of IS cells. As the group has been terrorizing business owners to pay zakat, threatening to kill them if they don’t, IS cells have escalated their activities against SDF members and anyone who works with the SDF.

A livestock dealer in the eastern countryside of Deir ez-Zor told Al-Monitor on condition of anonymity, “IS forced me to pay $500 as zakat because I work in the livestock trade.”

He said, “An IS member contacted me via WhatsApp asking me to pay zakat and threatening to kill me if I refused. He also warned me against reporting the incident to the SDF’s security authorities, otherwise he would go after me and my family.”

The dealer added, “I agreed to pay $500 out of fear for my family’s well-being. The person who contacted me told me that a woman affiliated with IS would come to my house to collect the money and hand me a paper bearing the group's stamp, and that is what happened.”

IS' official Al-Naba weekly newspaper reported Oct. 7 that IS cells carried out 68 operations between Aug. 7 and Oct. 5 in Syria alone. The group’s announcement was followed Oct. 10 by the killing of an IS militant in a US drone strike in the village of Hamam al-Turkman, in northeast Syria. Earlier on Oct. 6, the US military announced the killing of three IS officials in separate operations in northeast Syria.