After the ouster of the Islamic State from the oil-rich Deir ez-Zor province in eastern Syria, several issues are expected to complicate efforts to stabilize the region. 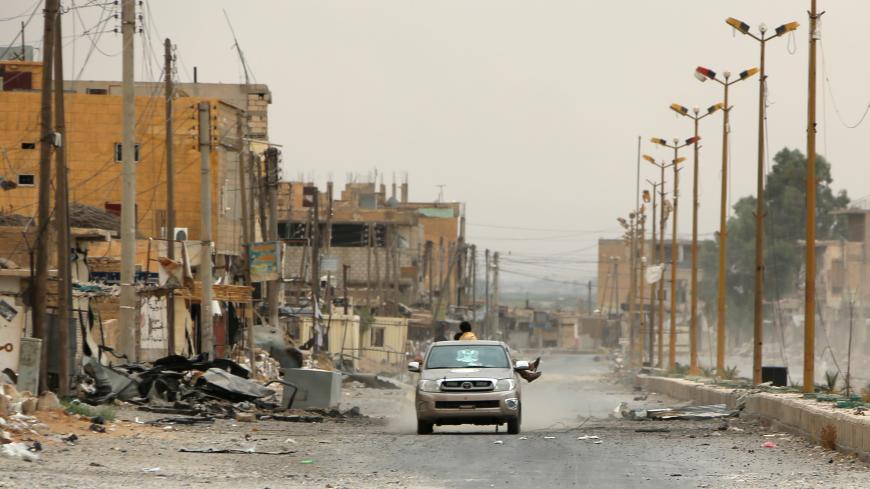 A car drives through a damaged street on the outskirts of Deir ez-Zor, Syria, Sept. 24, 2017 - STRINGER/AFP/Getty Images

Located in eastern Syria, Deir ez-Zor lies alongside the strategic border with Iraq. Part of Islamic State (IS) territory, the region is the focus of attention from forces loyal to the regime of Syrian President Bashar al-Assad and the US-backed, Kurdish-dominated Syrian Democratic Forces (SDF). With IS’ downfall, control over the region will require the collaboration of the tribes dominating the Deir ez-Zor landscape, a process complicated by local dynamics and possible intertribal strife.

Since September, SDF forces and pro-regime forces have been increasingly fighting to expand their zones of influence. According to a report by the Institute for the Study of War (ISW) issued Sept. 27, Russia installed a bridge over the Euphrates River, allowing pro-regime forces to cross the river after conducting overnight airstrikes against SDF positions near Deir ez-Zor city. The strikes came one day after the SDF-affiliated Deir ez-Zor Military Council asserted that its fighters would resist efforts by pro-regime forces to cross the Euphrates River in eastern Syria, according to the ISW.

Despite the fact that US-backed coalition forces appear to be focusing on fighting IS, the expansion of the SDF is a sign that the United States intends to maintain a zone of influence in eastern Syria. “The US calculates that it does not only intend to liberate the region from IS, but also prevent the group’s comeback as it was previously the case in Iraq,” Bassam Barabandi, who recently co-authored a paper on Deir ez-Zor tribes in October for the Center for a New American Security (CNAS), told Al-Monitor. US ambitions could be seen as a direct threat to Russia’s Iranian ally, which is seeking to expand its foothold in the region neighboring Iraq to ensure a continuous corridor from Tehran to Beirut via Damascus.

In this dangerous game, regional and international players will have to regain the trust of Deir ez-Zor tribes that constitute the region’s main social and political fabric. According to a report by the Justice for Life Organization (JFLO), there are several prominent tribal confederations, the most important being the Egaidat confederation, which includes Bu Kamal, Bu Kamil and several subtribal affiliations. The Baggara is another important confederation, explained Eyad Kharaba, a Deir ez-Zor activist who spoke to Al-Monitor. According to the JFLO, the latter confederation incluldes Abeed, Sultan and Abed.

With the 2014 IS onslaught on eastern Syria, some tribal groups accommodated the terrorist group. Most of the fighters from these tribes who joined IS did so for economic reasons ranging from salaries to economic incentives linked to trade and oil revenues or smuggling activity. They were also motivated by power or fear of coercion, explained Kharaba. In addition, the presence of IS leaders in Deir ez-Zor from the Bakir and Albu Azaddeen tribes of the Egaidat confederation encouraged hundreds of youth from these tribes to join IS, according to the CNAS report.

With IS at a disadvantage, both Russia and the regime on one side and the Kurds on the other are attempting to lure the Deir ez-Zor tribes into their orbit.

Russia appears to be spearheading the effort. In a recent tweet, Syria expert Hassan Hassan said the Russians had met with prominent Deir ez-Zor factions.

“The regime has been able to recruit Nawaf Bashir, one of the most prominent sheikhs from the Baggara tribe and a former member of the opposition,” noted Barabandi.

According to Kharaba, the regime has placed several powerful tribal leaders as members of parliament to guarantee their loyalty.

Yet outreach efforts by regional actors toward tribes in Deir ez-Zor may be complicated by several factors. In the last decade, the Assad regime’s policies toward eastern tribes — policies that created new leaderships through a system of political and economic favors — have contributed to fragmenting the tribal fabric, a trend that was later exploited by IS. “The terrorist organization relied and promoted young tribal leaders at the expense of more powerful traditional figures,” said Barabandi.

Another issue that may hinder the stabilization efforts in Deir ez-Zor hinges on which forces will be deployed there. According to Barabandi, the Iranians have sought for years to convert tribes around Deir ez-Zor city to Shiism. “The local population is suspicious of Iranian intentions, and a deployment of their forces in Deir ez-Zor could herald an insurgency and a possible return of radicals or al-Qaeda,” Sheikh Daham Mounadi, a member of the Egaidat tribe, told Al-Monitor.

With support of the regime’s intelligence, since the US invasion of Iraq in 2003, Deir ez-Zor has been a pathway for jihadis to Iraq. Continued oppression of the local population and Iran’s insistence on increasing its presence in the border area could fuel once again jihadi flames, argued Barabandi.

The United States’ heavy reliance on the Kurds constitutes another complication in the stabilization of the eastern regions. On Sept. 23, the Kurdish-led, US-backed Syrian Kurdish-Arab alliance announced the formation of a civilian council to govern Deir ez-Zor city, which it had captured from IS.

Yet Barabandi believes that the Kurds will not allow the rise of a strong central Arab figure, which can explain the Kurdish decision to arrest Ahmad Dahmi, who is from the Baggara tribe and was working with the SDF. “The Arab population is suspicious of Kurdish intentions in the region and will not accept their governance,” added Kharaba.

This fragmented eastern landscape, combined with IS’ continuous crackdown on tribes in the past three years, could lead to a resurgence of intertribal conflict. In 2014, IS killed over 700 members of the Shaitat tribe. “Intertribal and revenge killings constitute the most immediate threat for Deir ez-Zor,” said Kharaba.

Putting in place a functional leadership structure is thus essential in preparing for the post-IS phase. “A council encompassing 200 prominent figures — tribal leaders and activists — could create the necessary momentum to stabilize the region,” said Barabandi.

Yet control over the border region may prove a challenging task for local and regional powers competing for IS territory in the absence of a legitimate power capable of rising above the fray.