Syria's Assad seeks support of tribes against US, others

Regime forces are recruiting Arab tribes to fight against the presence of US and other foreign troops in Syrian territories. 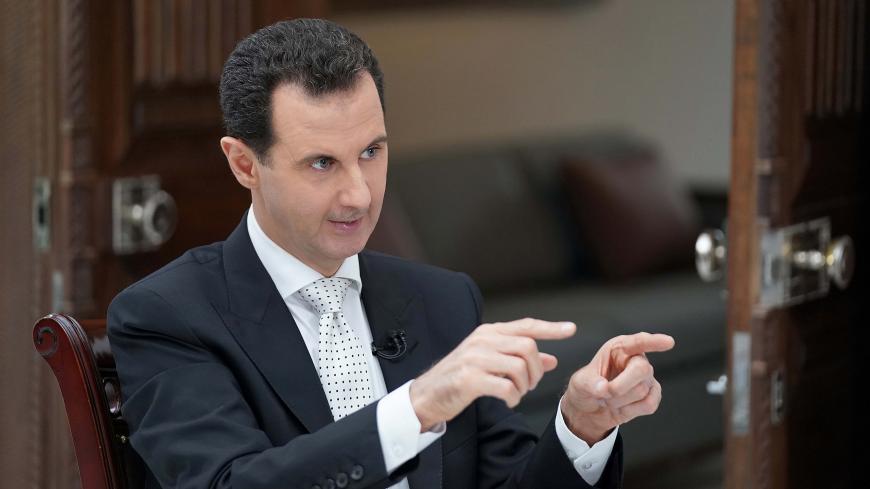 Syria's President Bashar al-Assad gestures during an interview with a Greek newspaper, Damascus, Syria, May 10, 2018. - SANA via Reuters

As the Syrian regime, backed by Russia, is on the verge of taking control of the remaining opposition-held areas in southern Syria, Damascus is trying to mobilize Syrian tribes against foreign forces, including those of the United States, in the country's east.

Regime forces seized the Nassib crossing on the border with Jordan July 6. The next day, some 55 Arab and Kurdish tribes meeting in Aleppo declared their total support for the “Syrian Arab Army, led by President Bashar al-Assad, to confront the Turkish aggression and its supporters, namely the US, France and others.”

Back on June 2, around 70 Syrian tribal members and leaders in Deir Hafer city, in northern Aleppo province, announced they were forming a force called the Popular Tribal Resistance Units. The closing statement of that conference said pro-regime units aim to “resist the US, French and Turkish presence in eastern Syria and reject any presence or intervention of military forces of any state on Syrian soil without the government’s approval and coordination."

It added, "The Popular Tribal Resistance Units will be a real backbone for the Syrian army.”

US and French forces are deployed east of the Euphrates River — where tribes are mostly concentrated — as part of the international coalition that began operating in 2014 to expel the Islamic State (IS) from Iraq and Syria. The forces are active in three ethnically and demographically diverse provinces in eastern Syria: Raqqa, Hasakah and Deir ez-Zor.

The Supreme Council of Syrian Tribes and Clans was established in 2015 with representatives of Syrian tribes and clans to unite their visions and build a new Syria. Madar al-Assaad, the council's official spokesperson, said about 80% of the citizens in Hasakah are Arabs and Syriacs, while in Raqqa, Arabs constitute 98% of the population. In Deir ez-Zor, virtually all of the citizens are Arabs.

More tribes and clans in regime-held areas are holding conferences to express their support for the regime and their rejection of foreign forces in Syrian territories, particularly east of the Euphrates. In April, Liwa al-Baqir, a pro-regime tribal faction operating in Aleppo and its countryside, launched military operations to expel the United States from Syria.

Liwa al-Baqir’s move came as US Secretary of Defense Jim Mattis announced in April that France sent soldiers to enhance the US presence in northeast Syria to help the international coalition fight IS.

During the Syrian conflict, various disputing armed forces have sought to establish alliances with tribes, given their power and influence and because they constitute a major component in Syrian society. As a result, many tribes have become internally divided, weakening the power of their leaders. Amer Jassim al-Bashir, the Baggara tribe’s sheikh in Deir ez-Zor, had supported the opposition before he defected from it and pledged loyalty to the regime. The tribe, considered one of the largest in Syria, was thus divided.

While the regime is trying to lure tribes to its side, Arab tribes and clans opposing the regime are getting ready to hold a general conference in the Turkish capital of Ankara, though no date has been determined.

Sheikh Faisal al-Sultan, a member of the pro-opposition Supreme Council of Syrian Tribes and Clans, told Al-Monitor the regime’s efforts to form a tribal force against the United States and other foreign forces “are a form of propaganda in light of the international momentum toward tribes."

He added, "The regime wants to say that tribes are on its side. However, for seven years, the regime couldn't mobilize tribes in battles against the opposition and failed to form tribal forces to support it in battle.”

Several regional players are involved in the Syrian arena. Turkey is trying to mobilize tribes and unite them in northern Syria. Ankara also allowed a conference for tribes to be held in Istanbul in December 2017 in the presence of Kurdish and Turkmen tribes from Syria.

Also pointing to regional and international competition is the increasing Saudi activity in areas controlled by the Syrian Democratic Forces (SDF) in northern Syria. Saudi Minister of State Thamer al-Sabhan visited the area in October 2017 to discuss eventual reconstruction.

There are signs that Kurds, and more specifically the People’s Protection Units (YPG) fighting under the SDF umbrella, are most likely to side with the regime in Hasakah. The United States, once the SDF’s main backer, and Turkey reached an agreement in June to manage Manbij in northern Syria and expel the YPG. Kurds might have felt abandoned by the United States even before that, when Turkey took over Afrin with no US opposition.

Tribal leader Bashir told Al-Monitor, “Kurds’ relations with the Syrian regime have developed. The regime is seeking to open a security zone in Deir ez-Zor and Raqqa.”

He noted that the regime wants to use this relationship with the Kurds to “encircle the tribes refusing Kurdish presence in Deir ez-Zor, where the SDF and the Syrian regime each control wide stretches of the province after its liberation from IS.” The Syrian regime controls areas west of the Euphrates, while the SDF is active east of the river.

According to Bashir, his Baggara tribe is one of the largest Syrian tribes, with an estimated 2 million members. Most of them are in Deir ez-Zor, but a large part of the tribe’s influence and geographical presence extends from Raqqa to Hasakah, which are under the SDF's complete control. Still, the tribe hasn't joined SDF ranks.

Three tribes form the demography of oil-rich Deir ez-Zor, on the border with Iraq: Baggara, whose presence extends geographically along a western line toward Raqqa; Alaqidat, whose influence extends toward al-Bokmal in the southeast; and Al-Busraya, which is active toward Raqqa in areas east of the Euphrates.

"The regime won’t be able to break the alliance between the Kurds and some of their allied Arab tribes in the SDF because these tribes consider the regime an enemy,” Bashir said. However, “this alliance is temporary and baseless. It can disintegrate at any minute. The Kurds [specifically, the YPG] are a de facto force present due to the US [support]. Besides, Arab tribes are afraid the regime might take the place of the Kurds if they are expelled from the province [Deir ez-Zor], due to their [tribes'] weakness.”

Tribes have suffered heavy casualties in their fight against IS, and many members have fled the war. They also lack the armament that would allow them to enter a wide-scale military confrontation.

The ongoing Syrian conflict and the regional competition keep possibilities open for the future of eastern Syria. More foreign forces are joining the fight, and there is talk about an Arab force entering after US forces withdraw. But most tribes in these areas “will not return to the regime’s control and won’t agree to work with it indefinitely," Assaad said.

"Tribes siding with the regime constitute less than 10% of Syrian tribes, while those supporting the revolution constitute 70%. Meanwhile, 20% of tribes have kept mum,” he added.