Saudi Arabia is backing Kurdish efforts to win over Syrian tribes' loyalty from the regime. 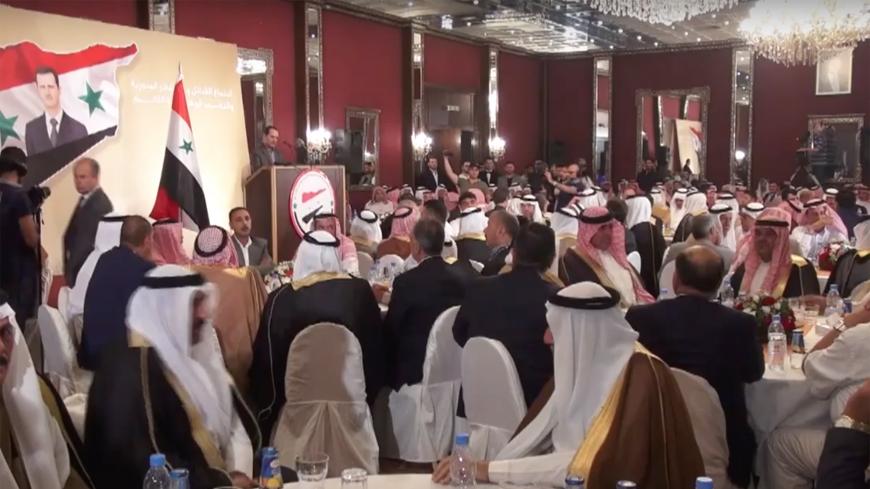 Tribal leaders from Syria attend a conference, which was also attended by the head of the military security branch of Bashar al-Assad's government in the northeastern city of Hasakah, Aleppo, Syria. Posted June 20, 2019 - Youtube/Syrianarabnewsagency

LOpposing forces are competing for the support of tribal leaders in eastern Syria, with each side accusing the other of trying to further divide the country.

Mohammed al-Janduli, head of President Bashar al-Assad's military security branch in the northeastern city of Hasakah, called on Arab tribal chiefs to attend a June 20 conference in Aleppo. More than 50 members of tribes east of the Euphrates River were invited to the meeting and attendees expressed their support for Assad, according to the state-sponsored Syrian Arab News Agency. SANA didn't say how many leaders actually attended.

The conference came in response to the unexpected visit June 13 of Thamer al-Sabhan, Saudi minister of state for Middle East affairs, to Deir ez-Zor, where he met with Kurdish leaders, US Deputy Secretary of State Joel Rayburn, US Ambassador William Roebuck and a number of Arab sheikhs and dignitaries.

During his visit, Sabhan called on Arab tribes to join forces with the Kurdish-led Syrian Democratic Forces (SDF) to prevent the return of the Islamic State (IS) and end the protests that broke out in Deir ez-Zor after the SDF liberated it from IS in March.

The Arab-dominated towns and villages in eastern Deir ez-Zor province have been protesting Kurdish rule since April 20 in light of deteriorating security conditions and price increases, according to the Syrian Observatory for Human Rights. SDF spokesman Mustafa Bali accused the Syrian government of fueling the protests.

Abdul Hamid al-Mehbash, co-chair of the Kurdish self-administration area in northeastern Syria, told Al-Monitor, “Sabhan discussed the latest developments in the region and stressed his country's support for the stability of northeastern Syria. He called on the Arab tribes to support the SDF to maintain stability and security. Tribal leaders asked him in return to recognize the political representation of the Arab tribes to ensure their participation in resolving the Syrian crisis.”

Jesr Press, which is close to the opposition, reported June 20 that the Saudi Foreign Ministry asked the head of the opposition’s Syrian Negotiation Commission, Nasr al-Hariri, to prepare to hold a conference called Riyadh III that would lead to a new negotiating committee to include the SDF.

A political activist from the Shammar tribe in Deir ez-Zor told Al-Monitor on condition of anonymity, “The Saudi official asked the dignitaries of the Arab tribes to support the Kurdish self-administration, but said this doesn't mean [there will be] sovereignty of Kurds over the Arab tribes. He also warned the tribes of the consequences if they refuse to cooperate with the SDF, noting that his government supports the Kurdish project.”

Journalist and human rights activist Rana Habash al-Ahmadi confirmed to Al-Monitor that, in an effort to restore confidence among Kurds and Arab tribes in the east, especially in Deir ez-Zor, the SDF allowed 800 women and children from IS families to leave al-Hawl refugee camp east of Hasakah and head to Raqqa and Tabaqa.

Ahmadi pointed out that some of the families are still influenced by IS ideology, which is why they will be "rehabilitated" at nongovernmental mental health centers so they can reintegrate into their communities.

She added, “The SDF organized a Syrian tribes forum in the town of Ain Issa, northwest of Raqqa, on May 3 in the presence of SDF leaders and representatives of the Arab tribes, to contain the wave of popular protests the latter launched in Deir ez-Zor.”

Ahmadi said, “There were reports of US efforts to contain the Arab-Kurdish tension by meeting the demands of the Arab tribes to improve services and infrastructure and to [allow the tribes to] benefit from the oil revenues in the areas where they are located." She alleged that the visit by Sabhan, the Saudi minister, "aimed to … face a plan by Russia, Turkey, Iran and Qatar, in coordination with the Syrian regime, to polarize the Arab tribes and provoke an Arab-Kurdish conflict that could give power to IS once again.”

Moscow and Damascus, on the other hand, criticized the Ain Issa forum and said it aimed to divide the country.

Elham Ahmed, co-chair of the SDF Executive Council, told Al-Monitor, "The tribe forum held in Ain Issa was successful, and demanded a democratic Syrian Constitution representing all components of the Syrian people. The negative statements made by the Russians and the regime against the forum are proof that it achieved its desired objectives.”

Organizers of the May 3 forum, which was attended by 5,000 dignitaries of 60 Syrian tribes, expressed in an official statement its support of the SDF and the unity of Syria, and of ending what they called the Turkish occupation of Syrian areas.

Syrian writer and journalist Firas Allawi said recently on Syria Television that there is a US-Saudi agreement to adjust allegiances east of the Euphrates by turning the page on IS and trying to get on the tribes’ good side. He said the agreement also aims to "prepare the area for the possibility of conflict with Iranian militias on the opposite side of the Euphrates River, where those militias control areas inhabited by some tribes." The United States and Saudi Arabia are also "making promises to offer military and political support to recover in the event of such a conflict.”

Allawi added, “Sabhan’s visit to the tribes of Deir ez-Zor was to support the Americans in establishing a buffer zone" in the region adjacent to Turkey between the Arabs and Kurds.