The United States, Britain, France and Saudi Arabia are seeing eye to eye on proposals to secure northeastern Syria. 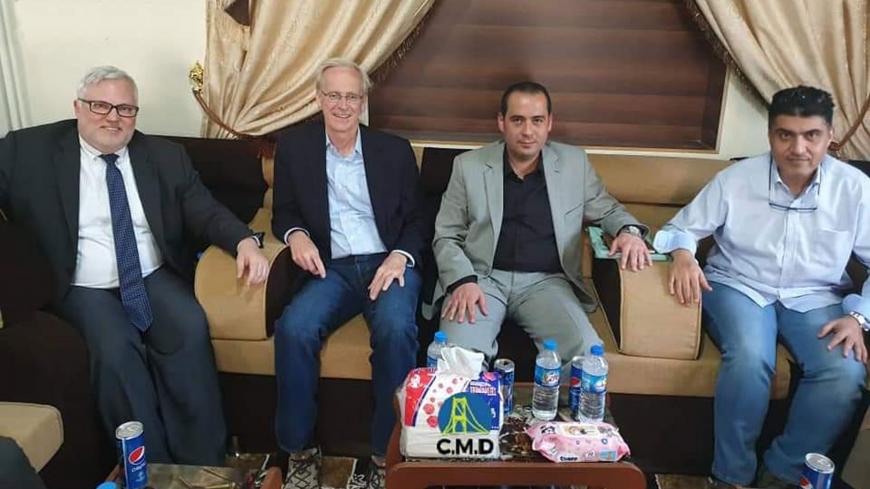 QAMISHLI, Syria — Following a flurry of high-level meetings in Syria between Kurdish and foreign leaders, it seems some progress is being made on stabilizing the country's northeast region.

Officials met July 13 in Ain Issa, including William Robak, a US adviser to the global coalition forces, and leaders of the global coalition against IS. On July 9, Robak and US special envoy to Syria James Jeffrey had met with officials of the Civil Council of Deir ez-Zor, which is affiliated with the self-administered Rojava area. Also attending were elders of Arab tribes in the area of al-Omar oil field east of Deir ez-Zor.

Those meetings followed an international conference held July 6 to 8 in Amouda regarding the burden presented by an estimated 14,000 IS members detained by the SDF in Kurdish-run prisons and camps. That conference drew 200 foreign and Arab academics, politicians, experts and former diplomats and specialists on the issues of terrorism, in addition to Kurdish officials. They discussed the possibility of establishing an international court in Syria to try the prisoners.

Saudi Minister of State for Gulf Affairs Thamer al-Sabhan also visited Deir ez-Zor and Raqqa, on June 13. Sabhan met with US Deputy Secretary of State Joel Rayburn, US Ambassador William Roebuck and a number of Arab sheikhs and dignitaries. Sabhan called on Arab tribes to support the US-backed, Kurdish-led SDF to maintain stability and security in the area and ensure IS doesn't make a comeback.

Jeffrey had called July 7 on the global coalition countries to send ground troops to northeast Syria to compensate for a potential US troop withdrawal. So far, France and Britain have agreed, Germany has declined and Italy and Denmark are considering the request.

Melissa Dalton, a senior fellow and deputy director of the International Security Program at the Center for Strategic and International Studies in Washington, warned that in tandem with a US withdrawal from Syria, IS will make a strong comeback.

In a July 2 interview with Foreign Policy, she warned, “Without US or allied support to sustain the security and stabilization gains the coalition has made,” IS will “reconstitute and be able to take territory.”

“The US wants these forces to run [a planned safe zone in northeast Syria] if Washington withdraws its forces from Syria. Jeffrey told the Arab tribes and officials of Deir ez-Zor military council that his government is seeking a political balance in northeastern Syria and will prevent attacks on the safe zone. Jeffrey was certainly referring to [attacks by] Turkey," Ahmadi said. "Washington wants to keep Ankara from achieving its plan to occupy the area east of the Euphrates.”

A media center affiliated with the Deir ez-Zor Civil Council published a statement July 9 on Facebook indicating Jeffrey had said at the oil field meeting that the United States supports northeast Syria at the political, military, economic, health and education levels. He promised that the area will be fairly represented in negotiations for a political solution to the war.

Lebanese newspaper al-Modon reported the same day that Washington is reactivating the US-backed Revolutionary Commando Army, whose fighters mainly hail from Deir ez-Zor. Al-Modon added that the global coalition forces announced military drills with heavy weapons, including remote artillery and rocket launchers in the Tanf area on the Iraqi-Syrian-Jordanian border, with the commando army's participation. It said the army will be recruiting and establishing training camps for new members in Jordan.

The newspaper added that the Revolutionary Commando Army could be relied on as a domestic offensive force against Iranian militias in Deir ez-Zor province and on the Syrian-Iraqi border. “The news came in light of mounting US pressure on the Iranian militias in eastern Syria. This pressure was backed by Saudi Arabia," it wrote. "Sabhan … promised generous support for the reconstruction of that province.”

Researcher Socrates al-Alou said Iran sees Deir ez-Zor as an alternative route for the Tanf crossing, which was seized by the United States. Tanf is home to a military base for the global coalition.

“Iran wants to control Deir ez-Zor to achieve its strategic project of linking Tehran to Beirut through Iraq and Syria," he said. “The US aims to block this [project]. For the US, the city is a connection point among its areas of influence in Syria in the northeast [Kurdish areas] where several American bases are deployed.”

The United States will also deter Turkey from expanding into eastern Syria, said Salah al-Din Bilal, director of the Asbar Center for Research and Studies.

“The US presence in a safe zone east of the Euphrates and the US-Turkish agreement on this safe zone will make the self-management [region] and the SDF immune to Turkey's ambitions, because Washington will be the most key player in the safe zone and will not allow the Turks to kill its Kurdish allies," he told Al-Monitor by phone.

In March, after the coalition declared IS defeated in Syria, military councils were established in Raqqa, Deir ez-Zor, Amouda, Qamishli, Hasakah, Dirik and Tell Abyad in northeastern Syria.

Journalist Noureddine Omar said, “The announcement of the formation of the military councils and the restructuring of these forces aim to ensure their participation in the safe zone that is expected to be established east of the Euphrates after a final agreement in this regard is reached between Ankara and Washington.”

Omar revealed Ankara and Washington were discussing the possibility of Turkey accepting these councils as a military wing in the safe zone. “This is in line with leaks about a real desire by Riyadh to include the SDF in the Syrian High Negotiations Committee. According to media leaks, the SDF was invited to the [anticipated] Riyadh III conference.”

More support is coming in from other areas as well.

The journalist Ahmadi talked about diplomatic delegations from France, Sweden and Norway that met with Rojava officials and promised to support them with service and humanitarian projects.

Meanwhile, the Syrian Observatory for Human Rights announced that the global coalition sent 280 trucks loaded with logistical assistance, vehicles and reconstruction equipment from northern Iraq to the SDF areas on July 14, bringing the total number of shipments that have entered the area east of the Euphrates to 1,730 since March.